AGAINST LINEAR TIME
by Douglas Messerli

John Kelly Time No Line / the performance I saw with Pablo Capra was at REDCAT (Roy and Edna Disney/CalArts Theater) on April 25, 2019

It is difficult to know how to describe John Kelly’s one-man performance, Time No Line, which I saw last night at REDCAT in downtown Los Angeles. That difficulty has partly to do with the fact that Kelly’s work is so many different things: a kind of muted autobiographical commentary (this particular work is based on his journals begun in 1976 and continuing into the present), a history of his involvement with dance (he performed briefly with The American Ballet Theater), art (for a while he studied with Larry Rivers), and music (he sings a couple of songs in drag and talks of his passion for opera), a kind of silent film presentation, and, perhaps most importantly, a testimony to the many friends he has lost of AIDS over the years. 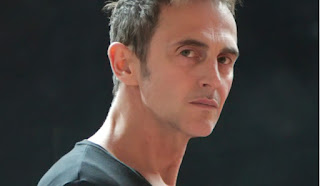 The lean and handsome Kelly has had a fascinating and often horrifying life. Playing, in the past, figures such as Joni Mitchell, Egon Schiele, and Caravaggio, Kelly was himself diagnosed as HIV-positive and broke his neck at another point while learning how to sing on a trapeze while playing the female impersonator of the 1920s, Barbette.

If there’s a sort of self-obsession about this work simply because the performer puts himself front and center as such a multi-talented actor, there is also a kind of humility in simply putting so many loves, endurances, and embarrassments together.
As reviewer Dan Callahan wrote in The Village Voice, “Kelly’s Time No Line is less about himself and more about the people he has lost.” The people of whom he speaks, some of them with whom I shared distant friendships, became ghosts that haunt his memory, and even when he is sharing his own artistic experiences, Kelly himself becomes a kind of ghost, explaining—or perhaps, at moments, self-justifying—his highly checkered past from dancing with ballet companies, performing in famed art venues such as La MaMa (where this performance appeared in 2018), The Whitney Museum of Art, the Walker Art Center, The Andy Warhol Museum, The Tate Modern and, as well in far less grand East Village venues such as Limbo Lounge, Pyramid Club, Club 57, and the gay bar The Anvil (where long before his 1980 performances there, I met my first lover, the year before returning to the university to encounter my husband of now almost 50 years.) 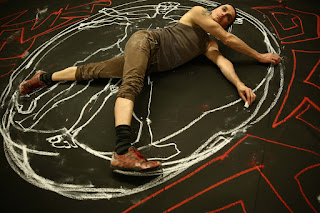 It’s a kind of heady mix to perform a song in one of his drag singer’s persona and in the next minute talk about Bush-appointee to the chair of the National Endowment for the Arts, John Frohnmayer who notoriously nixed NEA grants awarded by that year’s panel to Tim Miller, John Fleck, Holly Hughes, and Karen Finley.At one point Kelly chalks a kind of version of Leonardo Da Vinci’s The Vitruvian Man on the stage floor. 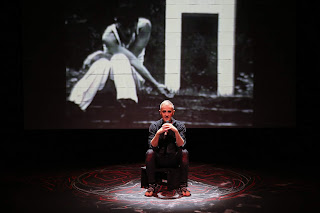 At moments Kelly reads from his journal before performing unscripted events involving props and interacting with his own images from his past projected on a back screen. It’s quite clear, as Kelly has described himself elsewhere, he is a “range queen,” a bit like performer Joey Arias (whom Kelly mentions in passing), a person who can, instant by instant, transform himself, a kind of artist-warrior who battles notions of gender and a notion of a coherent being.
To comprehend his performances you have almost to imagine a genius-child dressing up and acting out nearly every figure he loves before his bedroom mirror. Only, the fun thing in this case is that we get to be there, to share his wonderment of human life, even if so many of them people and events are now phantoms. Time, in Kelly’s world is not linear, but endlessly circular and even overlaid with both present and past.
The rather young—I think I may have been the eldest member of the audience—and sophisticated REDCAT attendees clearly assimilated and enjoyed Kelly’s chameleon-like work, even if they might not always know the figures of whom he speaks and enacts. This man/woman/ child gets to have it all along with the much deserved applause.