Douglas Messerli | "And Where Are You Now?" (on William Finn's and James Lapine's Falsettos)

and where are you now?
by Douglas Messerli

William Finn (music and lyrics) with a book by James Lapine Falsettos / directed by James Lapine at the Ahmanson Theatre, Los Angeles, the performance I saw was on April 17, 2019

When I first saw the “charming musical” Falsettos—as it was generally described in those days—at a small 3rd Street venue in Los Angeles, 19 years after its major Broadway musical production and long after its original introduction in off-Broadway in 1979, I perceived as a rather “chipper”—if you can possibly conceive as the work ending in the death of one of its central figures dying of AIDS as anything but possibly tragic—in part because of its important subtext of a Jewish family with
neighboring Lesbians and other related figures simply arguing, fighting, and trying to survive in a totally broken world with a marvelously ebullient young son, Jason (performed in the production I saw by the charming young Thatcher Jacobs and Jonah Mussolino—I believe Jacobs who was the character in the production I saw)—as anything but tragic, which was precisely what my theater companion, Lita Barrie, experienced it as when we visited the new, large-theater production at the Los Angeles’ Amundsen Theater on April 17th.  The cover of the Amundsen program, in fact, reiterated, sadly, this vision, identifying the tight-knit family with the “lesbians next door, and the “unlikely lovers,” and identifying the son as a “short insomniac.” Sorry, this no longer works for me.
For this time around, I knew what was coming—after all, the title of my first piece was taken from one of the most powerful songs of the work, sung by Dr. Charlotte (in this production, the remarkable, full-throated singer Byronha Marie Parham), “Something Bad Is Happening,” which presages the entire AIDs world, which I escaped just by the accident of meeting someone (my husband Howard Fox) after I left an active gay life in New York City a few days before the Stonewall events which I attempted to relate to my evening companion, insisting that if I hadn’t left New York those very days and hadn’t met Howard back in Madison, Wisconsin a few weeks later, I would have died soon after—given, what she described them in a strange euphemism as my “frisky days”—a behavior that I might have more likely described as common gay sexual, late 1960s joyful activities, something, incidentally, I have never regretted.
But knowing, now so many years later, what actually happened, and knowing how narrowly I escaped the death that the married man’s Marvin (Max Von Essen) later-life lover Whizzer (Nick Adams) suffered in his AIDs death, as I am clearly aware that so many other audience members recognized, I no longer saw this work as a somewhat randy comedy of Jewish love, life, and separation. Yes, those lovely ditties such as “A Tight Knit Family,” “March of the Falsettos,” and the second act “The Baseball Game,” “Everyone Hates Their Parents,” are all comic songs of familial love and failure. “The Baseball Game,” in particular is a lovely tribute to what American Jews see as their failures for not becoming a second generation of Sandy Colfax Jewish athleticism:

(everyone shouting various encouragements to Jason)

Given Whizzer’s sudden appearance (he is invited only by Jason) and through his advice to the boy, Jason suddenly hits the ball, yet sadly, forgets in his shock of the event, to even run, how cannot Marvin again fall again in love with this man? How it reminds me of my terrified experiences on the Little League fields of Iowa!
Or, given another comic example, the everyman/everyboy song sung by Jason’s psychiatrist step-father, Mendel’s (Nick Blaemire) marvelous little confidential confession to his now adopted son:

These and so many other songs of this work inure us to what is really going on, not only the anger between the two totally tortured parents—both of whom still love their child (and, perhaps, one another) but realize their paths have completely gone in other ways—who still are determined to make Jason attend to the Bar Mitzvah ceremony, which he, given their battles, now rejects.
And, far more importantly, their lesbian neighbors, particularly Dr. Charlotte who perceives what is really the essence of this work: it’s not simply the familiar differences, it’s the entire world that is crushing down upon gay, lesbian, and even heterosexual communities in a time in which the Regan presidency had utterly no commitment to the issues at hand:

CHARLOTTE:
People might think I'm very dykish.
I make a big stink when I must, but goddamn!
I'm just professional, never too nonchalant.
If I'm a bitch, well, I am what I am!

Just call me 'Doc', don't call me 'lady'.
I don't like to talk when I'm losing the game.
Bachelors arrive sick and frightened.
They leave weeks later unenlightened.
We see a trend, but the trend has no name.

Frankly, that song turns everything in this work ‘round, as we realize that the someone enchanting family differences of this formerly domestic “musical” transforms into a totally new context, which, I’m afraid, just left me in tears this time ‘round.
Because I met Howard so many years earlier and we had both left the gay bar scene, we did not, in fact, know a great many people who died in those terrible, terrible years of AIDs. We only saw it far afar, knowing that perhaps some of our former friends might have disappeared, expressed so poignantly in Marvin’s last song “But where are you now?” So many friends we’ve never every heard from again. Accordingly, this remarkable production brought tears to my eyes for my former self and all of those who I can no longer reach. “Stories echo underground.” Where have they gone? I miss them. 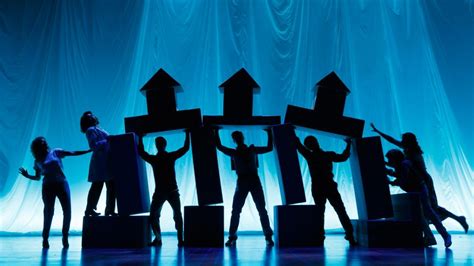 The amazing cast of singers and actors with only a small backup band—celebrated at the beginning of act two, along with the attendance of a large gay audience with the song “Welcome to Falsettoland”—help to create a true American opera, I realized this time around, that has almost no dialogue, and might be perceived as a kind of pop-opera in the tradition of Rossini, with elements of Wagner and so many other great opera composers of the past.
There is no question that William Finn’s and James Lapine’s musical composition and book don’t quite make claims to the greatest of American theatrical compositions. Lapine has worked with the far greater composer Stephen Sondheim in Into the Woods. But you need to forget all of that. This production, with a wonderful set that transformed seemingly with abstract (plastic or rubber?) constructions into sophisticated rooms and later into walls that might at any moment fall in upon these fragile characters’ lives, with excellent lighting by Jeff Croiter which helped make this large theater production at the Ahmanson Theatre a theater event into a work that was no longer “chipper,” but one which made me weep and weep.
The audience, particularly after the final significant aria, “What Would I Do?” to perceive the depth of this work, as Marvin sings not only of his personal loss but of the joys his nearly impossible relationship has allowed:

MARVIN (left alone):
What would I do
If I had not met you?
Who would I blame my life on?
Once I was told
That all men get what they deserve.
Who the hell then threw this curve?
There are no answers.
But who would I be
If you had not been my friend?

You're the only one,
One out of a thousand others,
Only one my child would allow.
When I'm having fun,
You're the one I wanna talk to.
Where have you been?
Where are you now?

Anyone who has lived through the 1980s or realizes what happened in those dark days cannot but leave the theater with a new devotion to the thousands of lives lost which this American opera sings of. No, this is not a family comedy—although it seems to attempt to cover its tragedy by pretending it is. This is an American tragedy that we now recognize was covered by the entire culture, a grand pretense that breaks the heart.
The opening night crowd seemed to recognize this, and rightfully applauded with standing ovation.

Posted by greenintegerblog at 2:38 PM