Nilo Cruz Anna of the Tropics / produced by OpenFist Theatre Company, performed at the Atwater Village Theater / the performance I attended was on May 5, 2019

The Anna of Nilo Cruz’s 2003 Pulitzer Prize-winning Anna of the Tropics is Tolstoy’s tragic figure Anna Karenina. Yet Cruz’s play overall seems more like a Cuban-version of a Chekov work—a sort of post-modern cut-up (Cruz studied with the great experimental Cuban-born playwright Irene Maria Fornes) of The Seagull and The Cherry Orchard with a dollop of Three Sisters thrown in.
The family business of these characters—Santiago (Steve Wilcox), his wife Ofelia (Jill Remez), their daughters Conchita (Presciliana Esparolini) and Marela (Jade Santana), along with Santiago’s angry half-brother Cheché (Antonio Jaramillo), and Conchita’s husband Palomo (Javi Mulero)—is cigar-making, the old fashioned way, rolled by hand, a process we literarily witness several times throughout this play. 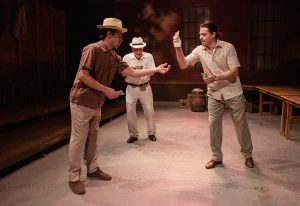 Even from the very beginning of Cruz’s work, we cannot help but notice tensions as Santiago and Cheché bet on cockfights, with Santiago, the small factory owner, losing his heavily to his half-brother, and then desperately asking for a loan with an agreement to pay it back by carving the amount and his own name into Cheché’s shoe. Cheché’s wife has previously left him, and we can guess why.
This family, moreover, is rolling its Cuban cigars not in Havana but in the 1929 Ybor City, Florida, a neighborhood of Tampa, with the Depression, we all know, a year away. Even family members perceive that the famed cigars they are creating are losing out to cigarettes (fags) smoked now by most of the movie stars. In short there is a sense of doom already hanging over their entire enterprise. They live in a past that is no longer relevant in the decaying American climate. 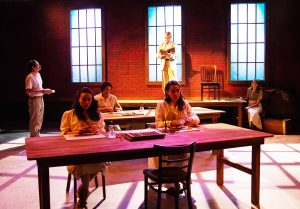 They stubbornly stick to their Cuban traditions, however, with Ofelia demanding they hire a “Lectore de Tabaqueres,” a reader who, while the workers repeat their endless manual activities, enchants and sometimes distracts them with wonderful stories. The lector she hires, Juan Julian (the excellent Byron Quiros) chooses to first read for them the great Tolstoy novel, which almost from the first page—a bit like Madame Bovary’s encounters with novels—begins to utterly change the women’s lives.

Suddenly, the romantic heroine’s passions and liaisons leaps from the cold Russian landscape into the humid factory in which they are entrapped. As the summer in which they are working grows hotter, so to do their emotions, as the handsome reader Juan fans the flames with his story-telling skills, resulting eventually in a sexual tryst with Conchita about which her philandering husband quickly becomes aware.
The men are suddenly less important in the mother’s and two daughter’s lives, and their macho attitudes begin to make demands on familial relationships. Santiago, somehow (we never quite know) finds enough money to pay back his debt, and tries to regain control of his small patriarchally based business by throwing a celebration, replete with rum, lanterns, and an announcement that he is creating a new blend of cigars to be called Anna Karenina, using his youngest daughter Marela, dressed in a mink coat and Russian hat, as the model for the new brand. Surely there is something slightly incestual about his sudden attentions. 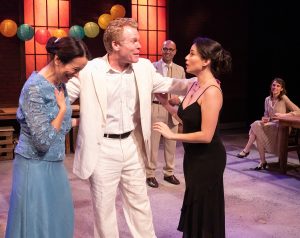 She is delighted, but her new costume and her natural beauty also attracts the disappointed and unstable Cheché, who, after desperately trying to regain control of the failing family business by introducing a machine which might take over the cigar rolling, angrily stalks away only to return and rape his half-niece.
Marela, shocked by the experience, now becomes the frigid Anna, wearing her heavy coat even in the tropical climate in which the family must labor.
Palomo confronts his wife Conchita about her affair, which she explains has only helped, in bringing love back into her life, to reconfirmed her love for her own husband by allowing her to feel more as a sexual equal. In a strange twist of story that Cruz only hints of, Palomo demands that she describe all her feelings when she is sexually involved with Julian, suggesting a kind of obsession with his rival, which, in turn, hints at possible homosexual feelings. Even his wife wonders about his continual interest in his rival’s sexual attractions. 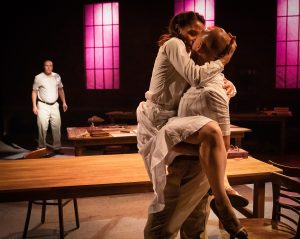 All of these complex issues literally boil over, in both Chekhovian and Tolstoyian ways—meaning that they become both somewhat comical and tragic—when Cheché, late for work (spoiler alert), suddenly arrives with a gun in hand, shooting Julian dead.

To reveal just how Chekhovian Cruz’s play is, the tragic-stricken survivors remain determined to keep their traditions. With no lector now in view, Palomo offers to continue reading Anna Karenina to the workers, thus further linking himself to Julian, finally taking over his role and perhaps his sexual allure to both the women and himself.
Director Jon Lawrence Rivera has brought this obviously ensemble-based cast to move in patterns that might even suggest a dance, entering, exiting, and returning together to work and play by using the entire Atwater Village Theater space. And scenic designer Christopher Scott Murillo has created a set that alternates between a sweat-house factory, a home, and a kind of cathedral (reinforced by the shifting colors of the lights by lighting designer Matt Richer). As for the costumes (by Mylette Nora), who can ever forget Marela in her heavy black coat in a world which the other figures dress in light whites?
Finally, I have to salute artistic director Martha Demson and the collaborative Open Fist group for continuing to produce such innovative and challenging theater.

Posted by Douglas Messerli at 8:54 AM