This past week I saw two famed plays each at opposite ends of Los Angeles, downtown and on the west side, that reminded me just how difficult it is to do iconic plays—works so memorable through previous productions or movie versions of them that it forces a knowledgeable theater-goer to compare them with what has come before them. Both Samuel Beckett’s Happy Days (performed at the distinguished Mark Taper Forum, the play directed by James Bundy) and Tennessee Williams’ A Streetcar Named Desire (at one of the most prestigious LA independent multiplex theaters, Odyssey Theatre Company, this production produced by Dance on Productions, directed by Jack Heller) recalled similar problems I had recently had with a local production of Long Day’s Journey into the Night, wherein, unfortunately, I kept comparing the actors to the impressive movie production, starring Kathleen Hepburn, Ralph Richardson, Jason Robards, Jr., and Dean Stockwell, directed by Sidney Lumet. 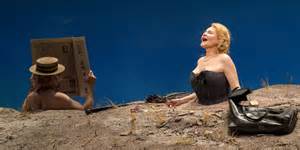 Fortunately, the case of Happy Days, the central actor was the remarkable Dianne Wiest, one of my favorite actresses on both stage and screen. Fortunately (or unfortunately, depending upon your perspective) I was too young to have seen the famed Ruth White performance of 1961. But I did, in 2014, see a quite marvelous production of this play in Pasadena’s Boston Court with Brooke Adams as Winnie, and her husband Tony Shalhoub playing a the one-line roll of Willie.
Whereas Wiest sped through her role, making the partially buried Winne a bit like a train wreck that has left her in the chasm from which she cannot escape, bringing into focus all of Beckett’s hilariously absurd lines—the Taper audience was clearly alert to even the subtlest of the author’s humorous jabs—Adams had performed the play in a kind of slow-mode, revealing the endless repetitions, a bit like Beckett’s Waiting for Godot, of a daily life performed while waiting to die, or to be buried alive. 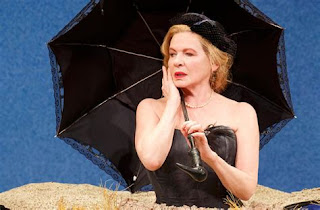 It’s not that Wiest isn’t almost perfect for this role, surely one of the best of her now long career; it’s just that I couldn’t help but compare the two performers and the bits and pieces I have seen on archival sites of Ruth White’s version. If Wiest brings out Winnie’s comic embracement of “the best of all possible worlds”—she is, indeed, a kind of student of Voltaire’s Pangloss if there ever was one—Adams was able to demonstrate the poignancy of living while yet representing the absurdity of the Beckettian trope of “I can’t go on; I will go on.”

Similarly, Michael Rudko as the Taper’s Willie, is a wonderfully comic figure, popping up from his hole just often enough to make Winne believe she is not truly speaking only to herself. And in the second scene with Winnie buried up to her neck, particularly, Weist and he came into their own, finally gently confronting one another and their fears. Weist’s attempt to encourage Willie to come near her so that she can better see him is a touching moment of love and utter frustration, which adds a dimension to her character that almost redeems what I had felt previously as her lack of voiced modulation. And that, in the end, have been the major problem for me: Weist is a genius when in comes to certain roles that demand a kind of one-level type of character: the Woody Allen wide-eyed and somewhat innocent woman or in the role of Honey in Who’s Afraid of Virginia Woolf? or even the wide-eyed Emily of Our Town; but although Winnie may be a Candide-like figure, she is also a salty pragmatist who has perhaps driven her husband and herself into their tapped lives. I never felt I heard in her voice the full dimensions of these two extremes.

Any company who might bravely present a new production of the great Williams’ masterpiece has my approval. And the Dance On group—with Susan Priver playing Blanche DuBois, the handsome Max E. Williams as Stanley Kowalski, Melissa Sullivan as Stella, and Christopher Parker as Mitch—has nothing but my admiration. 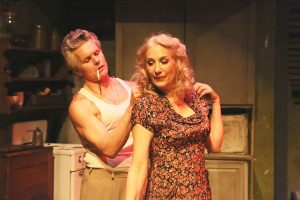 Surely they know that with legendary figures such as Marlon Brando, Jessica Tandy, Vivien Leigh, Kim Hunter, and others having literally defined their roles, that any revival can only compared in the minds of a mature audience. And the actors and director here actually gave homage, in part, to these figures, as well as the great original director of both the stage play and film Elia Kazan.
If the actor Williams can never quite hope to match the sort of humorous lowlife of Brando’s Stanley, he certainly looks better with his buff body than the more feminine-looking Brando. In this case, you can truly comprehend why Stella has stayed with him; he’s like a stupid-minded body that you can’t keep your eyes off. Stella, in this production is obviously addicted, just as her sister, to sex—without any of the good-girl Mississippi pretensions.
If Blanche, at heart, is all about desire, Stella with Stanley make such desires obviously apparent. And while I’ve always thought Kim Hunter’s Stella’s was a little slow-minded, Sullivan’s portrayal represents a lusty, level-headedness that demonstrates how she might be a good lover and mother for the rest of her life.
Director Jack Heller perceived from his other Williams’ plays such as Kingdom of Earth, just how much actress Priver was a figure perfect for the playwright, and here she gives a rather credible rendition of the Vivien Leigh figure, a woman on the way out who would like to pretend—and is deluded enough to try to pretend—that she is still a woman whom men might want. 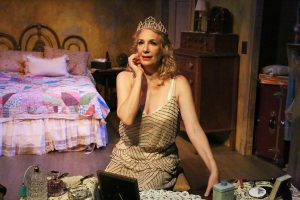 In the movie, the sparks flew simply because of the completely different acting styles of Brando and Leigh, the New School and traditional British character-acting traditions. And Heller attempts to repeat that, despite the fact that the former ice-hockey Canadian Williams has probably never been in the halls of such an acting school.
Indeed, this production has all the hallmarks of Kazan’s style. But in the process of paying homage, it misses much of the point of the playwright himself. Rumor has it that in the original Broadway production, the playwright sat in the back rows sniggering through the whole production. I believe it, but even if it weren’t true, it should be. For A Streetcar Named Desire is really a very funny play, with the “dumb Pollack” Stanley, with his ridiculous pretensions of the paternalistic Napoleonic Law squaring off with a totally delusional “whore” (she has, after all, lured even a 17 year old male student into her bedroom and perhaps has slept with every passing soldier and salesman that every passed through Laurel, Mississippi, all of this after, in her youth, having mistakenly married a handsome homosexual boy whose death she triggered) who now demands that the hard-working momma’s boy, Mitch, attend to her with chivalrous demeanor of a knight-in-waiting. She wants magic, while Stanley wants realism. It’s a truly hilarious dance, with poor Stella, the star come down to earth, caught in between.
And that is the problem with this production. If Wiest plays Winnie primarily for the laughs, this Streetcar plays out as a kind of dirge for a woman terrified—after an entire life of desire—of death in almost a Wagnerian fashion. But that isn’t Williams really. Anyone who could write lines such “The blind leading the blind,” or, even better, “I have always depended upon the kindness of strangers,” is also suggesting a kind of pre-Sontag notion of camp. Blanche is one of the campiest figures who has ever been put upon the stage, I’d argue. And this company makes it all so very, very serious, the way Kazan perceived it.
At least Heller doesn’t make poor Stella run with her baby up the stairs to her neighbor’s apartment. Instead, as Blanche meets the people from the insane asylum, this director sort of shuffles Stella and her neighbor off to the side, apparently on the street. But why cut the truly beautiful last encounter between her rapist husband and his wife which appears in Williams’ original version, which almost redeems both of them as human beings?: “Now, honey. Now, love. Now, now, love. Now, now love. Now, love....” This is perhaps the most tender moment that Stanley has in the entire play.
Once again, the standing-room audience loved the production, as with Happy Days, applauding the company’s opening night with a standing ovation—perhaps as they should have. I may just be, in the end, a grumpy critic who has seen too many productions of these works and can’t get the comparisons out of my head.
Yet, I won’t stop attending to these works and many other such iconic plays, hoping to find a production that makes me completely forget what came before it. Memory can be a dangerous thing, as well as a blessing; how I would love to see these works afresh.