Douglas Messerli | "After All, People Might Talk" (on Joe Orton's Loot)

In playwright Joe Orton’s comedies things usually begin bad and quickly get worse—or at least more frenetic. The “villains” almost win out in the end, while the pious forces of society such as the police and priests get punished, or more often, are simply exposed for being the true scoundrels working against the social order. Wild sexuality, homosexuality, incest, robbery, and even murder are treated by Orton as far more fun than a life of order and religiosity.
It is no wonder, accordingly, that his second play Loot, which first opened in 1964, drew outrage from much of British society. That it has been so often staged since (I’ve seen two productions just in Los Angeles) perhaps demonstrates how morality has shifted or simply how much fun his dark comic plays are. Certainly Orton’s version of black comedy completely altered the theater world—far, far more than the angry young men plays of John Osbourne and others or kitchen sink dramas of Arnold Wesker or Shelagh Delaney.
The new production of the noted Los Angeles theater Odyssey Theatre Ensemble, although a bit rough at moments in its directorial (by Bart DeLorenzo) timing, did not disappoint, even in the often audience did. 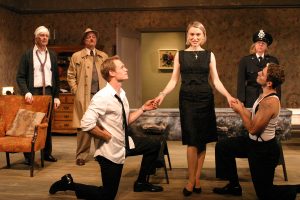 Any play that features two young gay men, Hal (Robbie Jarvis) and Dennis (Alex James-Phelps) who have just drilled through the wall of the funeral parlor where Dennis works to steal a large amount of “loot” from the next-door bank; a nurse, Fay (Elizabeth Arends), who has just done away with her patient, Mrs. McLeavy in order to marry that woman’s church-going husband, McLeavy (Nicholas Hormann); and an investigating policeman, Truscott (Ron Bottita) who pretends to be from the water board, and who apparently wouldn’t even wince at actually applying such a torture device, has my vote right from the beginning.

Truscott, evidently based on a real thuggish and abusive policeman, Harold Challenor, in Orton’s topsy-turvy world is the true force of evil in this farce, while even the sexual high-jinx of Hal and Dennis (one must recall that homosexuality was still banned in England and the Stonewall uprising in the USA was about five years in the future), their seemingly successful robbery, Dennis’ determination to marry Fay (he is clearly bi-sexual or perhaps, given his good looks, even pan-sexual) and even Fay’s murder (evidently not her first) can’t even begin to match the open brutality, lies, and abusiveness of Truscott. 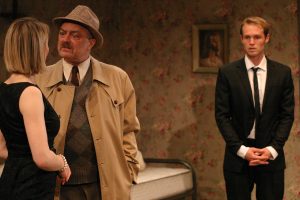 This is a play in which you truly hope the thieves and murderer get away with their crimes. After all, the boys need the money to settle down together, and Fay has once more run out of funds, while Mrs. McLeavy (Selina Woolery Smith) was quite clearly a blind, old woman already on her deathbed, and her cliché-spouting husband certainly might deserve a change of venue. Surely Mrs. McLeavy’s black dress, trimmed with an emerald lining (costumes by Michael Mullen), looks better on the young Fay than it might have ever on the old wife.

The central problem of this work is where to hide all that delicious cash. The gay lovers suddenly perceive there is no better place, particularly with Truscott mussing around while turning off the toilet and beating up Hal’s highly confused old Da, that the coffin would be perfect, but where to put the body already inhabiting that spot?
Despite Truscott’s endless attacks, they are mostly bluffs since he seems to be the most stupid and blind chief of police in existence, a bit like the one in Robert Altman’s film, years later, Gosford Park, a work obviously influenced by the likes of Loot. 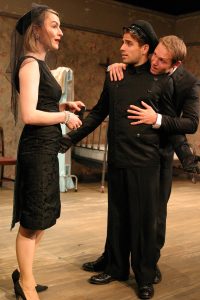 A lot of humor of this work exists in its endless site-gags, some of which, despite the generally excellent acting of the play’s characters, just didn’t quite come off. Yet the wit of Orton’s dialogue is so infectious that even the appearing and disappearing coffin and body, a bit clumsy at moments, doesn’t truly slow down the play much.
The problem is with any Orton work is to speak his outrageous witty lines without any attempt to give credence to their absurdity. This playwright’s fictions simply won’t survive with campy winks. Orton’s writing “pretends” to be as serious as Osbourne’s tortured couples, while all the time revealing the absurdity of their situations. The cast at the Odyssey primarily succeeded, but, once again, there were moments when the dialogue was perhaps slowed down a bit, or, even worse, sped up, going right past the audience’s ability to catch up with the satire. Orton’s plays combine post-modern wit and old-fashioned comic athleticism in a way that is extremely difficult to portray for young actors. And despite the director’s program declaration that Orton’s play has not aged, I’d argue that in the horrible cynicism in which we today live, the writer’s irony has been somewhat lost. 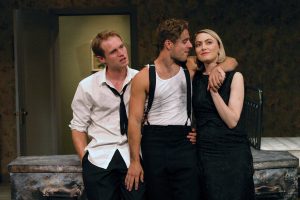 When the country has selected a president that behaves somewhat similarly to the policeman Truscott, making the rules up as he goes along, and might be very willingly accept a bribe of 30% of the loot, or even vindictively kill off the pious old coot who knows too much about the events, it has become a bit more difficult to laugh out loud.
And as in Harold Prince’s 1970 film Something for Everyone—another offspring of Orton’s comic outlook—it is Fay who finally whisks away the handsome young prince, Dennis, explaining that when she and he marry, it wouldn’t look right for him to remain with Hal: “after all, people might talk.”

Posted by greenintegerblog at 9:27 AM