a great opera brought into the repertoire
by Douglas Messerli

One might imagine that an opera with a plot that is more like a travelogue than a coherent narrative or story, whose set consists of a giant space-like orb, and songs without words primarily made up of what critic Bonnie Marranca has describe as encompassing “glottal effects, ululation, yodeling, speech song, and animal sounds” would be something one would not desire to sit through for several hours. Moreover, even the Joseph Campbell-like mythological adventure at the heart of Meredith Monk’s Atlas is not only vague (based somewhat on the life of adventurer Alexandra David-Néel) but, at moments, is downright hokey, with the small band of travelers and their spirit-guides encountering troupes of agrarian, artic, and desert dwellers before finally spiraling off into space that often combines a kind of silly symbolism with outright fantasy. Unlike Marranca, I am not a great admirer of the Modernist Symbolism.

Yet, sitting at Disney Concert Hall last night, both my theater-going companion, Deborah Meadows, and I agreed that we might have wished it would go on for even a bit longer, perhaps like one of John Cage’s Europeras. 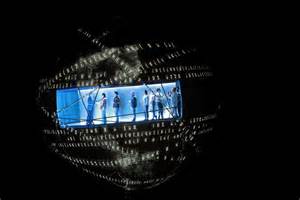 The first major production of Monk’s Atlas since its 1991 premiere at the Houston Grand Opera, this Yuval Sharon-directed work might not even been imagined as possible given Monk’s reluctance in this and in other works to produce performance scores, her own deep involvement in the work (in the original she played the central heroine), and her reliance on a group of performers with whom she had worked for years sharing her special brand of vocalization, choreography, and theatricality. 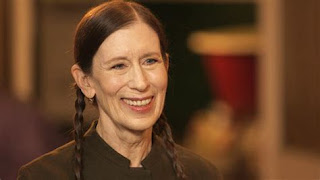 Indeed, as critics have long wondered, could a work Meredith Monk continue to exist without her? Monk may well have wondered that herself, and fortunately when Sharon, working for the past 3-years as a special conductor for the LA Philharmonic, approached her with the idea of reviving it, she agreed—with only one important stipulation: that she be in no way involved in it. From the smile on her face during a well-deserved standing ovation Tuesday evening, it was apparent that she was pleased by the results. As Los Angeles Times critic Mark Swed observed, Atlas had now been transformed from a Monk performance piece to an opera by Meredith Monk. And surely, given the success of this performance it will now be revived internationally. In this sense Sharon has given the world a new work to join the opera canon.

Nearly everything about this work succeeded. First there was the set design by Es Devlin, which stunned everyone in its imposing and eerie presence even upon entering the hall. His huge, 36-foot spacecraft orb not only served as a canvas Luke Halls’ projections of earth, moon, and extraterrestrial space, but through moving panels and retractable steps, served as a living quarters at times for the group of travelers on their way to and from their several journeys. 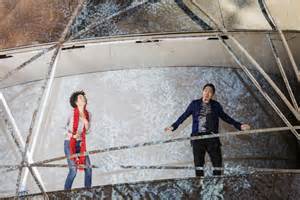 Beautiful choreography by Danielle Agami articulated Monk’s own vision of the relationship between music and body as did the sound by Mark Grey.
The space itself had been utterly transformed, as four front rows of seats of the theater had been removed in order to create a small pit wherein the LA Phil New Music Group, conducted by Paolo Bortolameolli, sat.
And then, most obviously, there was the glorious music both from orchestra and on-stage. Consisting of 25 short vignettes, the singers trace the early years of Alexandra (Milena Manocchia) living at home in Illinois with her parents (Kathryn Shuman and Jimmy Traum) to her (now sung by Joanna Lynn-Jacobs) numerous travels with fellow companions Cheng (Yi Li), Erik (John Brancy), and eventually the more self-centered Franco (Dylan Gentile) along with two spirit guides (Miguel Zazueta and Kelci Hahn).
In their voyages they encounter not only the different communities I describe above, but fascinating and horrifying figures that challenge each of them: a Hungry Ghost (Sharon Kim), an Ice Demon (Jessica Beebe), and a Lonely Spirit (Juecheng Chen).
By voyage’s end—after an absolutely glorious Out of Body Chorus, sung near the orchestra pit, an older but surely wiser Alexandra (Ann Carlson) returns home to quietly unpack her accumulated possessions. 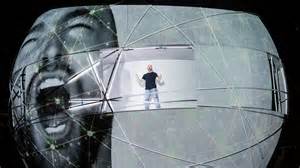 What is truly amazing is not only the truly unbelievable (and I do mean hard to be believed) singing by all cast members, but the fact that even without words we can truly comprehend their mix of vowels, rhythmic glossolalia, and complex vocalizations. Even the early opera mutterings of her mother and father are clear expressions of their fears and sadness for their daughter’s desire to leave them. And for all the yodels, screeches, shouts, and bangs, Monk’s music remains, almost like some Broadway ditties, in the ear. All night—a night in which our building lost all its electrical power—I kept hearing the opera’s musical refrains.

And as for its lack of a coherent “story,” well we all know the story though the experiences of our lives, the necessities of packing and leaving home. Even at my rather advanced age, I still have numerous dreams of planes, trains, and other forms of transportation which I’m using to take me away from and back home.
And most of us who have read the Odyssey will already know this story. Indeed, the mother in this opera, a bit like Penelope, is constantly knitting throughout the first scene. And the female hero must undergo some of the very same challenges that the Greek hero encounters. Only, as this version makes clear, it is only as an entire world community working together that we all are to survive our wanderings through life.
A lesson, apparently, that this new version of Monk’s great opera reveals to us through Sharon’s reinvention of her work. I hope that, before I die, I can see it again many a time.

Posted by greenintegerblog at 10:57 AM