Sarah Ruhl Eurydice / Directed by Frédérique Michel at City Garage in Santa Monica, California / the performance I attended was on Sunday, August 25, 2019

Sarah Ruhl’s 2003 play, Eurydice is a retelling of the famous Orpheus and Eurydice myth. But in this re-telling, it is the confused and quickly forgetting Eurydice who is at the center as opposed to her lover, the transcendent musician Orpheus.
Whereas, in the original Orpheus (here played by Johnny Paulino) is presented as the hero, rushing to retrieve his beloved wife who has suddenly died soon after their marriage, in this version the more important relationship for Eurydice (Lindsay Plake) is her dead father (Bo Roberts) whose letter from the dead is the lure that causes her death and her strange encounter with “A Nasty Interesting Man,” who turns out to be the Lord of the Underworld (Gifford Irvine). 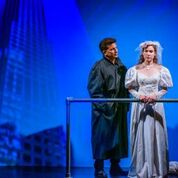 Somewhat inexplicably neither her nor her father have yet be washed in the waters of Lethe, which causes its bathers to completely forget their past. Her father, still fairly conscious, in fact, attempts to gently help his beloved to recall her past life, the meaning of self-identity, and the role she formerly played in both his and Orpheus’ life. But this is clearly a woman, far less passive and more impassioned than the character of the Greek myth, who is torn between the two great loves of her earthly existence. 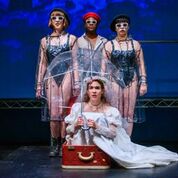 In her new transformation, despite conversations with her father, who attempts her re-education into being—and despite his own diminishing awareness, a condition one might almost describe as the elder’s slow fall into dementia or Alzheimer’s—Eurydice is left alone talking to the stones, Big (Marissa DuBois), Little (Emily Asher Kellis), and Loud (Brandon Reed), who generally listen but also advise her time and again, like the traditional Greek chorus, what is and is not allowed. The limits they suggest are awe-inspiring, and it is clear that despite her father’s gentle encouragement to explore the being she was, she will soon lose any power she might have remaining of her memory of her husband Orpheus’ musical talents. Besides, suggests Ruhl, she was not a very great musician, despite her lover’s extraordinary talents.

Yet it is her talking to stones that helps her realize her potentialities, and her limits. If she has no being in this world of death, unlike in the Greek myth, she gradually begins to perceive her past powers, and her capabilities of love both for Orpheus and her father, both of whom struggle without her existence. And, ultimately, as we know from the ancient story, Orpheus does come to retrieve her, amazing able to convince the Lord of the Underworld to release her because of his musical talents. Even death, it is clear, retains the nostalgia of great music—which should tell us something of our own times. Music (as well as art, theater, dance, poetry, fiction, performance, and so many other arts) are the only way out of a society devoted to death, or, perhaps, even the decaying the brain as moves into death itself. Alzheimer’s patients seem to respond more positively to music than any other stimulus, except perhaps for the human voice. Ruhl is obviously playing with both of these possibilities. 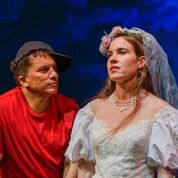 Much like the hero of the ancient myth, however, Orpheus is nearly all bravado. Told that he may not turn back to see if Eurydice is following him in their escape from death, he, like many a doubting male, turns back to see if she is still following him out of Hades. It means that she will disappear, this time dipped into Lethe’s murky waters, and resulting in his own death, both of her beloved figures, along with Eurydice herself soon after losing their ability to comprehend the past or even those who were important to their lives on earth, as they fall into eternal sleep.
The City Garage production, directed the unconquerable and talented Frédérique Michel and produced by Charles A. Duncombe, uses metal steel bars and gray carpeting to design their set; perhaps not a bad choice given the gymnastics that these tortured characters must endure. They are, after all, in the hands of greater gods that living forces them into calisthenics in which no normal human might survive.
The acting was just fine for Ruhl’s quieter and more disturbingly troubling perceptions of the ancient story. But I was distressed by the fact that this small Bergamot Station-located theater was sparsely attended at the Sunday matinee at which I saw it. 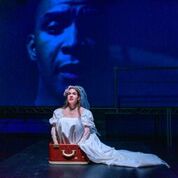 If Sarah Ruhl is not my favorite playwright, this production should be seen. And this small company has produced some of the most innovative theater to appear in Los Angeles, including significant works by Eugene Ionesco, Heiner Müller, Boris Vian, Charles L. Mee, Rainer Werner Fassbinder, María Irene Fornes, and Mac Wellman, among many others. Along with Redcat, Rogue Theater, and several other smaller theaters, their productions are what make Los Angeles such an exciting place for new theater. Please rush to this production while it runs through September 15th.

Los Angeles, August 29, 2019
Reprinted from USTheater, Art, and Performance (August 2019
Posted by greenintegerblog at 9:55 AM