María Irene Fornés Fefu and Her Friends / Directed by Denise Blasor at Odyssey Theatre Ensemble / the production Howard Fox and I saw was on Sunday, August 18, 2019.

In 1935, at the prelude of World War II, 8 women gather into the living from of their friend Fefu, ostensibly to discus an upcoming charity event, but in fact to get in touch with one another. These are seemingly strong women, particularly the host, Fefu (the endlessly vibrant Tiffany Cole), who like Ibsen’s heroine Hedda Gabler, packs a gun—in this case a rifle, a more dangerous weapon simply because of its wider reach—along with the towering and funny Emma (Syndey. A Mason), and the powerfully smoldering former lover of Paula (Cynthia Yelle), Cecilia (Jennifer Lee Laks). Others, including Julia (Sandy Duarte), and Christina (Domonique Corona), represent more fragile figures, particularly, the wheel-chair-bound Julia, who has inexplicably been shot when a deer was killed near to where she was standing. 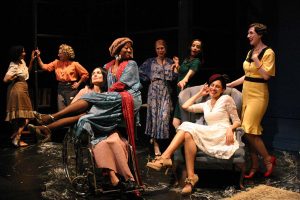 If these are amazingly strong women, speaking their own minds in a language that is quite non-normative, they are also frightened, frustrated, and nearly immobilized not only by the patriarchal structures in which they have to live in order to survive, but also because of the horrors they’re truly unable to face: Hitler’s invasion of Europe even as they meet to discuss their good intents.
What the marvelous playwright, María Irene Fornés, who is behind their gathering, as well as the audience’s collection into Fefu’s sprawling but well-contained house, shows us, is these remarkably clever women are as strong as weak as the society about them.
They drink, gossip, and spout their visions, beginning with Fefu’s off-hand remark, “My husband married me to have a constant reminder of how loathsome women are,” challenging each other with the audacity of their honesty, but also with their open wounds, their expressions of just how difficult it is to cope in a male-dominated society that treats these witty and fearful women with contempt. Early in the play Fefu goes to the garden in order to shoot at her missing companion, Philip. 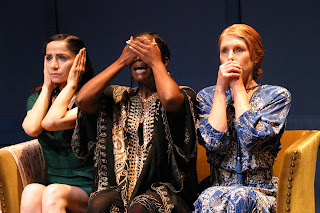 If the vivacious curly-headed Fefu seems to be in charge, serving up heavy liquor, sandwiches, and later, coffee and tea, appears to be in charge, it is actually Emma who rules this roost, or perhaps even the apparently weak and lost sufferer Julia, who has learned how to cope, and recognizes the difference between those who scream at you and those who scream deservedly in response. Although Julia seems to be completely unable to negotiate her way through life, at one surrealist-like moment she suddenly appears to walk easily in the room in which Fefu is sitting to retrieve the sugar, no wheel-hair in sight.
If this might, at first, appear to be a kind of realist play about the pre-World War II period, the audience must abandon its pretensions. These characters are all somewhat “figures,” a bit stereotypical, who represent different poses women had to adapt in order to survive and would become even more embraced in when the soldiers of World War II returned home. They know, quite clearly, as is played out at one moment, to see hear and speak no evil—meaning to ignore their husbands and other male’s taunts, to pretend not to see their horrible actions, and never ever to speak of them. This is a very early (1977) #MeToo statement. Whatever the male does cannot be spoken of, not so very different from the early 20th century prohibition of gay love, of which could not be spoken, an issue her only because some of these women are lesbian.
Fornés’ amazing play not only introduces these fascinating women to you, but forces you through a trot through private rooms (after the introductory first scene, the audience is broken up into rooms who are then in different sequences, taken to other mini-rooms to hear interchanges of two and three of these women at a time—while accidently overhearing some of those same dramatic events from behind and across their transverses—and which also explains why this play is so very seldomly performed. The Odyssey Theatre, itself a warren of smaller theater spaces, is just perfect for such an event! 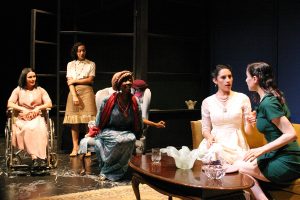 Yet, it is a bit concerting to be broken away from your other audience members and taken into private chambers where you certainly know you do not belong, and in which are revealed loves and passions that you would not have otherwise imagined. But that is, of course, Fornes’ point. It is not so much an “immersive theater,” as some critics have long argued, as it becomes suddenly a theater of voyeurism, maybe even embarrassment, as some characters describe their failed relationships and lost loves. My only problem with these scenes is that they make these iconic figures over as slightly psychologically realist figures. And I don’t think that accords with Fornés’ intent. As in Jane Bowles’ perfect bewildering play 1951/1953 play In the Summer House, these figures are unworldly, not tortured beings from 1935—even if they are, indeed tortured. Although I loved Denise Blasor’s savvy and somewhat sassy direction, it could simply have been a bit more deft, with a lot more blurring of the superficial realism of Fornés’ work with the far more inexplicable perceptions that show up in Bowles’ strange drama and lay just underneath Fornes’ work.

Just to see a new production, however, was enough to engage me. You can read it, as all drama students from 1980 on have been required to, but you do need to experience it, to get yourself up and walk through those haunted avenues of these lovely women, fearing, hating, and being forced to unnecessary subjugation.
If you shoot off a gun in the first act, so Chekhov insisted, you need to do something with it in the last act. Fornés, who argues she never much paid attention to Chekhov, nonetheless, obeys his dictum. After finally challenging “the victim” in the wheel-chair for her fraud, Fefu takes up the rifle to shoot another deer, this time killing her friend Julia, totally inexplicably, in the process. One might almost argue that is the “killing of the sacred deer,” the friend she has so long protected who finally needed to be put out of his misery But it is actually Fefu’s own death she is actualizing, having lost the love of her husband, a man whom she feels is utterly necessary to define her existence. Julia may die, in the terms of the drama, but it is really the stalwart Fefu who is destroyed in the process. Men are not necessary, despite her protestations, to make a woman a full human being. Fefu, it turns out, is a being of the past, while her dear friends are blindingly pushing toward a new future.

Posted by greenintegerblog at 1:40 PM