While Erik Patterson’s new play, performed the other afternoon at the Echo Theater Company’s venue at Atwater Village Theater in Los Angeles, is not precisely a major theatrical masterwork, it is, nonetheless certainly an intriguing work, which will allow you to leave the theater with a great many questions about gay sex, sexual exploitation, sexual abusiveness, racial identity, and the white community’s inability to perceive racial concerns—as well as what writer’s do to individuals in involving them into their literary “plots.” There’s lots to chew on here, and lots of issues that simply cannot be answered by either the author or his audience.
First of all, the play itself seeks out the limits of sexual taboos in theater. Certainly, we’ve seen nudity in theater numerous times in the past decades, and audiences have perhaps grown rather more sophisticated than the early days when this kind of theater might simply have been closed down—just as were numerous art exhibits, performance pieces, films, and other art works because of their depictions of nudity, let alone, as in this case, gay nudity. We can breathe a little bit more openly, and none of the audience members of this production, male and female, gay and family groups (no children that I could perceive) hardly blinked an eye when the major events of this production occurred, although many of the audience members certainly might have been mildly titillated, as was I. 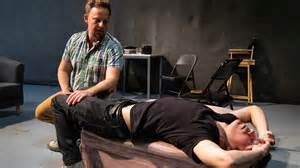 After all, the major premise itself is a slightly kinky one: a handsome and well modeled black man offers himself up to his basically gay clientele as a “shirtless cleaner,” a self-proclaimed heterosexual man, Eddie (Michael Rishawn) who will come and clean your house while, having whipped off his shirt, he allows his customers to simply gaze upon him. Given his well-developed torso, he is, indeed something to see, but one has to question what any of his customers get out of the encounter. Even at age 72, I might wonder what pleasure there is at observing a beautiful man without, at least, being able to touch him or at least fully communicate with him. But Patterson’s major figure, Keith (Steven Culp), a playwright—or as he describes it, a writer of dialogues—basically doesn’t seem to mind his passive state. After all, he lives surrounded by dozens of books, many of which he has not yet read, and cannot reach out, it appears, to really discover why this beautiful being is selling himself into this most strange situation. What is Eddie really doing in the act of allowing himself to be paid by the gay gaze? The problem with Keith is, that despite his fascination with the young man, he seldom asks questions, and when he does it is mostly just an interest in furthering his “studies” of such a being, without really probing the man/boy behind them.

Of course, that is also the problem of the play, which Patterson makes clear by embedding yet another play within his own, this created by Keith based on his not terribly profound knowledge of his subject. In his “play” version (and “play” is a good term here, since it is not simply a theatrical event, but a playing with/and out of his supposed encounters with his shirtless cleaner.) In the play, another shirtless cleaner, Bradley (Ryan Nealy)—in this case a white boy—hires himself out for the same tasks, in the same set, to Kevin (Stephen Guarino), but is willing to go a bit further than Eddie, for another $40 dollars willing to drop his drawers, and for yet the same amount again to allow Kevin to give him a hand-job as long as lips don’t touch his cock.
The scene where he undresses and lies on the bed with a full erection (from my vantage point in the audience I couldn’t quite determine whether his erect cock was an appendage or real, but given the argument of the play, we should presume that the actor actually gave us the full thing); but a bit like Eddie, the “real” was simply too much for him, particularly when the actor playing Kevin actually takes out his own penis (obviously the real thing) to masturbate as he gives pleasure to young man.
Bradley, suddenly, mid-coitus so to speak, balks, shouting out that Kevin’s action was not in the script, and refusing, accordingly, to continue the sexual act. The director, black feminist Susan (Tamara Graham) and her assistant, Kate (Gloria Ines) immediately enter the scene to try to convince him that Kevin’s impulsive act was justified, and to remind the actor that, after all, as they had argued in rehearsals, it was important to the play to see two gay men actually “touch” one another; the playwright, Keith also appears to justify his sexual depiction of their sexual, particularly, he argues (somewhat ingeniously) given that our culture is perfectly willing to witness hundreds of scenes of gun murders without being able to accept the act of two men attempting a sexual act before the public eye.
The recalcitrant, now dressed in a robe, Bradley continues to refuse the “hand-job,” forcing us, ultimately, as in a Wagnerian opera to experience the grand (but rather paltry) sexual act as “coitus interruptus.” 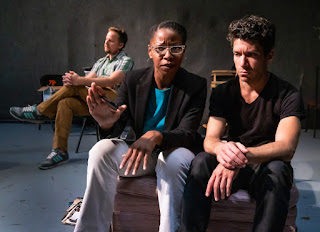 In the last scene of the play, Keith, still hiring the “shirtless” cleaner, highly intelligent Eddie, who has now apparently seen Keith’s play, and is angrily appalled by its use of his own life story. There are several issues at work in this last scene: one, that happened earlier in the play, is that at a certain point when he was agreeably cleaning and smilingly approving of his “sexual admirer’s” gaze, Keith attempted, momentarily to grope him. When Eddie is offended, Keith immediately apologizes and withdraws. But, apparently, Eddie has not been able to forget it, and reminds Keith now of his action.
This might be a kind of #MeToo moment, is a world wherein we finally realize that Eddie has, in fact, been working as a kind of prostitute all along, working in a “don’t touch me world” in which he is encouraging just that. How can a man whose clientele includes mostly gay men who long for his body not perceive himself as encouraging their sexual involvement? It is all a game that is not whatsoever about power and celebrity that one might accuse individuals of sexual abuse? And, indeed, there truly has been no “real” sexual abuse, but simply a response from what even the audience might perceive as a sexual come-on. What is truly happening here, when Eddie suggests he will reveal Keith’s action on Facebook and other sources as being a sexual abuser?
In fact Eddie has not lost any sexual innocence but has been denied his own identity. Keith does not truly see him as black and has hired a white actor to play him, insisting, like so many stupid liberal whites before him that he sees Eddie not as a black man but simply as a human being. But, of course, Eddie, is most definitely black, and that the fact that Keith has used him as a character in a play, replete with many quotes that have come from his own mouth, has wiped his true existence away. Playing with the playwright, Eddie presents him with several alternatives of himself—none of them with the playwright might have imagined, and perhaps none of them true: he is a Microbiologist or a student at Julliard studying playwrighting. Does it matter that he is truly, perhaps, just a prostitute, selling his torso to gay men?
Yes, it does matter. Both have helped to destroy each other’s lives, when if they might simply have unclothed themselves and laid down in a bed, it would have resolved everything. This, ultimately, is a play of sexual frustration, of people who can’t comprehend that there’s simply nothing wrong with loving and touching and being with one another, black or white. Keith has no power other than his checkbook, and Eddie has no sexual discord other than that which lies behind his highly defined own torso. Both may be destroyed by the sexual limitations of the society at large; but why, we must ask? Neither have any power in their worlds. But they might truly enjoy their sexual empowerment in bed.
The hand-job should have been completed, even if it isn’t the ultimate of sexual pleasure. And yes, give the other guy a moment of pleasure as well. Why are we rejecting pleasure and embracing the guns that assure us of a Wagnerian death? We don’t need to die to experience love, do we? And are we all perverts for seeking the pleasures of human flesh?
What is the difference between sexual interchange and abuse? What is the difference between liberal values of racial differences and the inability to perceive what being black, or any other color means in a basically all-white world? Living in Los Angeles, I don’t truly have those answers, since I do not live in an all-white world, nor did I as a young gay man in New York City. Was I an abuser in a world in which, to me, as an attractive young male, everyone seemed to be gay? No one every told me to stop! No one ever once said, you’re abusing me by hugging, kissing, and touching my cock! And certainly, I never felt once that anyone who came on to me was a sexual abuser, even the sometimes older men who loved to gaze at my youth. 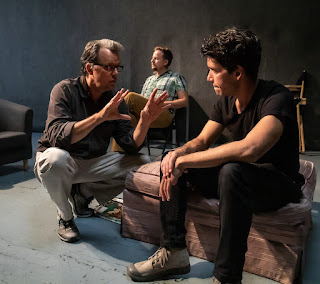 Something has shifted, it appears to me, as we have grown into an increasingly frightened world, afraid of even dealing with one another’s bodies. Perhaps in hindsight, I might have thought of myself as desecrated. I never felt that, only enjoyment for being a young man who enjoyed others and whom others seemed to enjoy me. This play brings up those questions. Maybe we are now all a little too hardeneded—and I’m not talking about the serial abusers such as Harvey Weinstein and Donald Trump—to even explore our own sexualities. Poor Eddie, working as a kind of male prostitute didn’t comprehend that he had already given up his identity, or perhaps, could not even accept his own identity.

Patterson suggests that in the play within this play, there is a brutal fight between the confused sexual being and the one seemingly accosting him. That is a terrible possibility, but perhaps a better one than the horrible outing Eddie proposes on Twitter and Facebook, the social communities we have now created to keep people from being who they might truly be. Maybe actually touching, even brutally, might be a better solution.
Los Angeles, September 10, 2019
Reprinted from USTheater, Opera, and Performance (September 2019).

Posted by greenintegerblog at 8:14 AM