In my 2018 review of the Los Angeles dance company BODYTRAFFIC, this year and next the company-in-residence at The Wallis Bram Goldsmith Theater, I promised, without recalling it, that I would be attending their next performance. Yet so I did. And what a remarkable experience that was last night.
Their final number, “A Million Voices,” based, in fact, on the voice of a single American singer, Peggy Lee, I reviewed in my 2018 essay (see My Year 2018 and my site at USTheater, Opera, and Performance, https://ustheater.blogspot.com/2018/06/douglas-messerli-lets-keep-dancing-on.html) so I will not talk about it here—although it clearly retained its charm and warmed the hearts of the theater’s nearly standing-room audience. 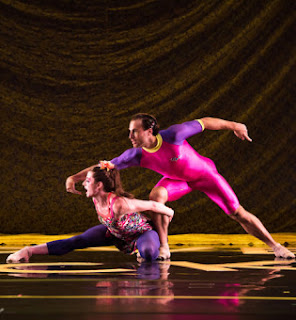 What stood out in this production of 4 dances, 3 of which were west coast, US, or world premieres, was that this wonderful company headed by Lillian Rose Barbeito and Tina Finkelman Berkett—Berkett also the lead dancer of the company—is the growing maturity of their work, their ability to take on quite seriously narrative work, and their extraordinary abilities as dancers. This company, particularly in the first work of the evening, [d]elusive minds, which is based on the true story of a mental patient suffering from a kind of schizophrenia “where the person becomes convinced that a family member has been replaced by an imposter” (think of Don Siegel’s film The Invasion of the Body Snatchers, wherein nearly everyone has the mental illness described as Capgras Delusion). In this case Santiago kills the wife he deeply loves and continues to write to her from prison for 15 years, believing in his “illusion” that she was still living.
Choreographed with a marvelously beautiful set by Fernando Hernando Magadan and almost delirious lighting by Peter Lemmens, dancers Berkett and Guzmán Rosado play out the signature movements of this company, almost body-defying shifts of body over body, with hand movements that convey so much of the intensity of the narrative. These dancers move over, around, above, and through one another in a way that seems to almost defy gravity. This dance is so beautifully intense that when the murder actually occurs we almost perceive it as blended into their love. They are not only a couple, performing an intricate pas de deux, in this performance they dance as a constantly shifting “one,” until you can almost comprehend why the mentally-disturbed male might think that the “other” is no longer the woman he loved. She has become him, and the dance conveys their impossibility to separate identities through nearly incomprehensible overlays of legs, arms, and other body parts. No matter how you might want to distance dance from sexuality, in this company’s performances the dancers make it clear, without the sexual winking of someone like the choreographer Matthew Bourne, there is no way to separate the pairs or, in the case of the delightful visit to the beach in Snap, the second of the company’s works, an entire community, from representing an intense sexual interchange. In BODYTRAFFIC, the bodies and their constant mutability is everything. 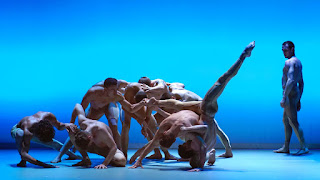 Snap is a kind of lark, a visit to the beach but also just a dip into the waters of everyday life by the entire cast of Berkett, Joseph Davis, Haley Heckethorn, Myles Lavallee, Rosando, and Jarma White—some in beach-wear, others in festive costumes, umbrellas allowed, accompanied by the somewhat harsh sounds of Schocke, counterbalanced by the sometimes silly terpsichorean movements by choreographer Micaela Taylor that obviously just represent fun. But again this company’s “just fun” involves serious gymnastic interchanges between company members. The complexity of this was truly amazing, which my theater-going friend, Diana Daves, commented on: “How can they possibly remember all those different movements?” Well, that is one of the wonders of this company. I would be hard-pressed to imagine how any other company might recreate this dance. Let us hope they have recorded it in chorographical language.

After an intermission, performers Davis and Rosando danced Resolve, who in Wewolf’s choreography, come together, push away, come back, and crawl gradually over and above one another in a relationship that at moments seems about to dissolve before transforming this couple into a kind acknowledged unity that cannot be denied. Isn’t this the story of any intense relationship? Surely is has been mine.
Of course, A Million Voices, with Peggy Lee’s standards brought everyone to a standing ovation. But, in fact, I realized even by the intermission that this Los Angeles audience was far more sophisticated about dance and that just as in its orchestral and art worlds, this city is now truly quite involved in dance theater. A city with such significant film, food, dance, music, and art—who could ask for anything more, even if I am primarily a literature person? I can only commend The Wallis, the Broad Theater, and now Redcat for their embracement of dancing.

Posted by Douglas Messerli at 9:58 AM