Al Carmines (based on Gertrude Stein) In Circles / directed by David Schweizer at the Odyssey Theatre Ensemble, the production I saw was with Lita Barrie on September 22, 2019.

Gertrude Stein’s A Circular Play: A Play in Circles (1920) as adapted by the amazing composer/preacher Al Carmines, minister and assistant director of Judson Memorial Church’s remarkable contemporary theater and dance performances, is quite obviously about “circles,” all kinds of circles, visual, social, political, personal, communicational, and, yes, natural. This work is not literally about “turning in circles,” for as Stein writes: “It is not necessary to run around in a circle to get to write a circular play.”
No, Stein’s circles, as in all of her works, represent clever literary puns, ridiculous maxims, and literary constructions (“Sleeping in the day is like Klim backwards. / Klim backwards is milk just like silk.” Silk backwards would be kils, a shortened version of the end of life. 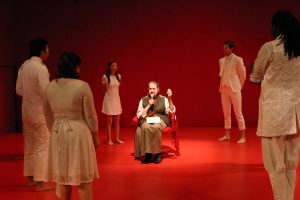 And indeed, despite the Stein-like figure in this wonderfully directed David Schweizer production, who demands of her participants a continual manifestation of circles, the poem/play continually challenges her invitationals to communal relationships with opposite notions of what circling might mean. The musical, in fact, begins with a total lack of communication wherein “Papa dozes manna blows her noses” (which can’t help but call up the crazy language play of Gene Kelly’s satire of the voice teacher in his Singing in the Rain, clearly based on Stein’s writing: “Moses supposes his toeses are roses. But Moses supposes erroneously.”).
It is apparent that the Stein figure in this musical (Jacque Lynn Colton) is not exactly pleased with her choristers’ (the engaging Henry Arber, Shelby Corley, Ashlee Dutson, Kyle G. Fuller, Chloe Haven, Aaron Jung, and P. T. Mahoney) continual repetition of the incommunicative couple, the one dozing the other busy blowing her noses, and she quite willingly demonstrates her disapproval, attempting to move this wonderful cast of 4 young men and 3 women back into the circles she might imagine them inhabiting.
Like Dante moving through the various circled levels of heaven, she tries to instruct them on the various levels of circles, the first simply a close relationship of words in the language: “A citroen and a citizen. / A miss and bliss” (if one thinks carefully about them, they are absolutely natural connections outside of their rhymes and off-rhyme connections). 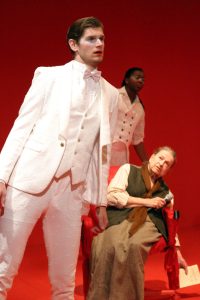 Yet soon after, they and her move into the “third circle,” which also challenges the very notion of what circles really mean.
Stein, always a strange optimist, declares “We can be won to believe that the President saw through the trick,” meaning the fact that World War I was never a “circle.” But she follows it up with the truth: “Miss Mildred Aldrich is isolated. Is isolated with the President.”
Aldrich, who became a close friend of Stein and Alice B. Toklas, moved from Paris to the Marne, in which, through collections of letters in three volumes throughout the war revealed the events in the Marne area of France from her viewpoint (a role that Stein herself would take on in World War II) that resulted in her award of the French Legion of Honor. A fourth volume of writing, When Johnny Comes Marching Home (published in 1919) recounted the grim reminder of what might happen to these World War I US soldiers upon their return home, something Stein would later attempt to recount in her brilliant post-World War II book, Brewsie and Willie.
Stein herself declares the difficulty of wartime living:

We came together.
Then suddenly there was an army.
In my room.
We asked them to go away. 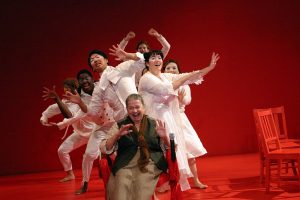 So despite her adamant demand for circles of all kinds, there are constant reminders of other movements into “streets” and “roads,” that counter her inclusionary vision.

Early on, Carmines creates a kind of painful tribute to her single line: “Cut wood cut wood. / I hear a sore.” in which we perceive the constant drill of the cutter against wood contradicts everything which she is promoting. It is a painful moment, and we understand in those brief, but important sequences, that her whole would is being challenged in the action of the saw, as she cries out:

Stop being thundering.
I meant wondering.
He meant blundering.
I have been mistaken.

Stein’s delight in social (including even royalty), political, and natural circles keeps being interrupted—at least in Carmines’ brilliant take upon this work, by linear actions in life.
“Jessie Jessie is not messy,” almost sounds like a line from the Stephen Sondheim musical Follies, for we realize in that line that Jessie with her old carriage is quite problematically “messy,” not at all willing to join the circles Stein is advocating. 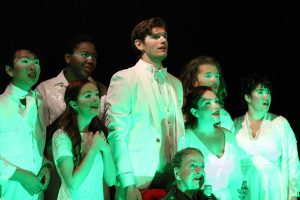 At one point the “circles” transform into various marriage ceremonies, but as blushing brides run to take on the bridal veil so too do several of the male figures; rejection is as common as acceptance. Ultimately some actors (Kyle G. Fuller) and others link up with other male performers while the most reluctant George (Arber) marries a young woman (again almost reminding of Sondheim’s Company). These clearly are not precisely the circles Stein is seeking.
Ultimately, it is to nature to which she finally retreats, a world of melons, honeysuckle and peas, roses, the moon, and even the sun. Human relationships, as much as she admires them, do not last. Even Stein, in the end must ask, “Can a circle exist.” It is a statement without a question. Of course, for her, circles do very much exist. And the lovely dancing, singing cast have proved that, moving around and about her (with amazing choreography by Kate Coleman) as if to establish the pattern of her short play, largely expanded by the brilliant Carmines, and the set by Mark Guirguis, who turned everything on the set to a deep red, suggested I imagine by Stein’s own comments: “Crimson rambler,” or in another version of her “Circle three”

Red on it.
It is strange to distribute it to the women. They can see around it.
It makes them young.

I presume this is another circle, of all women, who have had to deal with menstrual blood. 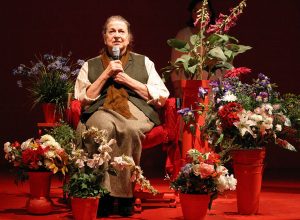 Despite her adoration of circles, however, Stein is not absolute. As she notes: “Do not try circles exclusively.” Her vision, indeed, is more like Wittgenstein’s noted “duck-rabbit” illusion, in this case described by Stein as “A dog with a rabbit,” not with the dog necessarily capturing the rabbit, but becoming it himself. “How can you tell a treasure,” she asks. For her it is a thing a visceral reaction: “We can tell by the reaction. And after that. And after that we are pleased.”
In short, reality is all about perception for Stein. A circle is certainly very pleasant, but “The balcony is air. You can put five persons on it.” A world that is not precisely a circle is nearly as good as one. An island that is not quite circular is close enough.
In the end, despite her proclamation that she does not see the need to bring flowers, all of the cast members do bring her flowers.
The performance of this spectacular play I attended had fewer people in the audience than on stage, where the performers danced, sang, and sweat out their performances. That’s sad. Critics need to learn how to describe Stein’s (and in this case Carmines’) wonderful productions (he did a great many Stein plays and pieces). This may have been the best production of drama I have seen this year in Los Angeles.
For my review of Carmines’ amazing collaboration with Irene María Fornes’ Promenade, visit here: http://ustheater.blogspot.com/2014/01/douglas-meserli-very-long-walk-on-maria.html

Posted by greenintegerblog at 12:12 PM