During the night of September 20th, I dream a long dream in which I was dancing—at first making miraculous leaps in the manner of Rudolph Nureyev and Mikhail Baryshnikov, but then gradually settling into amazing spins, something that I might have associated more with ice skating dance than with ballet. The spins were startlingly tight and intense, a bit like a balletic version of the Turkish whirling dervishes, but without their flowing, whirling skirts; I seemed dressed in a more traditional male ballet outfit that represented more of a continuously spinning top instead of the mesmerizing, trance-like movements of the Turkish dancers.
I have long loved dance, and when I was young I studied briefly with the Joffrey Ballet, as I’ve written elsewhere, after being encouraged to take up dance by Paul Taylor, who I met briefly in Madison, Wisconsin in the late 1960s. In New York, I signed up with the Joffrey company as a student, and after weeks and weeks at the barre doing the traditional dance exercises, the males were called to do a pirouette, my strict dance teacher commenting that I had done it quite well, a comment that thrilled me, even if soon after I began to realize that I would be a great dancer given the structure of my body and my late-coming to the art. So, while dance continues to thrill me and I attempt to review it as often as I can, I have never since—particularly as a now quite fragile 72 year-old with a knee replacement—dreamt about me dancing so brilliantly as the images of my dream contained.
Perhaps the dance-opera, The Want, directed by Adam Linder, which I’d seen a night earlier, stimulated something in my brain. And I was delighted, even if more than a little amused, by my sleeping terpsichorean pleasures. By early morning I was comparing them in my mind with my memories of the hero of Paul Auster’s early novel, Mr. Vertigo, wherein the character Walt learns how to fly. I have certainly had many so-called “flying dreams” throughout my life, which with simply grace and will-power I can remain vertically in the air for very long periods of time. 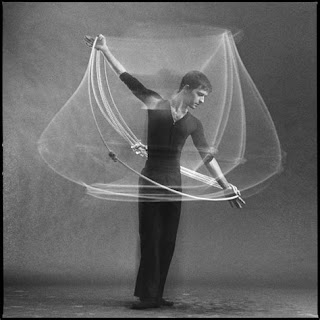 Every morning after coffee and toilet, I check Facebook, first my own messages and then those of others. This morning I suddenly saw what appeared to be a short film on the choreographer and dancer Andy de Groat. I vaguely remembered his name—although I had seen Robert Wilson’s Einstein on the Beach, choreographed by Lucinda Childs and de Groat, but otherwise I knew nothing at all about him and his career. If I try to write on dance as often as I can, I admit I am no dance critic or expert about the field. Literature, film, these are my specialties and wherein my major contributions lie, along with a long history of art through my husband, art curator Howard N. Fox.

I rarely click on such Facebook offerings, except to hear jazz and singers from the past. But something this morning called out to me. As I have long maintained synchroncicity and coincidence have been major elements of my life. But this hour and one-half tribute to de Groat, who I quickly perceived, had died on January 1 in France, at the same age I was on that date, suddenly took me down a rabbit hole that I might never before imagined.
The first figure who appeared, I gradually recognized was my dear friend from Cedar Rapids, near my hometown of Marion, Iowa, Mel Andringa. What was he doing, directing an event for this dancer, obviously a memorial in honor of de Groat, held at Manhattan’s Judson Church on September 17th?
I now presume it harkens back to one de Groat’s early collaborations with Wilson, Deafman Glance (1970), first presented at the University of Iowa where Andringa was then a student/artist/performer. I later brought Andringa and his companion F. John Herbert to perform at Temple University when I was an Assistant Professor there.
I knew he had been long involved with experimental performance and theater, but now he was discussing so many figures I knew of and whose works I had seen and read—Jerome Robbins, Robert Wilson, Merce Cunningham, Christopher Knowles, Douglas Dunn, Meredith Monk (see my review of her Atlas in this volume) and Yvonne Rainer, many of whom I also met. Other figures such as dancers from the Bird Hoffman School of Birds, Sheryl Sutton (reading a comment by dance critic Deborah Jewitt), while numerous others presented dances and videos of de Groat, including his “Waiting for Godot Fan Dance,” and his famed “Rope Dance.”
Just as importantly—and I hadn’t known this at all—de Groat, who had a romantic with Wilson, had been particularly known for his “spinning” in both his own dancing and those pieces he choreographed for Wilson and others.
As de Groat has himself written: “I think of spinning as the base for my dance. There’s something about spinning which just seems kind of present. I can’t explain it.” Although he does go on to explain it, quite specifically, as the natural movement in dance, tracing it back to several ancient cultures. 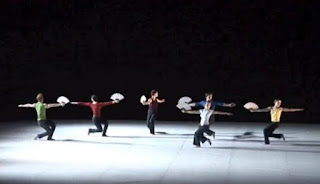 This celebration of de Groat’s life seemed to have been recorded particularly for me, and I was slightly horrified by the coincidence of it. I hadn’t even known much about de Groat, let alone that he had recently died. How could I have dreamt of his dancing before I’d truly comprehended it? And how had I so suddenly come upon this video the next morning? Perhaps I just totally open for the event to happen.

The commentary, videos, and dances were stunning, and I suddenly felt I was reliving a world that I was never quite involved in previously. In a strange way, it seemed a slightly metaphysical experience. Why had I dreamt about the spinning dance, and how had this appeared to me so suddenly the next morning?
Inexplicably, in my entire lifetime to date, I have never once experienced what is described as déjà vu, something that almost everybody has encountered in their lives. Perhaps these remarkable synchronicities are my version of that phenomena. All I can say is this series of coincidences compelled through most of that morning, and the emotional substance of them brought serious tears to my eyes. 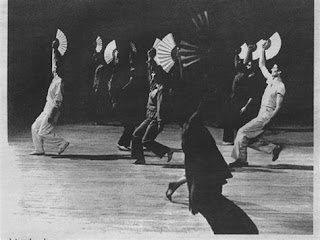 Finally, I should mention that in 2002, I received a substantial grant from the Foundation for Contemporary Arts, originally set up by John Cage, Merce Cunningham and through so many of these same artists contributions that my appreciation now knows no bounds. Looking back to that year, for example, I now perceive that the composer, now one of my favorites, David Lang received a grant alongside me with Robert Ashley and so many others. I never visited the Hudson Church Dance company, but I remember how furious I was with my beloved friend David Antin when, in one of his talks, he mocked their activities to a class of students at CalArts. But then David was a talker, not a dancer.

Posted by Douglas Messerli at 9:38 AM