Ethan Braun, Sarah Lehrer-Graiwer (composer and librettist), Adam Linder (dance and direction) (loosely based on Bernard Marie-Koltès play In the Solitude of the Cotton Fields) The Want / the performance I saw, with Tm Gratkowski, was at Redcat (Roy and Edna Disney/Cal Arts Theater) on September 19, 2019)

The new work I saw last night at Redcat (Roy and Edna Disney/CalArts Theater) is associatively based on Bernard Marie-Koltès' play In the Solitude of the Cotton Fields about a gay-night encounter between two men during a latenight-cruising, which I saw and reviewed in 2010 at Redcat [see My Year 2011]. As I wrote then:
Of course, one might immediately (as do I) wonder why
a normal sexual encounter of two gays on the street should
result in these strange metaphors of Marxist politics,
underlined by Sadeian issues of pain and pleasure. Koltès
clearly saw sex as a battle between forces and lived with a
far greater sense of being an outsider than I, who joyfully
encountered dozens of young men in my youth in just
the manner these two do.

But even then, I realized that Marie-Koltès, a man who died of AIDS in 1989, was not simply talking about the sexual encounter, but was questioning the issues that surround those encounters concerning what sexuality is truly about, in particular the issues of the cultural and sometimes mercantile-like interchange between one individual with the other. After all, he gave his life to just such interchanges, and many others (not I) did treat it like a financial-like “deal” between two people.
For me, as a young man in New York and the Midwest, it was simply an open pleasure, but if you see it from the slightly Marxist lens from which the original playwright saw it, if often did involve, as this new production presents it, as a kind of transactional relationship, in which there was a mutual “offeree” and “offeror.” I guess I was always both and presumed my partners were equally seeking just such a mutual, if terribly temporary, relationship. 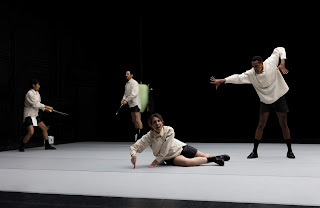 Fortunately, under Adam Linder’s wonderful balletic direction, Ethan Braun’s musical creation, and Sarah Lehrer-Graiwer’s libretto, Marie-Koltès gay investigation into such sexual transactions, has been deliciously expanded to include both heterosexual and gay interconnections, combined with wonderful dance, singing, and engaging quotes from unlikely sources such Jacques Derrida and Missy Elliott, who, in this production’s mash-up of their words never sounded better.
The real center of this work are the four major performers, Jessica Gadani, Justin F. Kennedy, Jasmine Orpilla, and Roger Sala Reyner, who move utterly fluidly between dance, brilliant operatic singing, and singspiel that makes you very much care about their numerous sexual transformations, beginning with the “Boots Are Made For Walking” introduction in which Gandani and Kennedy come together along with Orpilla and Reyner.
Yet, just as in contemporary culture, the idea of “You will get a trade-off, the tipping of scale, a shot in dark, that I am willing to risk,” quickly does become “thicker, obscuring”; as in “Face-Off,” things alter, eventually their interrelationships gradually shift, the two woman casually coming together just as the two males subtly make their sexual connections. 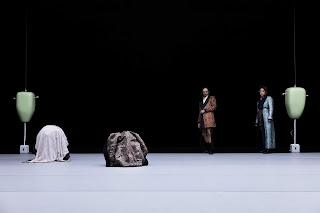 Not only are these sexual shifts beautiful and quite subtly displayed in Linder’s dance directions, particularly in the leaning of the bodies and their complex use of hand-signals, but also explored through the director’s fascination with costume, as the quartet equally transform themselves through time, from 20th-century SandM-like encounters back to late 19th-century European Jewish life (“Jewy XIV”) to, in the last scene into what I might describe as a kind of Noel Coward-like scene, where both characters, in this case a shift again of Gandani and Reyner dressed in formal home-dressing attire in which the two figures (while the other two apparently have become “ghosts”) describe what was once a passionate relationship that has now turned into an almost abstract notion of an Albee-like encounter of husband and wife:

Offeree: You want compensation for empty space between us?
Offeror: Every promise to see infers the promise to by, and there’s
a forfeit to pay: a pound of flesh, a sum of money.
Offeree. Now you’re accomplishing your designs for me.
Offeror: If you run, I will chase; if you take the wrath of
my fist, I’ll be by your side, in your unconscious
and beyond.
Offeree: I only fear unfamiliar rules.
Offeror: Even the one language we might share, that of money,
whilst representing and guaranteeing that which
exists, is only a signifier for what does not exist--
for fantasy.
Offeree: Well then what weapon?

Even Stephen Sondheim in his Follies song “Could I Leave You” could not have said it better.
Much of the early musical score of Braun’s work, is based on a sampling of Monterverdi’s Lamento della Ninfa played with a combination of violins, synths, pianos, saxophones, guitars—blasting through the sound systems of the small Redcat theater—along with a rather stunning use of light by Shahryat Nashat—which made many of these scenes quite breathtaking. This highly international cast, with roots in Los Angeles, Berlin, Spain, and elsewhere contributed to the feeling that the sexual transactions which we were experiencing on stage were truly global, something that our cultures have increasingly ignored in an era of increased nationalism and narrow-minded exclusiveness.
This opera/dance represented all of us, heterosexual, lesbian, gay, and just confused. How to create a relationship in the complex needs of “wanting” is really what this work is all about. The Want of its title is what every human being seeks, and its exploration of how to find “it,” in any possible form, is what we all have to deal with in our too human lives. It represents transactions that we never truly comprehend or can explain.

Posted by greenintegerblog at 12:05 PM