Yesterday, for the first time I listened to three songs by The Grateful Dead, “Scarlet Begonias,” “China Cat Sunflower,” and “Truckin’,” all with lyrics of Robert Hunter, who until September 25 of this year, I had never heard about. The songs were fascinating, and Jerry Garcia’s guitar riffs approached something like that of jazz musicians. Indeed, all these long years, I had been missing music that I might very much have enjoyed. But being the literary snob I was I also missed out on Queen and Elton John (both revealed to me in recent films). O well, we can’t always relate throughout our lives to absolutely everything! I loved opera of any kind. I loved the compositions of Arnold Schoenberg, John Cage, Christian Wolff and most other “experimental” composers. 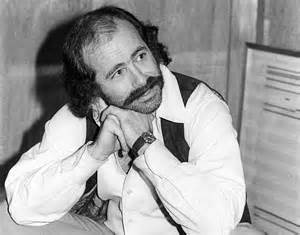 I associated pop music, unfortunately, with the television series of my time—mostly dismissible. Luckily as I have grown older I’ve learned, more than a few times, just what I was missing. Perhaps if Howard and I had a son or daughter we might have reached out to comprehend interests outside of our basically purist approach to the arts.

I still believe Hunter’s lyrics were often kind of “tutti-frutti,” meaning somewhat senseless and simply clever, but I do very like his inner-rhymes, and the way he moves forward sometimes by going backwards in his ruminations. This from “Scarlet Begonias”:

As I was walkin' 'round Grosvenor Square
Not a chill to the winter but a nip to the air
From the other direction, she was calling my eye
It could be an illusion, but I might as well try, might as well try

She had rings on her fingers and bells on her shoes
And I knew without askin' she was into the blues
She wore scarlet begonias tucked into her curls
I knew right away she was not like other girls, other girls

In the thick of the evening when the dealing got rough
She was too pat to open and too cool to bluff
As I picked up my matches and was closing the door
I had one of those flashes I'd been there before, been there before

A girl walkin’ round Grosvenor Square with scarlet begonias tucked in her hair would be, given my sexual orientation, a person I might not even notice, let alone experience a kind of déjà vu experience about. But then Hunter had long been an experimenter, sometimes without his knowledge through a covert CIA research project in drugs such as LSD, psilocybin and mescaline, and evidently grew to love them.
But he was certainly a poet in hiding in the internal off-rhyming of “matches” and “flashes” and in the novel metaphor of “calling my eye”; and anyone who can find a reason to rhyme “shoes” and “blues” or “rough” and “bluff” is all right with me. Even Sondheim with his eternally clever rhyming doesn’t quite reach there.
The quirky lyrics of his “Truckin’” confirm a kind of pop poetic imagination:

Truckin' got my chips cashed in
Keep truckin' like the doodah man
Together, more or less in line
Just keep truckin' on

Arrows of neon and flashing marquees out on Main Street
Chicago, New York, Detroit and its all the same street
Your typical city involved in a typical daydream
Hang it up and see what tomorrow brings

I’ve never been interesting much in trucks either, but here the idea of driving a truck down the long Main Street of US cities with their “Arrows of neon and flashing marquees,” “Chicago, New York, Detroit,” and later Houston and New Orleans—becoming a kind of metaphor for the “doodah man,” the standard word for back-up singer of music groups who against all odds, in this case, keeps moving on—is a quite wonderful tale of an individual who hangs up his or her dreams to explore “typical cities involved in typical daydreams.” I don’t think you might be able to describe the American Dream any better than this. The point is to just keep moving, as our settlers did, trying to find a new paradise anywhere they might. Hunter perhaps captures the “soft machine” of US mobility (and sometimes flexibility) better than almost anyone in this song. Where are we going, nowhere, just “out-there” he seems to be arguing.
In “Uncle John’s Band,” Hunter seems to enticing us join another “band,” a chorus of voices that might take us away from “the hardest days,” while yet warning us that whenever we think we are on “Easy Street, there is danger at your door.” In short, the poet/songwriter demands we go to a more difficult world or acoustical experience, that of “Uncle John’s Band,” a world that with his repeated cry of “Wo, oh,” suggests the call of death.
Here, unlike almost any pop lyrics, the writer asks the listener to “to think it through with him,” and even to respond, to share his own views. What do you think about death, he seems to be asking. Are you ready to join it or deny it. “Come with me, or go alone, he's come to take his children home,” almost echoes so many black spirituals of the 19th century and Peter Gabriel’s lyrics for The Righteous Brothers: "Son’, he said, ‘grab your things, I've come to take you home’."

Well the first days are the hardest days, don't you worry any more,
'Cause when life looks like Easy Street, there is danger at your door.
Think this through with me, let me know your mind,
Wo, oh, what I want to know, is are you kind?

Goddamn, well I declare, have you seen the like?
Their wall are built of cannonballs, their motto is "Don't tread on me".
Come hear Uncle John'n Band playing to the tide,
Come with me, or go alone, he's come to take his children home.

It's the same story the crow told me; it's the only one he knows.
Like the morning sun you come and like the wind you go.
Ain't no time to hate, barely time to wait,
Wo, oh, what I want to know, where does the time go? 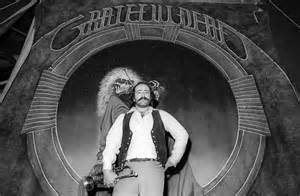 Why, you might ask did I suddenly take interest in a poet/lyricist I had never previously heard of until his death? I must admit it became personal when I suddenly encountered an interview Steve Silberman had done with Hunter in Poetry Flash years earlier in 1992. Asked about Hunter’s evident interest in the “Language” poets, Hunter responded:

“That’s a process of vacuuming that stuff out, by having other models. One of the things that has cleaned my act up was falling in love with the Language poets.”
Silberman asks him “How did that happen?
Hunter answers: “It was as simple as buying Doug Messerli's The Language Poets [“Language” Poetries: An Anthology, published by New Directions in 1987]. I opened it in the store and said, "Whoo!--This is like the stuff I used to write 25 years ago at the depths of my madness." Then I got Ron Silliman's book, In the American Tree [a book I distributed] and read all the way through that. This was speaking directly to me. I got interested in the individual poets, and started building a collection, and then I invited Lyn Hejinian and Carla Harriman [Harryman] to read with me. The freedom that Language poetry opened up helped to dust away the Victorian cobwebs from my own work.”
I was startled to read this, from an interview which I’d never encountered before. And suddenly I realized that I, not in person, but in spirit at least, met Robert Hunter before.

Posted by greenintegerblog at 3:06 PM