Douglas Messerli | "Surrendering Both Bow and Arrow" (on The Heal, the Getty Villa performance of Sophocles' Philoctetes)

surrendering both bow and arrow
by Douglas Messerli

Aaron Posner (writer and director, inspired by a play by Sophocles) The Heal / presented by The Getty Villa / the performance I attended with Pablo Capra was on Wednesday, September 4, 2019

As we left the wonderful Getty Villa the other night, where I had just seen The Heal, Aaron Posner’s new version of Sophocles’ drama Philoctetes, my theater-going companion Pablo Capra asked me what I thought about the production. I have long admired the Getty Villa’s annual Greek theater presentations and didn’t want to speak openly about it in front of others who had just attended and—given the sense of audience reaction and seeming approval—say anything that might squelch their enjoyment of the evening. But when we finally reached our car, I blurted out: “I think it was rather silly.” Pablo suggested that there was a play within the theatrical gestures which was far more interesting than the adaption would allow, and I agreed. 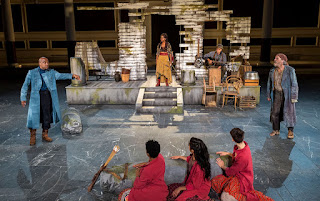 Not that the original Philoctetes is an easy play to appreciate and is a play that is seldom performed accordingly. This work in which the hero Odysseus stops by an arid island where he has previously dumped his former compatriot Philoctetes because of that man’s smelling, rotting, and outwardly painfully suffering of his heel (not so very much unlike the source of Achilles’ destruction). This time the journeyer Odysseus has in hand Achilles’ moral son Neoptolemus, whom he attempts to convince must lie in order to steal Philoctetes’ powerful, ever on-target, bow which Hercules has left him as an heirloom for helping create his funeral pyre.
If all of this might be a bit complex for modern audiences, never mind, Posner and his chorus of three muses (Eunice Bae, Emma Lou Hébert and Jaquita Ta’le) will be on hand, a bit like the backup singers for a great performer like Diana Ross, to tortuously tell you the history that you’re missing, along with a completely extraneous series of folk-guitar-like songs, composed by Cliff Eberhardt. By this point, early on in this drama, we quite quickly realize that we’ve fallen off the cliff of anything that Sophocles might have wished to express in his original work.
I’ve never much minded most deconstructions or reinterpretations of ancient theater. And sometimes they are necessary to help us comprehend just how powerful these works might have been for the more informed original audiences, who well knew the myths they were based upon. And there was something powerful about transforming the male Neoptolemus into a female daughter of Achilles, Niaptoloma (Katie Rogers, quite beautifully attired by costume designer Sarah Cubbage), which helped this play become a kind of feminist work that spoke to our time. But there was something debilitating as well about this adaptation’s need to treat us like historical idiots, at times even mocking the audience’s possible lack of knowledge of the original Greek characters.
In a sense, this production, co-produced by Washington, D.C.’s acclaimed Round House Theatre, seemed more like a version of “Cliff’s Notes” than an actual presentation of Sophocles’ original.
Rogers did her very best to refocus the play on the original themes of betrayal, lying, and simple male empowering (all represented by Odysseus [Lester Purry] in a way that might remind one of our current leader—just like Trump, a slightly slimy self-justifying prognosticator) drama on the back of a moral individual, forced by the political conditions to attempt to betray a Philoctetes whom, when she finally meets him, turns out—despite the disgusting stench of his foot and his constant bemoaning—is an honest man seeking a way back into society after having illegally treading on sacred ground, the cause of the snake-bit that is constantly torturing him.
The very fact that he has survived after several years in this arid world speaks volumes about his own heroism. Is it any wonder that he perceives the lovely Niaptolama as a vision who promises him a return to normalcy and a possible cure? Who wouldn’t temporarily loan his magical bow to such a being?
But, obviously, once he has rendered his powerful force to this young woman/man, he recognizes he might have given over his very life. It is a powerful moment, lost, unfortunately, in this production. When you give up everything you have, to where can you return? He has no magic except in his murderous weapon, and now it is pointing to him.
Yet given Niaptolama’s moral sense of responsibility, she perceives that he must be returned to society as well and turns the magical arrow at both Odysseus and the pained Philoctetes (Eric Hissom), demanding the truth from both of them, revealing Odysseus’ lies and the suffering man’s admission that he had indeed sinned by entering sacred territory.
I would interpret that sacred territory as representing a world of knowledge and sense of self-empowerment that was not permitted within the society. And in even this skeleton of a play, we recognize that Philoctetes cannot ever be cured until he admits that he has done so. Both men must admit how they have used their male egos to abuse others before being “healed.” But the title keeps referring us back to Achilles, unfortunately, who was a hero dipped into safety except for that one spot. Yet this “healing” is not at all about “the heal,” but about a social contract with and about those around them, which both men have broken. The title is most unfortunate given the fact that Niaptolama / Neoptolemus’ father died for nothing of his own doing.
These men are both intruders upon the world order, and their sins, as the now Amazon-like daughter insists, need to be confessed. Yet this play version never truly confronts that, but winks, blinks, and pretends that somehow their sins might be easily absolved, as the chorus pretends that this is not truly a serious drama.
Yesterday, I turned to the Los Angeles Times review by Charles McNulty, to see its headline: “Greek tragedy turns goofy.”
Sad, particularly since this ancient story says so much about moral scruples and a change possible for society. Something we now need to hear about more than ever.


Posted by greenintegerblog at 12:51 PM