a confusion of dichotomies

Stanisław Ignacy Witkiewicz (Witkacy) The Two-Headed Calf / a production of CalArts Center for New Performance and STUDIO teargaleria / performed at Redcat (Roy and Edna Disney/CalArts Theater) in Los Angeles, the performance I attended was on October 19, 2019

First performed in 1921, The Two-Headed Calf, by the noted Polish writer Stanisław Ignacy Witkiewicz (known to Poles as Witkacy), is a bizarre family drama, which originally shuffled between Papua-New Guinea and Australia as the play’s young neurotic hero, Karmazyniello,  after the suicide of his beloved fiancée, attempts to determine who and what he is and how he was born into the mad family in which he exists.
As in other such avant-garde productions of the time, which were later major influences on everyone from Artaud to Ionesco and Beckett, there is little coherent plot and no clear trajectory for where the play is moving. All we can truly be sure of is that the climate—an important factor here, as it may be in all of our futures—heats up the body, inner and outer, of the protagonist until he is confused about a great many things, as is the audience, perhaps a perfect metaphor for the way most of feel much of the time today. 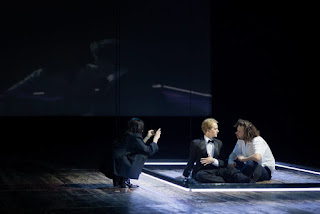 This spectacular new production by Warsaw’s Teatr Studio, headed by Natalia Korczakowska, transforms the location to Sydney and the California desert, ending in Death Valley. The character is now named Patricianello (performed through two hooded personas, representing obviously the two-headed calf, by Rett Keeter and Robert Wasieciz), the name suggesting both his patriarchally-controlled world and the Italian ribald jester, clown, fool and wit that defines the puppet Punchinello.
This 2019 version of Witkacy’s major play asks many of the same unanswerable questions of the original but in ways that seem more contemporary. Is our young hero in love with his father, suggesting an almost pedophilic attachment, with his sister, his brother, or is the entire family—since three of the major male family figures at one point appear in full white gowns—transgender?
Except for the highly languid Lady Leocladia Clay (Ewa Blaszczyk), most of the other figures, particularly the males, seem throughout to literally bounce off one another, in a remarkably athletic representation of both their loves and hates for the people with whom they live. 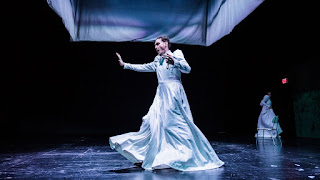 There is also a Queen (Symone Holmes) and a beautiful blonde-haired man, which represents the best of the Parvis family, and the always suffering boy, who seems unable to determine whom he most loves or even what his sexuality might be or become. Witkacy suggests that perhaps he loves himself far more than anyone else.
Scenic designer Salman Beydoun, along with the costume designer Marek Adamski and lighting designer Marek Adamski stir up this strange pot-au-feu with amazing visual transformations, accompanied with music by Beethoven and original compositions by Chris Kallmyer.
In short, in this engaging production there is a lot for the ear and the eye, while the play fevers up the imagination in the viewer’s attempt to make coherent meaning of what is going on. Yet that is Witkiewicz’s real point: it is impossible to truly make linear sense of the psyche of any individual, let alone to try to explain the devastation we all suffer, to some extent, through family life. Meaning, “coming through” to whatever we mean by the “real” self, is nearly impossible, and it is only by facing the always heated-up landscape of pasts that we can comfortably move into relative stable future, perhaps simply to pass on our confusions to the next generations. 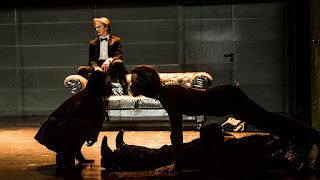 The two-headed calf is always an abomination, even if it might be seen as a kind of wonder, for yes cannot mean yes, and no cannot mean no (for the opposite of which, at one point, a character argues) if you’ve got two minds in one. You are always of two minds, as anyone who carefully thinks will be for their entire lives. And that is the true dilemma of our handsome and plainer looking Patricianello, trapped in the confusion of dichotomies.

Posted by greenintegerblog at 8:46 AM