dreaming through music
by Douglas Messerli

Magos Herrera and Brooklyn Rider / I attended the performance at The Wallis Annenberg Center’s Bram Goldsmith Theater, with Thérèse Bachand, on Thursday, October 10, 2019

Let me begin this review by admitting that I do not have language skills in either Spanish or Portuguese. It is important to say this when you are reviewing a concert when almost all the songs are in these languages.
Last night at the Wallis’ Bram Goldsmith Theater, apparently, many of the Beverly Hills audience members felt that, given that language gap, they had to get up and politely exit the theater, while my evening companion, Bachand and I remained in our seats to soak up the lovely music of the beautiful and jazz-inspired Brooklyn Rider quintet—Johnny Grandelsman (violin), Colin Jacobsen (violin), Nicholas Cords (Viola), Michael Nicholas (cello), with Mathias Kunzli playing a wide range of percussion instruments—accompanying the wonderful vocal renderings of Magos Herrera. 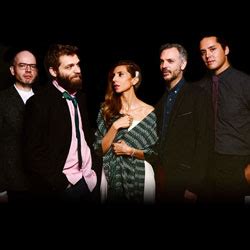 The songs she sang and the quintet played were from composers from Mexico, South America and Spain, including Chile’s Violeta Parra, Argentina’s Gustavo “Cuchi” Leguizamón and José Castilla, and Carlos Aguirre, Mexico’s Álvaro Carrillo and Magos Herrera’s own compositions—one in collaboration with Felipe Pérez and another with Nicaraguan composer Fabio Gouvea, along with a popular Mexican song, a Spanish composition based on the work of Federico García Lorca by Vicente Amigo, and several songs by the most brilliant Brazilian composers of the 20th century, whose works I have heard on my two trips to that country, Gilberto Gil, Caetano Veloso, and João Gilberto. Although I might have liked to have minimal translations provided, I think my theater companion and I truly understood their undercurrents of love and betrayal.
But what the audience who remained truly understood is in the Octavio Paz quote, which prefaced this performance:

Dream of the sun dreaming its world. Sing till the song throws
out root, trunk, branches, birds, stars. Sing until the dream
engenders the spring at at which you may drink and recognize
yourself and recover.

Based on the group's Sony Masterworks recording from this year, Dreamers, this important work refers not just to the “dreamers,” not just born in the US in fear of deportation, but on all those who might dream to be free of dictatorial governments and able to move across borders with the ease of these lovely songs. If I didn’t comprehend many of the words, I knew what they meant through Herrera’s lovely phrasings: they were all a cry to love, care for one another, to join together with a joy in just being together.
The darker tones provided by the quintet worked brilliantly with Herrera’s soprano voice to provide us with a language that spoke of the stupidity of any walls between people. This was a music that communicates its intensity of loving, of caring, of passion that doesn’t even need a translator to communicate it to you. And I feel so sorry for those who felt excluded and left because of that. I’d only cry out: open your ears and you will hear an ocean of comprehension. 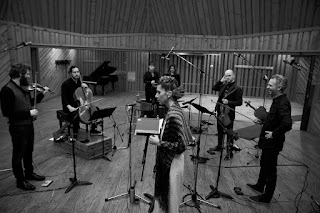 Herrera—dressed in a gorgeous white gown, covered with a caftan with stunningly sashed green rows of ribbons, and white shell-like earrings—sings with a Latin-based sopranto voice (and what a voice!) of a world open to the borders of linguistic differences. Although I might have desired to understand every word she phrased, the point was aptly made: music transforms us simply by its remarkable rhythms, its pulses, its amazing ability to pull us in by our ears and hearts.

Those of us who remained were treated to an evening so memorable that even I as a critic,who often does prefer to stand up for the now standard standing ovation, stood willingly up to applaud this amazing musical demonstration of borders completely collapsed. I could have almost cared less whether or not I understood what was being sung: it was simply marvelous to hear it.

Posted by greenintegerblog at 10:58 AM