gems of abstraction
by Douglas Messerli

George Balanchine Jewels, performed by the Mariinsky Ballet / Glorya Kafman Dance at the Music Center, Dorothy Chandler Pavilion / the performance I attended with Diana Bing Daves McLaughlin was on October 24, 2019

Last night I attended a performance in Los Angeles’ Dorothy Chandler Pavilion of George Balanchine’s iconic, three-part ballet, Jewels, performed by the renowned St. Petersburg, Russian company Mariinsky Ballet along with their own orchestra conducted by the august Alexey Repnikov. This is the same company, if you recall, which gave us Ggalina Ulanova, Alexei Yermolayev, Marina Semenov, Vakhtang Chabukiani, along with, much later, Irina Kolpakova, Natalia Makarova, Alla Osipenko, Irina Gensler, Alla Sizova, Rudolf Nureyev, Mikhail Baryshnikov, and numerous others.
Created in 1967 by George Balanchine for the New York City Ballet—who himself began his career in St. Petersburg and worked at the Mariinsky until emigrating in 1924—Jewels is one of Balanchine’s most popular works, with good reason.
Instead of taking the traditional route of narrative balletic logic, this trilogy, using all of the devices of traditional dance, chose to abstract those movements, along with a somewhat traditional use of great composers’ music, in order to focus on the incredible en pointe movements of the ballerinas, and the remarkable leaps and spins of the male members of the ensemble, not that the female members don’t spin themselves into near toy-like tops throughout. Indeed, in all three of these gem-like dances, the choreographer focuses on the athletic abilities of his corps rather than hiding it behind the romantic stories so much of traditional ballet has relied upon.
If it’s a simple device to break these rather un-related dances through three lovely “gems,” emeralds, rubies, and diamonds, Balanchine subverted into his terpsichorean text another connecting link, the three major sources of his own dancing experiences. 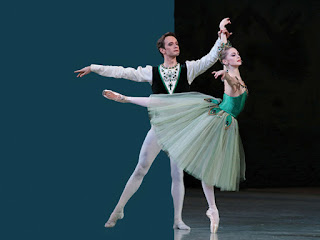 Emeralds, the first of the three, refers through its musical scores of Gabriel Fauré’s Pelléas et Mélisande and Shylock, to the choreographer’s early experiences with French dance, where, in this case, the “emeralds” dance in light green longer tutus, spinning through the forests, with principals Daria Ionova and Maxim Zyuzin (in the evening in which I saw this), creating such lovely pas de deuxs that you might almost cry for their balletic balance. And then, of course, there are so many “emeralds” spinning nearly out of control, their tutus flying, that you almost begin to perceive the preciousness of the glimmer of the green jewels they represent.
I loved this piece, but it was in Rubies that, for me, things began to come alive. All in red and white, dancing to Igor Stravinksy’s Capriccio for Piano and Orchestra, the stage stuttered and stirred itself alive with the struts and playful, jazz-like stretches of dancers Kimin Kim and Ekateriana Chebykina. 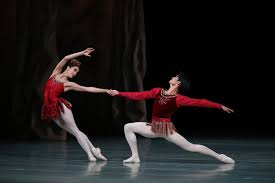 Here, in a far more Americanized version of life, the brilliant dancers Kim and Cheykina seemed more equally matched than in the traditional holding and lifting positions of the males in relationship to the females that you usually think of in traditional ballet. Drawing on Balanchine’s Russian roots, you oddly enough felt that perhaps the Socialist-Communist notions of equality, combined with the references to his US experiences, broke through the puffery of the French dance tradition. Kim, in particular is a male dancer to watch, with incredibly air-deifying leaps and spins into space that, if not quite matching those of Nureyev or the sometimes quirky positions of the great Baryshnikov, made you realize he is a certainly a challenger to that tradition.
I might have watched the red nuggets of that piece all night; yet, it was the shortest, perhaps simply because of the technical impossibilities put upon these wonderful dancers, and, in some senses, realizing the impossibility of their playful, yet incredible movements—skipping, jumping, spinning, leaping, all in relationship to one another—you had to realize that their legs and breath simply couldn’t hold on forever.
The last great piece brought back the Mariinsky’s own older traditions in a grand, almost wedding-like gathering of the full cast in Diamonds, accompanied by, who else could it be, that most Romantic of all Russians, Peter Ilyitch Tchaikovsky, with his Symphony No. 3 in D Major, representing Balanchine’s personal relationship with this very company. 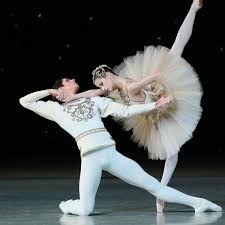 Many reviewers have described Alina Somova and Vladimir Shklyavo’s performance as one of the most amazing performances of the season. But despite that remarkable duo, to me it appears that this is a corps de ballet performance, as dancers, gradually accumulating—who, arriving out of the wings, so to speak—weave and turn in and outside of one another as if this were a formal dance being performed in court. It is a lovely thing to behold, and we realize that this is the final gem in the ring that Balanchine has created for us.

This might almost be something out of the famed company’s production of Leonid Lavrovsky’s Romeo and Juliet. And how could one not love the glorious female and male meetings of these so incredible performers. Even when a single dancer falls a bit out of sync with the rest of the perfectly synchronized others, we easily forgive him; after all this is so much better than the Rockettes, who just kick and kick. These dancers give their entire hearts and bodies to the performance and make for such lovely scenes that it appears to be out of some kind of fantasy of what dance can become.
Diamonds maybe one of the best dances ever performed; it is the final jewel in Balanchine’s great work. Yet I still wanted to go back to that over-enthusiasm of Rubies. Balanchine evidently said “I’m Georgian. I love beauty!” So I might reply, “I’m American (actually of Swiss heritage), let the jazz of US-like rhythms provided by the Russian Stravinsky’s wild strums go forward without the resolve of the other two pieces. Let Kim dance his heart out.


Posted by greenintegerblog at 1:09 PM