losing your mind
by Douglas Messerli


Craig Lucas (book), Adam Guettel (lyrics and music) The Light in the Piazza / the performance I saw with Howard N. Fox was at LAOpera’s production at the Dorothy Chandler Pavilion on Sunday, October 13, 2019


I don’t like reviews that begin with the critic’s statements of his or her own ability to speak out about the work, but I have to admit that I begin this review with severe doubts my own powers to write intelligently about it. 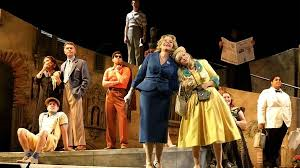 Adam Guettel’s 2005 Broadway (via Lincoln Center) musical is one of the most stunningly beautifully scored works of theater—or even of contemporary opera; and it won several Tony Awards for its magical invocation of a visit of an US mother and daughter’s to Italy, the mother in search of the love she has lost while the daughter discovers new love in Florence in the form of a beautiful young Italian boy, Fabrizio (Rob Houchen), when she temporarily loses her hat—a metaphor clearly for the mind that lies beneath it.


And it is no accident that she has lost her mind in the incident, since we gradually discover in the work that this young girl, Clara Johnson (Disney star Dove Cameron) is what her mother and father perceive is mentally-challenged having been kicked in the head by a small Shetland pony in her childhood. 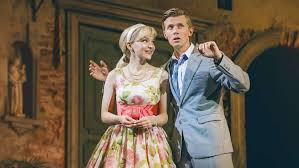 The girl, now 26 years of age, does seem far younger than her years and is given to occasional flights of excitement and over-exhilarated behavior that might lead a casual observer to wonder if she has a deep emotional instability.


Yet, for all that—and this is a problem in all the versions of this work which I have experienced, the book by Elizabeth Spencer, the movie directed by Guy Green (and the weakest of these versions), and now the musical, all are rather vague about the actual mental problems of the lovely young Clara. If perhaps she seems overly naïve, falling immediately in love with Fabrizio, so does he seem equally naïve and just as innocent—with only the excuse that he is still almost a teenager, having just turned 20.


Clara, however, quickly learns several words of Italian, and quickly is able to speak up against her over-protective mother, Margaret (the great singer Renée Fleming); and, ultimately, when she and Fabrizio are about to be married, quite quickly learns the Roman Catholic liturgy, including several Latin phrases. For me, this has always been a problem with this work. If she is truly medically impaired, so might we all be. 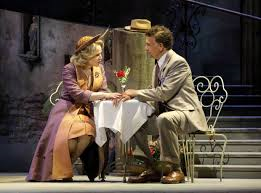 What is important in this work—with its absolutely beautiful songs and musical arpeggios, and absolutely stunning if quite simple set by Robert Jones along with glorious lighting by Mark Henderson—is that the elders, who almost all have failed in their adventures with love are desperate to protect their youngest from the same pains they have suffered.


At the heart of this musical are the failures of the adult relationships: Margaret’s long empty marriage to her business-hungry husband Roy (Malcolm Sinclair), the unfaithfulness of Fabrizio’s father Signor Naccarelli (Brian Stokes Mitchell)—which at one point is described as recognized by his more faithful and forgiving wife (Marie McLaughlin)—and Fabrizio’s far-more disillusioned sibling Giuseppe (Liam Tamme) and his wife Franca (Celinde Schoenmaker), who almost brings poor Clara to tears in her attempt to convince her, in the crucial “The Joy You Feel,” which suggests that any marriage to Fabrizio will lead her to sorrow.


The love of the two innocents is just that: beautifully charming. One might suggest that they are both not in touch with the real world, but in another sense they are the only ones who do know what love might be, and the beauty in which they sing about their love represents some of the highest moments of this opera-musical. 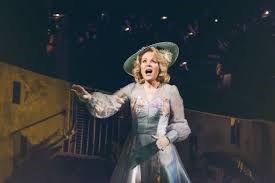 And yes, it is truly a kind of operatic piece, in which, often the lyrics move to complete abstraction, words like “piazza” having to be desperately elided in the work’s major song in Act Two, Scene 3, sung by an very excited (back in Florence after a desperate attempt to take her away from Fabrizio to Rome by her mother), “The Light in the Piazza” and the gushing expression of love by both Clara and Fabrizio at the end of Act One, “Say It Tomorrow.”


It is not accidental that in my first round of my musical theater favorites in My Year 2018, I could not choose a song from this wonderful musical: none of them are songs you can take home to your favorite local stage. They need operatic productions, with a complete orchestra with harp, major percussion instruments, violins, violas, celli, bass, piano, oboe, etc., and great conductor to oversee this orchestral combination, in this case by the more than competent Kimberly Grigsby.


So why mightn’t I just say I loved this work and cried and through it all; all of which I totally did?


One of the greatest singers of the world was starring in this production, Renée Fleming, the central figure of this production, a woman whom I adore from her various operatic performances. But here, I felt, she was toning down her grand voice for several reasons. She clearly did not want to out-perform the younger singers, particularly her stage daughter, Clara. But to give Cameron her due, she did quite remarkably with her fragile soprano voice in representing her own blossoming coming out—and in this case that really is what it is. In his role as Fabrizio, Houchen literally came alive as one of the most remarkable young singers of today; I would immediately advise him to get out of Les Misérables-like roles and move into better musicals or even operas wherever and whenever they might appear. He is so talented that he might do remarkable things in many a Broadway revival of the great musicals of Guettel’s predecessors, from his mother Mary Rodgers to his grandfather, Richard. I think he might have great in Sondheim’s Sweeny Todd as the young sailor in love with Johanna. In some senses he is the real charm of this Piazza production.


Celinde Schoenmaker was wonderful as the unhappy wife of the also talented Giuseppe. Her evil statement of unhappiness was a true pleasure of this production.


But where was the great Fleming, fussing constantly over the possible failures of her stigmatized daughter? Well, of course, she was stunningly beautiful in the first act song of sorrow about when you first realize that love has broken down, “Dividing Day,” perhaps a song I might have included, when I think back, in the 2018 collection of favorites. And she was quite charming, surely, in her attempt to change the mind of Signor Naccarelli when he becomes outraged after perceiving the 6-year difference between his son and Clara’s birth, in the lovely seeking-out-solution song, “Let’s Walk,” a hard work to perform on a stage based around a circle, but nonetheless beautifully conceived.


Yet we’d come to hear that glorious voice, this time even amplified by microphone. Only in her absolutely amazing last song, “Fable,” did the renowned singer finally shine forth. Here, in expressing all of her anger for her denial and later change of mind to allow her young daughter’s marriage, she finally becomes a fierce force right out of Wagner, allowing that all of her and her husband’s, as well as the Naccarelli’s family’s, notions, of marriage are nothing of importance. Yes, like Stephen Sondheim has often argued, love is a “fable,” but there is no possibility to love if you can’t ignore that reality, and perceive it as a myth completely gone wrong. It is a brilliant “Try to Remember” moment when you have to give up your own notions of your youth and to imagine what your children might find in one another, as well a plea for forgiveness, a demand for the correction of time and previous failures, a hope for a future in which you yourself cannot be embraced. Finally the great diva was allowed to come alive. It was worth a visit to this wonderful musical-opera just for that moment.