Douglas Messerli | "One of Us" (on Shyam Bhatt's Treya's Last Dance)

one of us
by Douglas Messerli

Shyam Bhatt Treya’s Last Dance / the performance I saw at The Hudson Guild Theatre was on Wednesday, October 2, 2019

First performed in Los Angeles’ 2015 Fringe Festival, traveling after to New York and London, Shyam Bhatt’s one-woman play Treya’s Last Dance recently returned, in a slightly revised form and directed by Poonam Basu, to Los Angeles, where I saw it at the Hudson Guild Theatre the other evening.
Bhatt, playing a British-Indian woman (her own background, although she insists that the work is not autobiographical) represents a literal whirlwind of beings, as she tells stories of Treya’s family, centering particularly her beloved gay brother who has evidently died of suicide, cousins, her supportive mother and father, friends of the family, and even a homophobic Afro-Caribbean preacher.

So fast-paced and taut is her mimicry of these many voices that a US audience may have difficulties in discerning some of her sentences given her British-Indian intonations. If nothing else it means opening up the ears to take in all the intricacies of her numerous stories. 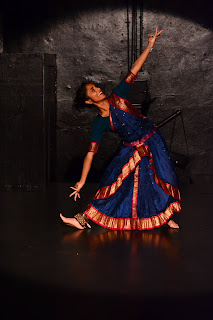 Yet, for all the discussions of Treya’s family life, the play is also a long treatise—and I don’t mean this academically—on her own sexual activities and possibilities, and the difficulty of second-generation migrants. Concerning the latter she argues that while it is understandable that the original migrant family members might desire to be surrounded by their own kind, fearing the radical changes in culture they have just entered, their children, born in Britain in this case, need, sometimes painfully to pull away from their parents, friends, and familial values. How does one do that with love and grace? It’s a dance of a different kind, the metaphor that bookends the expanding vision of her world.
Clearly, Treya has previously experimented, quite casually, with sex, yet much of this work is centered upon a wish to please her mother by attempting to discover a man she might marry. Perhaps attending a speed-dating event with the talkative Treya is not a very good idea since the males, after their original question, are thereafter pretty much silenced.
Yet her potential dates all seem so inane and unoriginal that we hardly feel sorry for the males she confuses and perhaps repels. Treya is after all a beautiful and smart woman who’s willing to come back with honest, open-ended discussions which should charm them, as it does the audience, but apparently pokes and prods these dense male egos, forcing them to disappear after her intense answers to their mostly stupid questions. She is a charmer for anyone who does not take themselves as seriously as these clearly incompetent would-be partners.
Bhatt begins her show with Treya in full Indian garb attempting to dance a traditional Indian work, but after her night(s) of speed dating, she comes suddenly to a new realization, even if we don’t quite know where that might lead her, psychologically and sexually. What we do realize is that she will not subdue her logorrheic personality to simply please some stranger, male or female.
And in that realization, she has become much stronger, willing to put on only traditional ankle bracelets to perform a different kind of dance which encompasses both the “petal-like” complexity of the East with the restrained and simple elegance of the West. Finally Treya has brought together her multiple identities and fused them into the woman she has already revealed to the audience. 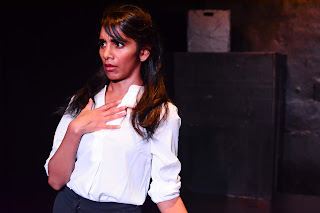 If her first dance, awkwardly performed with fits and starts, was not a perfect rendition of who she actually is, we can recognize her last dance as statement of her newly discovered self-identity, one which she has been displaying to us all along. This play, in the end, is about not only the difficulties faced by migrant families, but the realities contemporary societies place upon them with regard to the LBGT community and feminism.
As I said, we can never know where her life-journey will take her. But we do know, most surely, that she is a dancer in life with all the beauty and grace she has sought out in her search to comprehend the various pulls she has experienced throughout her youth. Like most of us, actually, she is a blend of cultures, despite some current leaders’ attempts to reclaim an imagined purity of thought and blood. In the end we perceive that Bhatt and her marvelous Treya is one of us.

Posted by Douglas Messerli at 7:49 AM