a sacred domain
by Douglas Messerli

On the death of  the great pianist Paul Badura-Skoda

On September 25th, 2019, the great pianist Paul Badura-Skoda died in Vienna at the age of 91. Badura-Skoda was recognized by many as one of the greatest of classical interpreters, yet his repertoire included a wide range of composers, including as The New York Times music critic Anthony Tommasini noted: Mozart, Beethoven, Schubert, Chopin, Scribin, Rimsky-Korsakov, Hindemith, and the Swiss composer Frank Martin.
Badura-Skoda began his career as a pianist whose musical artistry was unquestioned, yet in his early 20s, after hearing the Austrian harpsichordist and fortepianist Isolde Ahlgrimm, he began to question his notions of the piano as being the dominant interpreter of classical musicians. 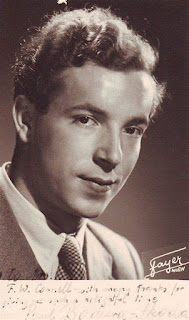 That transformative encounter led him not only to acquire dozens of fortepianos as well as other 19th century instruments, but to explore the sonics of those keyboard-based tools and to rethink his musical interpretations of the over 50 recordings he had made by the age of 30.

His musical gifts were widely appreciated by audiences throughout the world, yet particularly in his later years, according to Tommasini, seemed “to lack sparkle and clarity” of his earlier recordings—but then similar complaints were made about Glenn Gould’s somewhat mannered performances.
Basically, Badura Skoda was widely admired for his playing as well as he critical works, written with his wife Eva, a musical historian and fellow performer, such as Interpreting Mozart at the Keyboard. 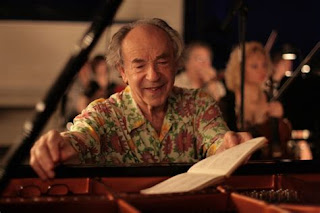 I think I never met Badura-Skoda and his wife, although I may have at a party of the Music Department at the University of Wisconsin-Madison which I attended as a young student (at the age of 18), which apparently resulted in a great amount of gossip, so I perceive now at the age of 72, since the department’s chorale director Vance George, with whom I was having, at that moment, sexual encounters, invited me to attend. As a student who worked in the Admissions Department and even in my sophomore year engaged to numerous professors to help make beginning students feel comfortable, I saw no problems in my attendance; yet a couple of years ago, visiting Vance in San Francisco, where he had been now long been the director of the San Francisco Symphony Chorus—winning Grammy Awards for Best Performance of a choral work Orff’s Carmina Burana, 1992 and Brahms Ein Deutsches Requiem, 1995, Best Classical Album of the year Stravinsky’s Perséphone, 2000 and Mahler’s Symphony No. 3, 2004, with TV and film credits including an Emmy for Sweeney Todd, 2002 and soundtracks for Amadeus, The Unbearable Lightness of Being, and Godfather III—he hinted that he regretted that invite. I truly don’t even remember it (I was so very innocent, even then) but I now gather that taking a student to such an august event might certainly have resulted in many a wagged tongue. 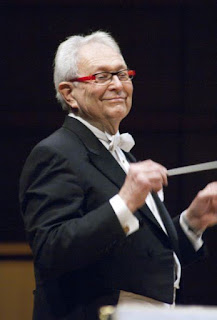 I certainly had heard some of Badura-Skoda’s recordings, however, and just this moment listened to his version of Beethoven’s  Piano Concerto No. 4, where he literally takes the piano on a trip through lovely thrilling trills and almost waterfall-like trips up and down the scale. I wish I’d recall meeting him and his wife and have been to discuss his interpretations.
Now dead, they can’t even imagine how much their living meant to me. After having spent an rather difficult and exhausting year in New York, leaving after my then-lover Richard, a curator at the American Museum of Natural History—I might now guess that curators are a big thing in my life—literally dumped me one morning, telling me that he had previously made a commitment to another man, I, more pained that I now realize, took to what must have been the last New York City phone booth, just a few weeks before the now famous Stonewall protest, to call my parents in order to help me pay for my trip back to their Iowa home. I didn’t want to return, but I knew I needed to. And after a few days, I was ready to get back to my university studies at Madison.
I arrived there without housing, and still hurting from my NYC days. But I was certainly ready  to my student life. I don’t at recall how I hooked up with Vance again: in those days we knew how to use telephones. Nonetheless he amazingly invited me to come to the house in which then ensconced, caring for a property owned by the Badura-Skodas who had traveled to Europe, probably Vienna, for the summer. Why Vance, who had his own Madison apartment was staying there, I didn’t ask, and why our mutual friend Pat, was also there I was silent about. I loved them both.
To me, it was just a wonderful and beautiful moment of comfort, a kind of redemption for my naughty days in New York. Yet, of course, the three of us shared a big bed, although no longer with sex, just hugs and kisses. It’s hard to imagine all that simple and silly sexual dalliance these days. It was just a terrible friendliness, no demands to be made.
I remember seeing the Badura-Skoda library, their books and manuscripts, but we were all protective of their lives. No one ever pulled open their glass-encased shelves. The bedroom and kitchen was all we truly allowed ourselves, one evening Pat, cooking up sausages which I believe her farm-bred brothers had made, adding a good deal of fennel, to provide one the greatest meals I’d ever encountered. I can taste it still today. I don’t like licorice, but fennel is something different, which I will never forget.
And during those few days at the Badura-Skoda home I healed from my silly first romance (a relationship, giving Richard’s adamant conservatism I would never have survived in a long-term companionship), and was ready suddenly to go back to school, ready to return to the Madison life. I rented an apartment, and soon after met Howard N. Fox, with whom I have remained with for now almost 50 years.
I don’t think the Badura-Skodas ever imagined that I’d entered their precious domain. But it was so very important for my life. And I am so sad for their deaths.


Posted by greenintegerblog at 10:50 AM