interpretation of dreams
by Douglas Messerli

Jeton Neziraj Department of Dreams / presented by the City Garage, directed by Frėdėrique Michel, Santa Monica, California / the performance I saw was on Sunday, November 10, 2019.

Kosovo dramatist Jeton Neziraj’s play, Department of Dreams, received its world premier in Santa Monica’s City Garage, located in the art center, Bergamot Station. In an odd way, that seems almost appropriate for this experimental company, who have long been committed to innovative European and US productions under the direction of Frėdėrique Michel and Charles A. Buncombe. If their productions have not always shown the most scintillating of acting and direction, they have always been interesting. And for years, the company has challenged us where many other Los Angeles theaters have resisted. 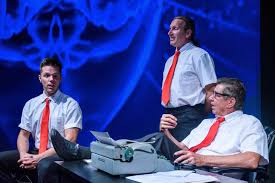 Neziraji’s play is a perfect example of their exceptional perceptions. In this Orwellian “dream play” the playwright visits a world in which the government is not simply interested in collecting information about their citizens in order to torture and, perhaps, kill them—one should recall that in Neziraj’s youth over 230,000 individuals were killed by the ethic cleansing of Serbian dictator Slobodan Miloševic, documented by numerous journalists and writers, including Susan Sontag--but are determined in gathering their most private thoughts
The six republics, all in contradiction of the former Yugoslavian country, a manufactured entity created primarily by another dictator, Josip Broz Tito, who as a Communist supporter, allowed his amalgamation of radically different cultures and religious gatherings, broken up with terrible consequences of Tito’s death and the fall of the Soviet Union’s domination.
The US, through Clinton and other administrators of his government such as Madeline Albright, worked hard to stop the carnage, and eventually supported the democracy of the Balkan countries, although Kosovo came to it at the very latest given the Muslin/Christian oppositions and the Serbian determination to keep it under their control. In 2008, partly in celebration of Kosovo’s final independence (today dismissed by Russia and China), my Sun and Moon Press published the selected poetry of one of the major Kosovo poets, Azem Shkreli, Blood of the Quill. Yet, Kosovo’s survival is still very much open to question, as Neziraj makes quite clear he is a very controversial writer in his own country. 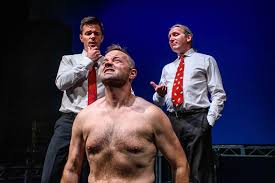 Is there any wonder, accordingly, that this highly satiric play—reminiscent of the City Garage’s beloved Eugène Ionesco—should suddenly appear, in a new translation by Alexandra Channer, in Los Angeles?
In Neziraj’s play, not only are the citizens of the country asked to suffer from a deep controlling government, but are, quite absurdly, asked to daily produce their nightly dreams as evidence of their own psychological imaginations. Like Freud’s imaginative interloping into the private in Interpretation of Dreams, the three central figures of this drama, the freshly hired young Dan (John Logan), the aged Official (David E. Frank), and the even more ancient Master (Bo Roberts), daily read these reported dreams in an attempt to perceive what they might be saying about the people who produce them: are they fomenting revolution, hinting at their who destruction of the controlling government, or just issuing subconscious suggestions about where the populace might move?
No one knows for certain, certainly not the Master nor the Official; yet the new interpreter, Dan, seems to be able to read his culture’s own dreams and to report them quite effectively to his controllers, sometimes to great distress, dozens of the dreamers going to prison and, ultimately, to their deaths. 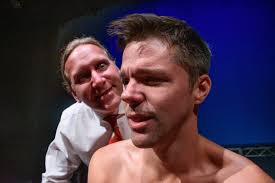 The enthusiastic young interpreter, however, soon becomes—like his predecessor, Shortleg (Gifford Irvine), who evidently was able every evening to fly away from his onerous duties, has been taken from the prestigious 4th floor to the 6th, where if you are unable to cleanse your mind puts you up into another level from you no one returns. Shortleg attempts to warn Dan, who, as brilliant in his interpretations as he is, begins to fell terribly sleep-deprived and has fallen in love with one of his reporters, Night (Angela Beyer), obviously representing the world in which he cannot successfully partake, since all of the “interpreters” are allowed little time to sleep, let alone sexual relationships.
The Master claims he never sleeps, but continually falls into his own deep dreams at his desk, often attempting to delay them by pushing his head into a bowl of cold water. Another dreamer-interpreter, Dreambuilder (Aaron Bray), tortures himself like a religious penitent in a forced attempt to dream about the figures, including the Pope, whom the higher-ups demand he channel.
This is a world of torture and delusion, as our young friend Dan soon perceives. And, in no time, as he his stripped from his own identity as well as his clothing, appearing throughout the last scenes of this play, naked, realizes there is no role for his desired humanistic behavior here.
Yet, only he can properly perceive the secret messages of the dreamworld, particularly, when dozens of dreamers reveal similar dreams. Is it a secret revolution, a subtle message of absolute disobedience? Both, of course, and only our young mindless hero can recognize it, allowing him to return from the 6th floor back into the 4th as the new Master.
It is a horrific return to what the “boss” (the government) determines is necessary. We can truly never know whether he, as the new leader, can return to the humanism he has previous sought. Memos are delivered; lies are repeated again. The beautiful young Dan is established as a new leader of a world we might not ever wish to know.
People's most private thoughts are forced to be made public. Their imaginations have been taken over by a government determined to imagine what they ourselves might not. Dreams, as we all know, mean something that cannot be explained, even to ourselves. Yet this dictatorial society works infinitely to tell them to the culture at large, a disaster, truly, to the imaginations of the private mind.

Posted by greenintegerblog at 1:11 PM