the wiz and the tin man
by Douglas Messerli

I was a bit startled the other day when Howard, after reading the cover article about actor, dancer, choreographer, and singer André De Shields, born in 1946, in his On Wisconsin magazine, asked me: didn’t we know this sartorial handsome man back in Madison?
The article recounted his career and his recent performance in Hadestown on Broadway for which he won a Tony Award for singing and acting. And, his career, a long one, including performances on Broadway in Warp!, Ain't Misbehavin', Play On!, The Full Monty, Impressionism, and the title role in The Wiz was detailed in the article. 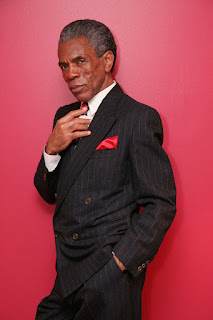 The piece also detailed his amazing performances in small university productions at Bascom Hall at the University of Wisconsin with the Screw Theater company of Titus Andronicus and De Shields playing Martha in a gender-switched production, refused by Edward Albee’s representatives, of Who’s Afraid of Virginia Woolf? I read about that production when I was a student, studying in Bascom Hall, a scandale of the day, but unfortunately never attended it. Well, it began late at late night and lasted into the early hours of morning. I have always been an early to-rise-person, which I am still today. But how I wish I could move back in time and see all the events I missed, including that company’s even more scandalous production, in which he played Tiger Lily, in Peter Pan, with the cast mostly in the nude.
De Shields argues that his friend Gordon

“used the fantasy tale to depict the loss of political
innocence in the wake of the violent crackdown on
the Vietnam War protesters during the 1968 Democratic
Convention and the of the assassination of Martin
Luther King, Jr. Members of the Black Panther party
were stand-ins for Neverland’s indigenous people,
Captain Hook was the mayor of Chicago, and Peter
and the Lost Boys were hippies. The play was to
feature a dance by seven nude young women but
ended up with just two of them plus De Shields,
who stepped in when others dropped
out for fear of consequences.”

In those early 1960s days people, particularly academics, were utterly terrified by the human body. I recall now how a photographic show of few male nudes at another University of Wisconsin campus, in Milwaukee, caused a complete rumpus, with many administrators demanding its closure. I did visit that show in a university hall and was amazed by its rather modest presentation of the male body. The fuss was truly about nothing I realized even in my youth. Why were these stuffy old men so terrified by it? Envy? Desire? Fear of their own inadequacy? Or just fear of the loss of their own youths? In any event, the company in which De Shields performed was basically banned.
De Shields, so his friends declare in this article, were literally transformed by De Shield’s personality:

De Shields captivated people with his personality,
says Viki Stewart, cofounder of Madison Civic
Repertory. She recalls the green nail polish he wore
when they met and the scene at the cast party for
The Fantasticks, where he was surrounded by young
men and women, ‘all on the floor listening to his
every word.’

I never experienced that alas. At least not with De Shields.
Howard asked me, didn’t we know him?
Yes, I admitted, I met him in that small Madison gay bar off the square in which existed the State of Wisconsin’s State Offices (it is the Capitol of Wisconsin), and was enchanted just by his appearance, and that night went to bed with him. So many years later, I can’t remember whether we had good sex or not, but I recall that night yet today. He was a beautiful young gay man on his way to fame, and I knew it even then.


Posted by greenintegerblog at 11:05 AM