THE ROUGH TENDERNESS OF VOICE

In a period of just 2 months I have now attended 3 solo concerts in 3 different theaters of major singers performing in languages other than English: in October I attended, at the Wallis Theatre in Beverly Hills, a production of Brooklyn Rider and Megos Herrera singing in Spanish and Portuguese; in November I saw the glorious Julia Migenes singing French chansons at the Odyssey Theatre; and last night I attended Dorian Wood performing XAVELA LUX AETERNA at Redcat,
On stage was a rather large barrel-chested man (Wood, who clearly prefers, as evidenced in the program, the pronoun “they”) dressed in a long white dress and earrings singing, along with a string quartet (made up of Madeline Falcone, Emily Cell, Cassia Streb, Isaac Takeuchi, with percussion by Marcos Junquera, and synthesizer backup Xavi Muñoz) songs sung by the great Mexican-Costa Rican singer Chavela Vargas, "la voz áspera de la ternura" (“the rough voice of tenderness”). 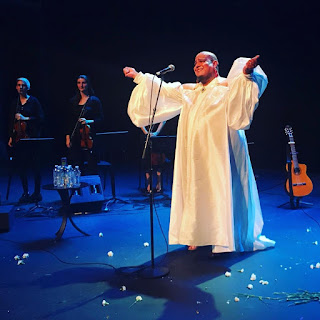 Beginning as a street singer, Vargas was known for wearing masculine clothes, smoking cigars, and toting a gun. She was beloved by many in the literary and art world and was rumored to have a sexual affair with painter Frida Kahlo.

As Dorian Wood’s baritone voice, moving sometimes to a strong tenor, reveals with lovingly rough tenderness, passionate, often almost ululating plaints, “they” are absolutely stunning, while at the same time incorporating Vargas’ famed songs along with other Costa Rican compositions, dug up, apparently by Wood’s musical director, the Spanish-born Alberto Montero, who at one point joins Woods on stage with guitar in a truly lovely, quiet love song.
At other points, Wood is joined on stage with vocalists SAN CHA and Carmina Escobar, allowing the water-slurping Wood to momentarily rest “their” vocal chords, necessary since “they” explode into such intense musical passages that even the hands of the singer tremble with delight and desire.
After listening to just a couple of Wood’s powerful songs, you quickly forget that “they” are not of the feminine sex, and begin to feel that “they” may have actually channeled the great Mexican-Costa Rican singer Vargas, an utterly amazing transformation since Wood doesn’t look anything like the singer herself. 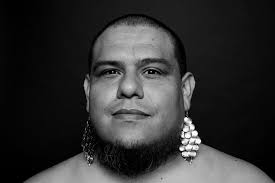 In a sense, what Wood has been able to do is to turn Vargas’ singing and masculine identity upside down, to retrieve the deep femininity within her then-radical lesbian demeanor. It is almost as if, dressed in a white quinceañera-like dress “they” reprieve the deep sexuality of the original singer.
What was just as fascinating to me, as an outsider, not fluent in Spanish, was how the audience—a nearly full-house made up, obviously, of a large group of folks of Central American and Mexican heritage—clearly knew the songs was performing. Only in major US metropolitan communities and border towns might you find an audience who could easily join “them” in singing one of the last songs “they” performed. My friends, Tony winner Paul Sand and publisher/editor Pablo Capra were equally delighted by the entire ambience of the evening.
At a time when immigration has increasing been vilified, it was truly wonderful, as I again realized, to live in such a remarkably diverse city. Wood, born to Costa Rica parents in Los Angeles, had his mother in the front row, and, after a much-deserved demand for an encore, brought up “their” mother to the stage to break open the large piñata that had been hanging over the entire proceedings.
The small, handsome woman, took several powerful swings and opened it, pouring what appeared to be small papers instead of any candy treats; the audience, fortunately, had already had almost all the sweet treats we could endure for one night. This time the standing ovations (and there were several) were truly deserved.

Posted by greenintegerblog at 9:28 AM