sailing off to save their souls
by Douglas Messerli

Lorne Campbell (libretto), Sting (music and lyrics) The Last Ship / the production I saw was at the Ahmanson Theatre, Los Angeles, on January 22, 2020.

Watching Sting’s The Last Ship last night at the Ahmanson Theatre on Grand Avenue in Los Angeles, I tried to comprehend why this loveable and politically-charged musical was not a Broadway hit when it first appeared in New York and elsewhere in 2014.
Sting himself, who tried to save the failing show at the Neil Simon Theater, should have been enough to bring in the crowds, and, indeed, it did buoy up the production for a short period before it finally closed. 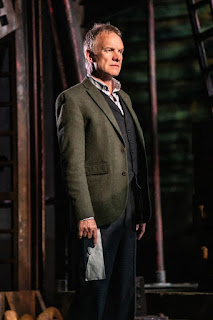 And, yes, the Geordie accents and language of the work’s characters in the Swan Hunter shipyards at Wallsend are sometimes a bit difficult to follow, particularly for those US citizens which don’t like to listen carefully as you have to in this work—and with me being recognized recently as having some older age hearing loss.

Perhaps, moreover, the original plot of the libretto by John Logan and Brian Yorkey was a bit too complex, particularly when it came to the political issues in Britain during the tyrannical rule of Margaret Thatcher in the 1980s—devastating not only the shipyard workers, but the country’s mine workers and other ordinary laborers—was not something US New Yorkers were very aware or even caring about, particularly given the cost of their theater tickets.
The version I saw featured a rewritten book by Lorne Campbell, featuring a new cast who had toured the United Kingdom before settling into a fairly long run at Toronto’s Princess of Wale’s Theatre. Campbell apparently trimmed the work down, along with Sting refocusing the ending less on the male shipyard workers than upon their mothers, wives, and lovers.
As Los Angeles Times writer Jessica Geltstaff reported: “This winsome landscape is dominated by women like the ones Sting grew up with and Campbell came to know while living and working in post-industrial Newcastle. These communities are held together and driven by their women,” Campbell says.
But there are larger issues at work here which drive this creation into a different world than the typical Broadway musical, and which might have alienated the supposedly sophisticated New York audiences.
First of all, with 19 original songs, and three reprises this “musical” might almost be described as an opera instead of a musical—or at least an operetta. And then there are Sting’s nearly miraculous lyrics, embracing everything from Karl Marx, a discussion of how the pugilist hero, Gideon Fletcher (a wonderful Oliver Saville), learned how to dance, to quotes from Lewis Carroll, Dylan Thomas, and various other poets—mostly uttered by the most unlikely intellect of the shipyard workers, Adrian Sanderson (Marc Akinfolarin)—discussions of the constellations (“It’s Not the Same Moon”), meditations on death (“Dead Man’s Boots”), saucy sexual numbers ("Mrs. Dee’s Rant," brilliantly performed by Orla Gormley), as well as lovely ballads such as “All This Time” (sung by Sting and Jackie Morrison). 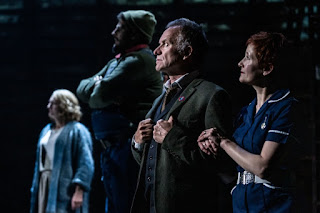 Almost every character in this work gets the opportunity to show their powerful musical talents—and they all perform quite brilliantly, as if we were almost encountering a cabaret show linked by short spoken episodes.
And then there’s the music, the startling eclectic score sweeping up so many different composers such as Richard Rodgers, Marc Blitzstein, Kurt Weill, and others. A good listener simply becomes overwhelmed. Poetic meditations alternate with full cast renditions of numbers such as “Hadaway (Out of Your Tiny Minds?") sung by Davey Harrison (Matt Corner) and cast.
In short, I believe it is because Sting’s work is stuffed with so much literary and musical heritage that it simply overwhelmed some of its earlier audiences.
Here in Los Angeles, with a sold-out crowd, everyone seemed to love this event, even the two women who sat next to me, guessing I was an-on-aisle reviewer, almost begging during the intermission for me to love it.
Well, I did love it and told them so. And for the first time in ages, long hating the tradition of necessary standing ovations, I too stood up and heartily applauded.
The problem with The Last Ship is its own intelligence, its seriousness, its cleverness, the prolificacy of its composer’s sources, and the depth of feeling that he has imbued upon this work. Would that all US musical conceptions had these flaws.
Los Angeles is fortunate to begin a new touring version of this significant work. I truly think that its later venues in San Francisco, Washington, D.C., and Detroit might find equally appreciative viewers—not because of their innocence or the possibility of their being rubes, but because of their contemporary sophistication.
In the end, this work seems a perfect match with the Weimar Republic works being performed across the street at the LA Philharmonic. Sting’s compositions with The Police have always carried with them a kind a cabaret sensibility that employs a narrative of sensual love and danger at the same time. Gideon, the central hero of this work, even suggests that his has been watching his lover Meg Dawson (Frances McNamee) for the all the years they were growing up, just as she asserts she was attempting to bring him closer to her.
Finally, Sting’s work seems almost Wagnerian, as the whole company, beyond imagination, sail off in the ship of their own creation, certainly a kind of Flying Dutchman-like ending, with the men and women of these now-vacant shipyards sailing off to seek their own souls. They recognize they may lose their souls and even die aboard the ship they have never before sailed. But they hand over their lives to their new commander, Gideon, rather than give in to the brutal new British economy. Who can blame them?

Posted by greenintegerblog at 10:41 AM