them and us
by Douglas Messerli

Sam Shepard Killer’s Head and The Unseen Hand / directed by Darrell Larson at The Odyssey Theatre Ensemble, the production I saw was on Sunday, January 26, 2020

The other day I attended two short plays by Sam Shepard at The Odyssey Theatre Ensemble in Los Angeles. The plays, Killer’s Head and The Unseen Hand represent two of the strangest plays I have seen in a long while, reminding me somewhat of the highly incompetent filmmaker Ed Wood.
Yet we know Shepard is everything but incompetent. It’s just that these works seem both more like amalgams of ideas thrown together in a baggy mess of plot than fully conceived dramas, while nonetheless being totally fascinating.
The longer second play is certainly the most interesting. Camped out in a 1951 Chevrolet near a highway that leads to Azusa in California’s San Gabriel Valley, is the grizzly ex-cowboy, Blue (Carl Weintraub). That town’s population at the time this play premiered was about 20,000, and for anyone who has been there even today, one might easily describe it as Gertrude Stein did Oakland: “there is no there there.” 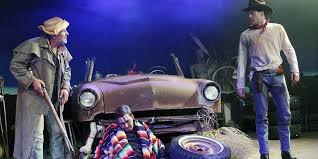 Blue—surviving his brothers Cisco and Sycamore, the three of them having been the peers of the Jameses and the Daltons of the previous century—has lived in the automobile apparently for years, since he is now 120, talking to himself and imagining the villains who travel Route 66, including the dangerous hot-rodders of the modern age.
He has been alone, apparently, for so long that when suddenly a being is beamed down from Outer Space, we cannot quickly determine whether he comes from this Methuselah’s imagination or from the Nogo land which he claims. This young figure, Willie (Matt Curtin), has, he explains, escaped his planet in order to save it, spouting words, as the critic Mel Gussow described it, “like a computer headed for the repair shop.”
Willie explains that the people of his world have an unseen hand tattooed upon their heads, which controls their actions and destinies. Making Blue younger, and calling up his two brothers from the dead, Willie hopes to return with them to Nogo land and fulminate a revolution.
Cisco (Jordan Morgan) soon arrives, dressed in a handsome serape, that makes him almost appear to be a 1960s hippie, followed later by the more sartorially-clad, dressed all in black, Sycamore (Chris Payne Gilbert), a former train robber who is heartily saddened to hear that there are no longer any trains—at least not near Azusa, the town that describes itself as containing everything American from “A” to “Z.” 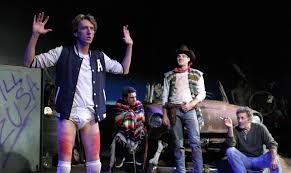 This now Sci-fi / Western adventure story suddenly torques into yet another dimension when a young male cheerleader suddenly arrives on the scene, his sweat pants dropped to his shoes, revealing a series of rope burns branded upon his legs by sports players from Azusa high school in manner that can only remind one of the viral homophobia that killed Matt Shepard. This new figure, simply called the Kid (Andrew Morrison), spends most of the play in his skivvies, since the gun-toting Sycamore, suspecting the Kid of evil attentions and perhaps being somewhat homophobic himself, will not permit the boy literally to “pull up his pants,” keeping the Kid in near-eternal infancy.
Shepard, accordingly, has brought together several figures representing the past, the present, and the future, each colliding and crashing against one another with toxic notions of masculinity in order to determine whether or not there is a way to save the universe from, as Willie proclaims, “mass suicide.”
Can we be saved from our past errors of the domination of others that Sycamore, or, when the Kid steals away the gun of his torturer, the evident stupidity of the present as the boy (a cheerleader one must remember) humorously gushes out his love of all Azusa, the school, teachers, Lion’s Club, etc. etc.—and this coming all after just his being abused by his peers—or the horrors of the future? Perhaps there was never a time, considering Trump’s presidency and the ever-encroaching dangers of climate change, in which the playwright’s work has had greater significance.
In Shepard’s moral fable, they all find a way to temporarily work together, Sycamore allowing the Kid to pull up his pants, and, in a slight shift of relationships, Blue walking away with his more-tamed brother Cisco and the almost brain-dead Willie, while Sycamore determines to stay behind in the 1951 antique of an auto, perhaps to fight off the devils of the highway near him who have taken away his train-robbing livelihood. 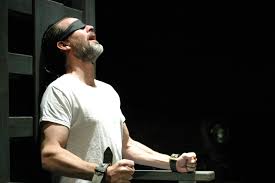 The first play of this duo, Killer’s Head, is only an eight-minute monologue in which a man (Steve Howey in the production I saw) sits strapped into an electric chair awaiting the bolts of power which will put him to death. Yet instead of imagining the terror he is about to embrace, he thinks forward to a continuation of the mundane life he has apparently led, despite his murder, so I gleaned, of his wife.

His concerns are not the fear of death but visions of a new pickup truck, a career as a horse trainer, and other possibilities of life.
Shepard’s juxtaposition of events clearly turn murder into an everyday event, while everyday dreams and actions become deeply meaningful relationships with life itself.
Yet, here Shepard’s irony is just a little too cute and quick. We know the facts even before the play has begun. It is nearly impossible for any of us to truly imagine death. And living is filled with thousands of truly unimportant events that seem of value only because we imagine them to be.

Los Angeles, January 30, 2020
Reprinted from USTheatre, Opera, and Performance (January 2020).
Posted by greenintegerblog at 5:58 AM