Tabaimo and Maki Morishita (director and choreographer) Fruits Borne Out of Rust / REDCAT (the Roy and Edna Disney/CalArts Theater) / the performance I saw was with Lita Barrie on Sunday, February 23, 2020

I never, as a critic, enjoy complaining about the difficulties one has in describing the event he has just encountered. I’ve done it only a very few times. But the rather stunningly beautiful Tabaimo and Maki Morishita performance of their Fruits Borne Out of Rust is just such a work. I think part of the problem exists within me, enjoying the sensibility of Japanese culture without entirely being able to completely comprehend it.
Having just come back from the completely energetic dance performances of Lula Washington and the Contra-Tiempo Urban Latin Dance Theater performances at the Wallis Annenberg theater in Beverly Hills, I was a bit underwhelmed by this quieter and more intellectually conceived work.
Both of those previous concerts were so exciting to the audience and performers that you had to just wonder at their exuberance. Combining, Latin American, African, and black American cultural references made me realize just how much of US dance depends on these sources. After all, jazz and Latin American rhythms are at the heart of what is perhaps one of our very greatest of contributions of the popular theater musicals, Leonard Bernstein’s and Jerome Robbins’ West Side Story.
Just yesterday, in The New York Times Gia Kourlas rightfully called out the abandonment by the rather dour Belgian director Ivo van Hove’s version of the new Broadway representation of the great musical made even greater through its cinematic presentation. The finger-clips, she argued, represented the very visceral and bodily tension of the young people of that period, a kind of beat-like energy that went right down their torsos into their legs. As Kourlas quite brilliantly argues:

Let’s just say that US citizens, like as the name of one of the characters in West Side Story, like “action.”

Compare that with director Tabaimo’s note about the work I saw the other night:

Rust is the reaction of iron undergoing oxidation in effort to obtain a more
stable state of matter.

From instability, stability is born. Then, when that stability loses its balance,
an unstable state is born again….

Though it may look as though the cycle is going around and around, it is
actually progressing little by little until the fruits of this cycle are born.

Those fruits will not be still, but rather will create another phase of instability.

And indeed, this performance by the excellent dancer Chiharu Mamiya, a classically trained ballet dancer, does gradually represent just those cycles and transformations that Tabaimo and Morishita proclaim. 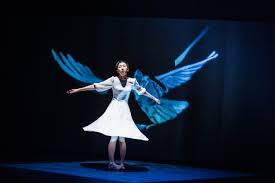 Brief—in my mind all too brief—exultations of exciting dance movement alternate in this work with slow-moving, on-the-floor arm and leg gesticulations. These seem more like something, to me, out of Kabuki theater than traditional Western dance. I realize my lack of perception, and my own inability to recognize the theoretical possibilities of dance—which I also truly admire—yet by the performance’s ending I felt disappointed, particularly after the wonderful final Medea-like let-go of Mamiya at the end. Somehow I felt frustrated to not experience Mamiya’s balletic abilities.
Yet, she was able to convey a great many emotional expressions even laying on the floor, particularly when alternating in a colorful leotard with more active expressions of her skills. But the true genius of this work exist in Tabaimo’s startlingly beautiful video projections—reminding me somewhat of the Barrie Kosky videos for Mozart’s The Magic Flute. 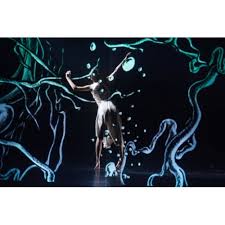 At various times the dancer in this work is zipped up in the set itself, locked in and out of her own performance, presumably representing her inner transformations from rust to regeneration. It may be a too-literal presentation of the dance performance’s libretto, but, if nothing else, Tabiamo’s visuals are absolutely beautiful and create a kind of marvelous tension between the passivity of the dance with an almost electric imagination of what the dancer will soon become as she literally rips her way into and out of our perception. 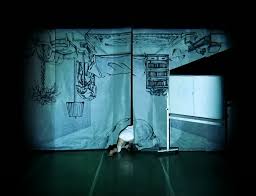 In the end, I came to appreciate this work because it was based on a theory inside the body’s simple ability to explode in its need to express possible motion. Perhaps the citizens of the US need to curtail their more violent expressions and maybe the Japanese need to let themselves—and I say this after reviewing dozens of Japanese films by Kurosawa, Oshima, Teshigahara and numerous others—desire to open themselves up to a livelier expression of love and desire. Rust and oxidation just doesn’t do it for me.
As my theater companion for the night, Lita Barrie, and I rose to leave the REDCAT Theater, she asked me what I thought about the performance. I didn’t immediately answer since I do not like to have other theater-goers overhear my appreciations and peeves. Each to their own views I would intensely argue. But as we left the theater for the parking lot, I suggested that I found the dance quite “gestural.”
She laughed: “That’s just what the man next to me whispered as we were about to leave.”
But “gestural” is not necessarily a negative statement. It’s simply a different tradition from ours, one that I might want to explore more deeply. If the highly expressive Method Acting and melodramatic dramas of US theater define us, perhaps just a gentle movement of the hands, the face, the legs, might be a better way to express our pain and frustrations. Perhaps the cycle of rust to oxidation represents a far longer view of human life. And perhaps the slow movement from one to the other is not so very different from what occurred in West Side Story: the past to the present, when the oxygen of the one redacts the other. The newly acclimated Sharks, after all, destroyed the Jets.

Posted by greenintegerblog at 11:02 AM