Douglas Messerli | "Explaining to the US What Evil Is All About (on Paul Hindemith's Murderer, Hope of Women and Kurt Weill's The Seven Deadly Sins as directed by Essa-Pekka Salonen)

explaining to the us what evil is all about

As part of their investigation of the German Weimar era—that decadent period of German history before Hitler’s rise and the later pre-World War II atrocities—the Los Angeles Philharmonic, the other night, presented an amazing trio of works, conducted by its former director, Esa-Pekka Salonen: Paul Hindemith’s Murderer, Hope of Women (Mörder, Hoffnung der Frauen) based on the highly controversial play (it closed after a single performance) by artist/writer Oskar Kokoschka (a complete English translation of that play follows this review), Kurt Weill’s and Bertholt Brecht’s The Berlin Requiem in Potsdam Under the Oak Trees, and Weill and Brecht’s last collaboration, The Seven Deadly Sins. 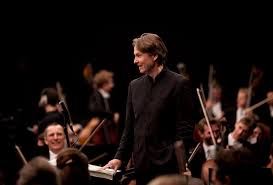 The great Bauhaus architect/designer Oskar Schlemmer did the original costumes, choreography, and sets for the Hindemith performance, which was so controversial that it was removed from the State Theater in Stuttgart in 1921, after only its second performance. This work might be one of the most often performed work of an absolute flop of first performances that ever existed.
Despite its terribly dark tones, however, Hindemith’s 1919 work is not only highly lyrical, but filled with beautiful romantic flourishes, with 3 flutes, an English horn, rumbling brass, clarinets, drums, tam-tam, cymbals, strings, and 2 harps—along with a full chorus (in this case the talented Los Angeles Master Chorale, headed by Grant Gershom), and eight singers led by Madeleine Bradbury Rance (as the woman) and Christopher Purves (as the Man). In the Sunday production I saw Alaysha Fox replaced Anna Schubert as the First Maiden, and there are 2 others who observe the horrors of the woman and man in their sexual mis-match, ending in love and murder. 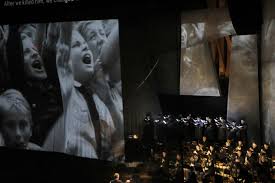 Hindemith, highly disturbed by his World War I service in the regimental band and later experiences deep in the trenches, came back from the War disorientated, but yet re-energized to create his musical compositions. He composed this work at the at the age of only 24.
The LAPhil performed this work with their usual professional polish, soaring along with the composer’s score in its often lush rises and flourishes; yet I felt it seemed somehow a bit toned down, particularly after hearing, a couple of weeks ago, the absolutely thrilling renditions by Gustavo Dudamel of Rachmaninoff and Stravinsky (a concert that I will never be able to remove from my head thank heaven). It may have been that the seemingly heavy metal cut-out shards created by director Simon McBurney and production designer Anna Fleischle to suggest the breakup of the Weimar world, may have slightly muted the normally glorious sounds of the Walt Disney Concert Hall.
Nonetheless, Salonen and the great orchestra he was conducting managed to lift up this intense narrative into the near stratosphere of Disney Hall.
As a short prologue to this piece reminds us, all of the composers and writers involved in this project, having to escape Nazi Germany for their religious convictions and being classified by Hitler and others as “degenerate” artists, eventually made their way to the US, and ultimately arrived in Los Angeles, helping to create the long literary and musical legacy that survives still today. 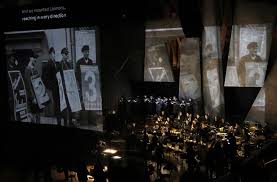 Escaping to Los Angeles, German authors along with Weill and Brecht attempted to bring their somewhat formulized notion of world-wide evil to the US, in the central piece of the evening, the delightfully evil Seven Deadly Sins, with two versions of a character named Anna (Nora Fischer, dressed in a slinky blue gown) and her theatrical other, in this case a dancer (Gabriella Schmidt).
Together the two figures travel from their Louisiana home to visit the major cities of the US, including Los Angeles and San Francisco, seven cities of course, discovering their personal attachments to Sloth, Pride, Wrath, Gluttony, Lust, Greed, and Envy, yet gradually overcoming each before returning to their Louisiana home and, presumably, redemption.
Here, with somewhat Brechtian staging, the singer and dancer do not remain on stage but move through the orchestral seats in order to engage the audience with their sins. 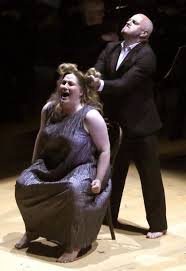 All of their exploits are interspersed with a chorus of the family back home (Jarrett Ott, Christopher Purves, Peter Hoare, and Simon Bode) who, as Los Angeles Times reviewer Mark Swed described as appearing “more like East Side émigrés than Southerners. Then again, what did Brecht and Weill know about Louisiana?”
I can just say that when Fischer sings that state’s name in German, it sent shivers down my spine, the same way Weill’s and Brecht’s great Rise and Fall of the City of Mahagonny made me feel about a state I could not even imagine living in, Alabama. In their works, in which the whole of the American continent was made to feel the same sins of the world they had had to abandon, they helped the culture to perceive they were not to be isolated from what was happening in the whole world, and, even more importantly, that they were not innocent from its sins. The Seven Deadly Sins were not “over there,” but scratching the backs of everyone in LOUisIANA, Al-abMAMA” and everywhere else where we might have lived.
For the world in which we today live, there can be no better lessons than these and other European émigrés taught us through their arts. O please, send us your…tired, poor, and even your rich. We need them, as this LAPhil concert clearly reveals to us.

Posted by greenintegerblog at 1:01 PM