a ceremony about evil
by Douglas Messerli

Let me begin this review with a series of appreciations. I truly admire Ron Sossi and all that he has done over now 50 years at the incredible Odyssey Theatre Ensemble in, first Hollywood, and soon after, West Los Angeles. There is to my thinking no more of an exciting company presenting US and European-born theater classics in the city. Some of the most exciting theater works I have experienced in this vast crucible of theatrical explorations has been at his Odyssey theater.
He’s gone everywhere, from Samuel Beckett, Ezra Pound, Max Frisch, Bertolt Brecht, Stephen Sondheim and into this incredible season 50th-51st season, to Irene María Fornes, Gertrude Stein, Sam Shepard, and the upcoming Peter Nichols’ production of A Day in the Death of Joe Egg— something you must simply bow down to. What other theater in the US might present the great singer of French Chansons, Julia Migenes on the very same day as Jean-Claude van Itallie’s 1968 The Serpent? It is truly astounding. Every season of the Odyssey’s schedule is exciting, offering enticingly original productions of new and older theatrical productions that excite me. I have praised so many of their productions that I nearly blush, as if I were a theater hack devoted to their remarkable annual seasons..
The very thought, moreover, that he produced, as his company’s very second production in Spring 1970, only two years after the highly controversial late 60s production, is breath-taking. Los Angelenos must have felt their pulses expanding with wonderment. I wish I would have been there, the year Howard, my now husband and I, first met back in Wisconsin. Sossi is a master at recreating experimental theater in a way few others are in Los Angeles.
The production that Howard and I saw the other day at the Odyssey, despite its engaging performers—among them Riley Rose Critchlow, Avery Dresel-Kurtz, Joseph Gilbert, Kristina Ladegaard, Marie Osterman, Anthony Rutowicz, Keaton Shyler, Ian Stewart Riley, Ahhei Togun, Terry Woodberry, Denis Yolén, and Peyton Young—appeared, after I watched tapes of the Chaikin-directed performances at his Open Theatre, just a bit too audience-friendly, perhaps even a little sanitized. 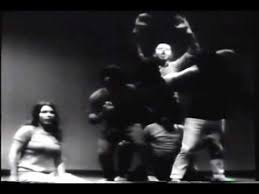 For example, the tree containing the forbidden fruit in Chaikin’s Open Theatre version was made up of only males, mostly gay it appeared, hissing and lisping, as in their entanglement some shook their fingers between the crotches of the others, suggesting both rather phallic images as well as the duality of tongues with which the serpent spoke. In other scenes, the entire company groans and moans as if suffering the hell of their own evil behaviors.
Of course, the version I saw in the tape was in a gritty black-and-white, while the Odyssey production was in muted colors, browns, oranges, whites, and dark reds. And, unlike Sossi’s cast, Chaikin’s worked with him for several months even before he brought in van Itallie to create a more coherent structure and a slight narrative thrust. 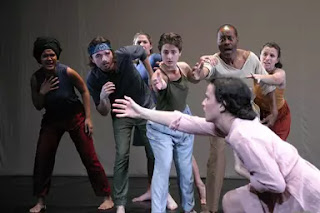 In the end this work is more of a highly ritualized collage with dance and pantomime rather than a standard play. Van Itallie, himself, described his theater more as a ceremony that existed between the actors on the stage and its audience.
Sossi clearly attempted to reiterate that relationship by initially having the cast members read of out some of the names of audience members (mine was among them), and later, after Eve gives in to the serpentine seduction, even passing out a few apples to audience members: the woman in front of me joyfully bit into one. Yet the Odyssey’s mostly West Side Los Angeles audience, I believe, were not quite ready to submit, as Chaikin’s late 60s audience might have been, to the experience of the Eucharistic sermon of man’s evil to his own kind—which includes not only the essential Eden scene, but the death of President Kennedy (Dresel-Kurtz plays Jackie), the shooting of Martin Luther King (performed by Woodberry), a wild sexual orgy as the cast, freed from their lack of knowledge, go into choreographed sexual passions, as well as the murder of Abel by Cain (Gilbert). One woman, in our audience, was evidently unprepared for the sexual energy released, howling loudly through the scene, as if she had never imagined sex pantomimed on stage. Surely in 1968, no one at the Open Theatre would have laughed out of what was clearly embarrassment. 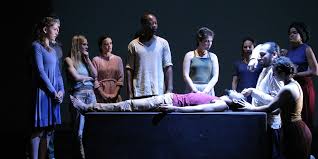 At other moments the audience seemed more contained than transformed by the ceremonial experience the director was attempting to create. The Beckettian-like lament—"I’m in the middle, having lost the beginning, and going to the end”—might have been lost for some of this audience members, although it says everything about the condition of those suddenly discovering that they are soon to die. As a critic, I often get asked by caring and well-intentioned women and men, “What do you think this means?”
I don’t want, however, to suggest that LA audiences are not capable of enjoying profound theater. The more I attend this city’s theater events, the more profoundly I am moved by their willingness to attend and contemplate complex works, and this audience, in its sincere applause, totally embraced van Itallie’s work. 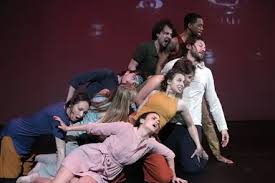 One of the most touching moments—which I think moved every one of us—was Cain’s remorse for having killed his beloved brother because God had refused his sacred offerings. Just a few days earlier I had witnessed Queen Elizabeth’s sudden remorse for her beloved Deveraux’s death at the LAOpera. The absolute shock of what Cain has just done in this play presents an entirely new vision of what, in the Old Testament, is simply presented as an unforgivable crime which dooms him to an expulsion as severe as Adam’s and Eve’s.

Even Sossi seemed to suggest his own reservations about reviving such timely ensemble-based works.

Many of the ensemble projects of that
time are difficult to re-create, as they featured
large casts and were highly personal in terms
of actor input and content…unique products
of their time and place. …At this point we have
no idea if this “Ceremony for Theatre” speaks
to the audience of today, yet so many of his
themes are universal enough to make me
believe that it has a good shot.

He argues, and think quite rightly, that despite those reservations The Serpent was “do-able.” It is, and I truly appreciate this director’s willingness to dig back into that history to let us see a new vision of such an iconic work.

Posted by greenintegerblog at 8:40 AM