In his opening night review of the LAOpera production of Gaetano Donizetti’s opera Roberto Devereux, Los Angeles Time’s music reviewer Mark Swed began by noting how the composer himself felt that his 1837 opera had been jinxed. The opera as Swed notes, was born out of his own wife’s death and written and performed during a cholera outbreak in Naples.
When Swed wrote his review, it had not yet been perceived just how much California itself was already being effected by the new coronavirus, an equivalent of cholera (fortunately, the Dorothy Chandler Pavilion production played to a mostly full audience, although any intermission cough was duly noted by its audience). 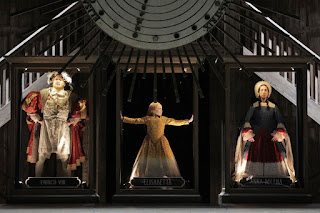 The major singer, highly featured in early announcements of the production, was to have been the great tenor, now baritone director of the opera company, Plácido Domingo—who had to bow out not only of his role of the villain of this piece, the Duke of Nottingham, but, because of revelations of sexual abuse—was bravely replaced by the talented Hawaiian-born singer, Quinn Kelsey.

The beautiful Spanish singer Davinia Rodríguez was to have performed the most important role in this opera—not fully realized as the masterpiece it is until the 20th century rediscovery of the role by Beverly Sills, who Howard and I saw perform it at the Kennedy Center in Washington, D.C.—after developing health problems, replaced by the American singer Angela Meade (a native of Centralia, Washington), who will reprise this role in September in the New York Metropolitan Opera production. 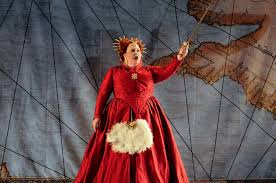 It is Meade, this time around, who un-jinxed this work, bravely singing the role of Elizabeth I, without any stage rehearsal time on opening night, from a stage-side music stand, while the choreographer Nicola Bowie equally bravely acted out her movements on center stage.
I was too young and operatically naïve to remember or, even then, have been able to evaluate “Bubbles” Silverman (the early incarnation of Beverly Sills), although we also saw a couple of her other major operatic presentations. But Meade certainly now owns this role, singing powerfully and yet scintillatingly beautiful, and suddenly coming onto central stage in the production I saw with friend Lita Barrie, as a bit more zaftig version of the queen than Rodríguez might have represented, but perhaps more dramatic for that very fact. If she loved Roberto Devereux (the truly excellent Mexican-born singer, Ramón Vargas) she is equally terrifying in her willingness to revenge his evidently quite chaste love of Nottingham’s current wife, the lovely soprano, in the production I saw, Ashley Dixon.
Her color is blue, and she is the closest we can get to an early 19th century version of a blues singer. After all, she has been forced by her very best friend, the Queen, to marry the less-than-dashing Nottingham, who loves her but also attempts to lock her away and violently punish her for his own jealousy. 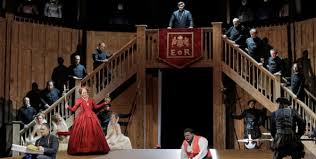 At the heart of this opera, and certainly in director Stephen Lawless’ long-traveled version of it, is death, the many murders of Elizabeth’s father, some of which are encased, like museum morgue victims, in glass. Elizabeth’s desperate need for love, despite her childhood-taught lessons of killing off anyone who you felt had betrayed you, is the tragic center of this work. She clearly wants to save her former lover—a simple return of the ring she has given him might save his life—but despite all best intentions, the couple who are most involved in this love tale, Devereux and Nottingham’s wife, are locked away into worlds which the powers that be cannot comprehend their innocence. Devereux is tried as a traitor for even attempting to escape his proclivities, while Sarah is held as a prisoner in her own home for having even imagined a more robust lover in Devereux.
All of the singers in this production were excellent, along with Grant Gershon’s remarkable chorus, singing through the almost voyeuristic portals, represented in their appearances, through Benoît Dugardyn’s simple wooden set. There may be far many more complex visions of Elizabeth’s court, but his simple design allowed us to see how the constantly peering figures of the Queen’s courtiers and women associates help allow her to destroy those she most loves. The tragedy here is not simply the Queen’s temperament, but the inexplicable interferences of the court itself. When Elizabeth heartily taps her cane to send them all running, you can truly comprehend her frustrations of being ruled by history itself. 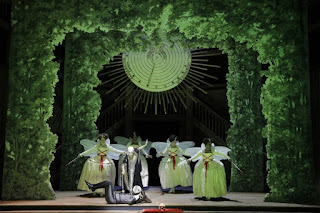 And in her last scene, we recognize that now, as an old woman, without her crowed head of hennaed hair, that she has lost her regal power as well as having lost any opportunity for love. Meade is totally brilliant in her version of a Donizetti mad-moment. Covered in white, we recognize she is as pale as death itself. Earlier versions of those killed by history, again encased by glass, are wheeled out. After all, isn’t British monarchical history actually a list of killers and their victims up until the current day?
Finally, given all the operatic heroes who made this operatic production significant—Meade, Bowie, and Kelsey in particular—one cannot ignore the amazing wonders of conductor Eun Sun Kim, recently appointed music director of the San Francisco Opera. All LAOpera fans love conductor James Conlon; yet she brought out a sound from the LAOpera orchestra that shifted its usual muted acoustics to something that was quite glorious. The Dorothy Chandler Pavilion, which has long recognized problems of muted orchestral sound, suddenly seemed to open up to new possibilities. If I am growing a little deaf, last night I heard every brilliant cord of Donizetti’s previously jinxed opera. And it was as if this opera’s sometimes clotted and unclear motivations of his composition had suddenly sprung into new life. I can’t wait to see Meade wow the Met audiences.