a lost alabama: mockingbird in reverse
by Douglas Messerli

Howard and I first saw Kurt Weill’s and Bertolt Brecht’s Rise and Fall of the City of Mahagonny in the early days of the Washington National Opera, Howard suggests at that city’s Lisner Auditorium, but I believe it was in an early operatic performance at The Kennedy Center. The only WNO production we saw at Lisner, if I remember correctly, was Frederick Delius’s Koanga in 1970, their only performance of that year. Perhaps we saw the Weill/Brecht opera the next year when the Washington National Opera moved over, thanks to Roger L. Stevens, at the new city treasure.
We were young, and probably still innocent enough that I could not fully appreciate its dark, bawdy, and satirical views. Of course, I loved the song “Moon Over Alabama” (David Bowie’s version):

Oh, moon of Alabama, it's time to say goodbye
We've lost our good old mama
And must have whiskey or you know why

But I recall the opera as being more of a kind cabaret event than a true opera. And surely, at times, this Weill-Brecht work does bear more resemblance to The Threepenny Opera than to the “true” operatic repertoire—whatever that might mean. 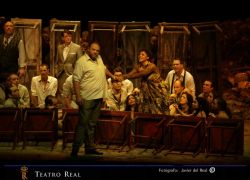 Yet, what a delicious discovery over the last two days was the on-line streaming of Teatro Real Madrid’s 2010 production of this work, conducted by the Spanish version of our Venezuelan/Los Angeles hero Gustavo Dudamel, Pablo Heras-Casado (quite brilliantly conducting the Bolshoi Theatre Symphony Orchestra), and whose production was directed by the Catalan-based experimental La Fura dels Baus geniuses Alex Ollé and Carlus Padrissa.
As the Spanish newspaper’s El País’s J. Á. Vela Del Campo summed it up:

The much-feared new production by Gérard Mortier in
the Teatro Real of Rise and Fall of the City of Mahagonny
resulted in a success on several levels: vocal, orchestral,
choral, theatrical, dramatic. This opera is above
all an assemblage of different artistic disciplines.
In this production they came together like clockwork,
and this time it was Kurt Weill
and Bertolt Brecht who benefited the most." 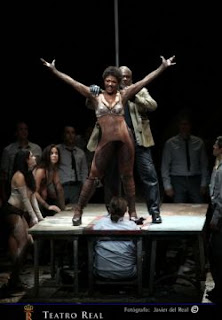 Suddenly, in the singing of Jane Henschel (as the evil leather-bound matron of Mahagonny, Leocadia Begbick), Willard White (as her cohort, Trinity Moses), Measha Brueggergosman (as the beloved whore Jenny), and Michael König (as the Alaskan gold-miner Jim MacIntyre, who falls for Jenny hard) I realized what a remarkable opera this truly was. 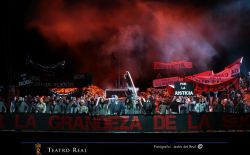 I will not, this time around, attempt to relay the silly plot in its entirety. Weill and Brecht confused geography and American dialect enough to make the story so improbable that it is almost impossible to make out why the three central escaping felons have moved up to a desolate northern spot in the South of the country in which they feel safe enough to establish a kind of early Las Vegas-like city, Mahagonny, where liquor, sex, and money rule—let alone explaining why Alaskan miners are drawn to it, along with other slimy businessmen, in this production dressed in suits.
The only thing that is important is that none of the would-be pleasure-seekers are unhappy where they’ve landed, creating shifting factions in their newly found community, and resulting, eventually in the death of MacIntyre which ends in the sinful city’s fall. Las Vegas’ dimmed neon lights in our current pandemic remind me of that same demise.
Yet watching this bawdy satire over the last two days, Weill’s remarkable skill as a composer nailed me. I laughed, cried, suffered with the numerous shifts in his score from the late 1920s, and which in its premiere in 1930 resulted in the Nazi’s hatred, and in both Weill’s (in 1933) and Brecht’s (1939) move to the USA, which, along with so many German artists, helped make for their importance in US culture.

Posted by Douglas Messerli at 10:29 AM No comments:

Gertrude Stein and Virgil Thomson, The Mother of Us All / performed by the Juillard Opera, with the New York Philharmonic at the Metropolitan Museum of Art, performed on television on April 3, 2020

Gertrude Stein’s and Virgil Thomson’s significant 1947 opera, The Mother of Us All—performed on live-television the other night from the Charles Engelhard Court of the Metropolitan Museum of Art—was one of the great events of 2020, and a particularly needed tonic in these difficult times of the COVID-19 pandemic.
Yet, Thomson’s score, buried as it was, as The New York Times critic Zachery Wolfe put it, “far-off under the Branch Bank facade, sounded less snappy than they should.” Stein’s lyrics, however, sung vitally by soprano Felica Moore, did come alive, and were the center of this work. 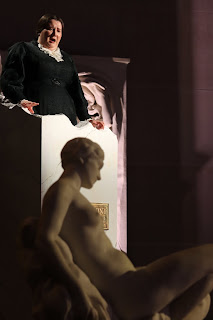 Fortunately, Stein’s pastiche of language grows even stronger in this production. This is not only a work about the great ur-feminist Anthony, who helped women get the opportunity to vote, but is a story about all those, past and present, who were disenfranchised, women, blacks, the poor, and just those hadn’t the opportunity of expressing themselves in the democratic process, as well as people who helped that governance to come into being, such as Daniel Webster, John Quincy Adams, and even Lillian Russell.
Anthony, in this work, becomes a symbol of agreeable but endless insistence on the rights of all those who cannot speak up for themselves. With violins, violas, trumpets, piano, and drums, she sings out as a lesbian (whose partner expresses much of her lover’s history, demanding that Anthony speak out more loudly than agreeably) for the causes in which she believes.
Susan B., however, realizes that despite her constant rejections to be represented by the ballot,
that “they listen to me, they always listen to me.” Or as Susan herself realizes, that despite that men “are so selfish,” that they are also “such poor things,” and that “men are gullible, they listen to me.”
In a strange way, the power with which Susan courted her male and female audiences through her agreeable and polite behavior she knew, all the while, “she was right because she was right.”
It’s hard to perceive the powerful Felicia Moore as a quiet person, so forceful and magnificent is her singing. But like the male figures of which she sings, she convinces us of her righteous power. And we come to believe in her abilities to convince us, particularly through Stein’s use of minor figures who pass through her life such as Jo the Loiterer (Chance Jonas-O’Toole), Chris the Citizen, and Angel More, who weave into the stewpot of Stein’s arching history a realization of how Anthony was both part of the world in which she lived and highly aware of the future in which women would endlessly have to continue to battle. 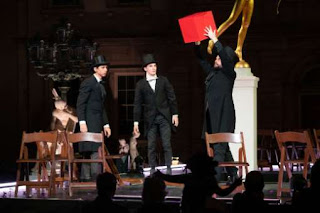 As reviewer Kurt Gottschalk expressed it, quoting from Stein’s lyrics: “They [men] fear women. They fear each other. They fear their neighbor. They fear other countries. And then they hearten themselves in their fear by crowding together and following each other.” I can’t imagine a better expression of the Trump reign.
Language is at the heart of this marvelous opera. As the noted orator Daniel Webster (William Socolof), in Stein’s and Thomson’s opera expresses the pit of identity, an issue of which Stein, who proclaimed that we simply repeat ourselves, was always interested:

The pit he dragged a pit.
My name cannot be any other.

He digged a pit he digged it for his brother.

Digging a pit was what all the men in Susan’s life did, and even after, when women had gained the vote, they choose to cancel the ballots by destroying the ballot boxes. The battle rages still today not only on sexual lines, but regarding partisan politics. The mother of us all has still not yet helped to heal us alas. 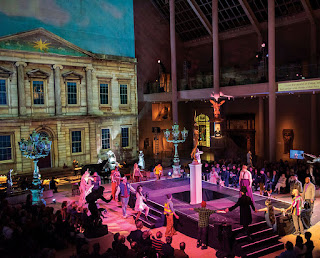 I need to add that in 2000, Felix Bernstein played a child in the New York Opera production with Lauren Flanigan of the same opera, and he would return from his rehearsals and sing out long passages from the opera so beautifully that I nearly cried. I think that during this time Felix and I truly bonded. I was terribly moved by his singing, particularly since it was by beloved Stein. His young voice more completely characterized Stein’s Anthony B. than any soprano might.

Posted by Douglas Messerli at 12:28 PM No comments: 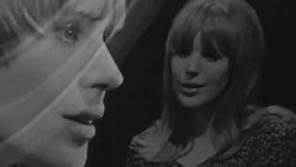 Posted by Douglas Messerli at 12:42 PM No comments: