If you don't know the Joyce Theater in New York City, it is the very center of US dance. It's a theater where all the major dance companies have and will continue to perform.

For some inexplicable reason (I've never been there), I regularly receive their e-mails. And I love it. Actually, I later discovered I had been in that space, when as Ira Joel Haber reminded me it used to be the Elgin Theater.

Recently, they announced on their "Joycestream"—a way they can keep in touch with people who love dance in a time when there are no longer any audiences—they sent me an announcement of a streaming of choreographer, once the manager for Trisha Brown's company, Stephen Petronio's dance group for what was to have been their annual Joyce Theater preview of "American Landscapes," performed by the dancers Bria Bacon, Taylor Boyland, Ernesto Breton, Jaqlin Medlock, Tess Montoya, Ryan Pliss, Nicholas Siscione, Mac Twining, and Megan Wright, along with guest performers Brandon Collwes and Martha Eddy, danced out their hearts.

I can't say I was particularly impressed by their dark blue body clothing—women in simple body stockings and men in high-rise shorts, which did not at all accentuate their supple muscular mid-body extensions.

But, in a sense, Petronio's choice was perhaps purposeful. This was a performance not about his dancer's bodies, but about their constantly shifting relationships—gay, lesbian, and heterosexual relationships through a long history of time documented through Howard and my dear friend Robert Longo's artistic relationship, a long friend as well of Petronio's (he recalls how his $50 charity purchase of one of Longo's "Women in the City" drawings was one of his very first art purchases, leaving him to have to absent himself from lunches for a full week) led to a close friendship.

The images, along with the insistent drive of the music composed by Jozef van Wissem and Jim Jarmusch created, with Petronio's choreography, a kind of tri-partite structure, despite his intended abstraction.

The first part, in which the dancers moved from left to right clearly represented a shift from the East to the West coast. 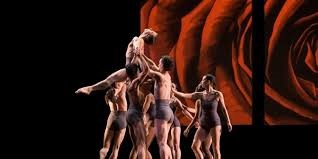 What begin as duos and triplets moving forward in lateral space, in the second part was represented, along with Longo's increasingly violent imagery—from an almost pastoral setting, to the nuclear terror of World War II and the post-War years—to a kind of strange line-dance, despite the failure of some of the performers to survive it, dropping away from the linked hand-upon-hand framework of the almost Fosse-like chorus line. Indeed, several of Longo's images, including his glorious swirl of dark red roses suggested iconic images from film, this particular one from Vertigo, but others from The Magnificent Ambersons, 2001: A Space Odyssey and other films.

In the third section, as the figures moved through space in the other direction, couples paired-off into gay and lesbian relationships, which seemed to suggest to me the traumatic shifts that occurred in New York City in the AIDS epidemic, the horrifying 9/11 events, and, of course, the impossible to comprehend current virus events.

Yet, even as events got worse, Longo's images moved to an almost prelapsarian return to nature, even if the images were a bit blurred and dripping with the blood of the past.

Petronio's ballet is a profound statement that speaks of our early longings and impossible failures, including those of our current time. The performance at the New York Skirball Center
was not only about the American landscape but, in a true sense, about American history itself.

Reprinted from USTheater, Opera, and Performance. (May 2020).


Posted by Douglas Messerli at 3:35 PM