Benjamin Endsley Klein (with contributions by Holland Taylor, writer) Ann / the production I saw was a taped version of the play from 2016 at the Zach Theatre in Austin, Texas

Were it not for the topnotch acting of Holland Taylor—dressed in a handsome Chanel white suit, a bowl-like wig of gray curled hair planted upon her head, with a continual application of bright red lipstick—Ann, the one-woman play written and directed by Benjamin Endsley Klein (augmented by stories told to Taylor by friends of the woman she portrays, Texas Governor Ann Richards) might have several times lost its energy as this work moves from Richards supposedly giving a Commencement speech to graduating college students, to a discussion of her life as a child, her marriage and its failure, her attempt to be a perfect wife and growing alcoholism, and her first political role as a local commissioner of Travis, Texas—all before we’re made privy to what a full day might have been like during her tenure as Governor of Texas. Fortunately Taylor doesn’t let the action and the play’s one-liners lose momentum for one moment, except perhaps for the very last scene where she preaches the importance of not perceiving government as an issue of “them” and “us,” insisting that, each in our own ways, all should become involved with the government. 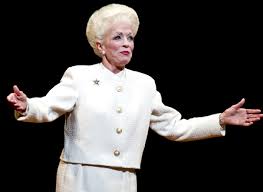 Richards, if you are too young to remember, first came to national attention at the 1988 Democratic Convention, beginning with the comment that she is glad to be speaking there on that evening because “after listening all these years to George Bush, I figured you needed to hear what a real Texas accent sounds like.” “Twelve years ago Barbara Jordon, another Texas woman,” Richards continued, “also gave the keynote address to this convention, and I figure two women in 160 years is about par for the course. But if you give us a chance, we can perform. After all Ginger Rogers did everything Fred Astaire did, but she did it backwards and in high heels.”

Howard and I were there through a live-television broadcast which almost immediately made every Democrat in the country fall in love with her.
Playing this larger-than-life figure with uncanny preciseness—as The New York Times reviewer Charles Isherwood put it, “If you can spy even a crack of daylight between actor and character in this performance, you’ve got better eyes than I do.”—hardly missing a beat between her clear adoration of her towering (6 some feet) father—who took her on regular fishing trips as well as to the local town storefronts, where, as one of the “good ‘ole boys,” he lovingly allowed to enter his world, and her impossible to please mother, who after attending one of Richards’ most famous speeches, gushed her pleasure not over her daughter’s words, but the fact that she had been able to meet the local weatherman.
Ann was clearly blessed, so she felt, by her marriage to the noted Civil Rights lawyer, Dave Richards, quickly attempting to become the more-than-perfect-wife, celebrating and hosting his many friends with large family dinners, as well as helping with his several law cases. Her reward for all this activity, as she recounts, was a few vodka martinis at the end of each of her long days.
By the time her friends got around to telling her that after a few martinis she was a different woman, encouraging her to join AA, her marriage was also beginning to fall apart. As she humorously summarizes her experience: “I musta drunk eleven hundred thousand martinis by the time I landed in A.A. — and by then, I was this big ol’ county commissioner! So I like to think I broke a barrier for politicians with an addiction in their past. And nowadays, hell, you can’t hardly even get into a primary unless you’ve done time in rehab.” 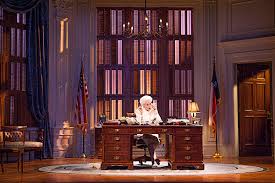 When she, despite these issues, was elected as Governor, we are treated to a set imitating her office in the State Capitol where, for nearly an hour of the play, she barks orders to her off-stage secretary and speaks on her phone to a wide range of figures, including Bill Clinton, to whom she attempts to pitch a successful program, started in Texas, for Federal implementation; blows up at her financial advisor who, afraid of even visiting her office, must tell her that he has improperly vetted a supporter who has flown her on his airplane to a Texas event—meaning she will have pay the $8,700 some bill out of pocket (as she bemoans, that’s more than I get paid for two months); cajoles her children to attend a planned family dinner, assigning them each a ham, pies, and a turkey (when that youngest son seems leery of even attending since at the last such event, his older brother has assigned him the near-impossible, to act out Rob Lowe’s sexually orgy for a game of charades) which ends her belting out “All right, I’ll bake the turkey!”; insistently berating a female aide for never being in her office; and ordering up cowboy boots for her entire staff and other friends as gifts of appreciation—all the while signing requested autographs, planning for that evening’s speech she is to deliver in El Paso, while a quick return so that she might meet with her lawyer after she is determined to grant a murderer on death row a stay. 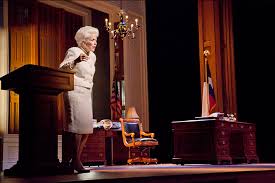 After all of that, is it any wonder that she nearly forgets to return her heels to her feet, quipping: “You know, I’m getting more and more forgetful. Soon I will be able to hide my own Easter eggs.”

When she is defeated for a second term by George W. Bush—primarily over the issue of whether or not Texans can carry concealed arms (at another time, not presented in the play, Richards berated the younger Bush as “having been born with a silver foot in his mouth.”)
Without any money to speak of, and no obvious source of future income, she is fearful that she will end up in a trailer in her daughter’s driveway. But suddenly, she brightens, just as I was about to buy a bait and tackle shop, people began to invite me to lecture, and a large group of Democratic politics ask her to join them in New York, for they had causes while I had all the addresses.
Even with a less-than-perfect ending, this play is a delight throughout, as Taylor
takes her wise-talking hero on a walk through the past she so much deserves.
Richards died of cancer in 2006, but through her still many living friends and acquaintances, her larger than life persona, the fast-talking political diva came alive at the Vivien Beaumont Theatre in New York and in the numerous theaters in other cities throughout the country where Ann was performed. Even as a reviewer, I could not get tickets when it ran at the Pasadena Playhouse.


Posted by greenintegerblog at 1:10 PM