dancing with a dead man
by Douglas Messerli

As some critics, over the years, have commented, Eugene O’Neill’s last play, a kind of sequel to the then (A Moon for the Misbegotten premiered in 1947) unproduced Long Day’s Journey into Night, is a fragile work that needs a near-perfect cast to bring it to life, reiterated, almost, by the various lengths of the play’s runs.
The original Broadway production, directed by Carmen Capalbo, despite some first-rate actors in Franchot Tone and Wendy Hiller, lasted only 68 performances, a flop by any definition. Its failure also meant the playwright’s break with the Theatre Guild, who had previously produced a great many of his works.
The Off-Broadway revival of 1968 by the Circle in the Square Theatre, directed by Theodore Mann and starring Salome Jens as Josie, ran for less than a week.
The second Broadway revival of this play at the Cort Theatre, directed by David Leveaux, in 1984. Kate Nelligan, as Jocie, was nominated for a Tony, but it ran only for 40 performances, even less that the original production.
The third revival, directed by Daniel Sullivan in 2000 at the Walter Kerr Theatre, with Cherry Jones as Jocie, lasted a bit longer at 120 performances. Perhaps by that time audiences had grown somewhat more accustomed to O’Neill’s longish monologues, the tough-and-rough language of Jocie and her father, and the long pauses in the rhythm of the play.
In 2007 there was yet a 4th revival at the Brooks Atkinson Theatre—starring the wonderful Eve Best as Jocie—which lasted for 2 ½ months, after a 112-performance run at London’s Old Vic.
As dreary as these figures are, however, there was one extremely important exception, revealing the effectiveness of this play.
In 1973, José Quintero directed three actors with long careers and life-long devotion to O’Neill works: Colleen Dewhust, Jason Robards, Jr.,—who later performed the same character, at a younger age, in the 1962 film version directed by Sidney Lumet.
For the acting in this production both Dewhurst and Ed Flanders as her father, won Tony awards, as the play when on to run for 314 performances (a solid run for a serious Broadway drama), and is pretty much recognized now by most critics as the definitive production. 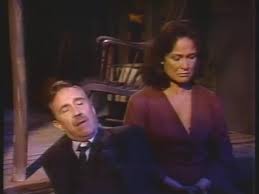 As O’Neill scholar Travis Bogard wrote: “Doomed to failure without superb acting…no subsequent production ever recreated the magic of those 314 performances.”

That version, after its Broadway run, went on to be performed at Washington D.C.’s The Kennedy Center, where, amazingly, Howard and I saw it also in 1973.
Yet, I remember little of it, only perceiving it fully in the ABC taping of the same production, which I saw yesterday. The film received 5 Emmy nominations, with Ed Sanders winning the award for Supporting Actor.
O’Neill’s A Moon for the Misbegotten in terms of plot, is hardly complex. The work begins with with the farmer Hogan’s (Flanders) third son, Mike, escaping the hard work and abuse from his father he has had to endure for most of his life to live with his two other brothers. His sister Jocie, abets that escape, even producing the boy with a few dollars she has stolen from her father’s money box.
She remains in good stead with the now furious father through her bluster, her quick-witted tongue, and a large stick she holds onto so that her father can feel justified for his inability to beat her for her participation in the betrayal.
Their hardscrabble farm is owned by Jamie, now spoken of as Jim and Jimmy, whose father, the noted actor James Tyrone, Sr. one day inexplicably purchased it. The younger James is a regular visitor to the farm, loving to chat with her father, and secretly in love with Jocie, who also has the reputation of being the nearby town’s whore, a moniker she seems herself to encourage.
Yet James realizes the lie of that boast, perceiving her (correctly) still as a virgin, and finding her tall, somewhat imposing stature (She describes herself “a cow of a woman”) as a thing of beauty. 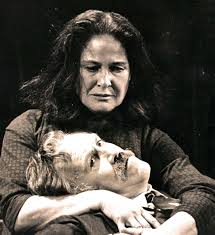 If in the early scenes there is a great deal of coming and going, James paying them a visit to announce that their wealthy, pompous neighbor Steadman Harder will soon be paying them a visit to protest the fact that Hogan’s pigs occasionally escape their pen and slip into Harder’s pristine pond.
But the major events occur in the second act in a series of non-events surrounding the central two figures. We first glimpse Jocie, attired in her best dress, including socks and shoes—throughout most of the play this Amazon is barefooted—awaiting the would-be lover who is now several hours late.
Furious, she pulls off her stockings and shoes, as her father finally returns from the same nearby bar where he has gone with James.
Under the cover of drunkenness, he angrily complains to his daughter that they can no longer trust James, since at the bar their landlord has agreed to the now outrageous price for their worthless farm for $10,000, enough surely that Jim might return to New York and his “Broadway tarts.”
Still furious for being stood up, and now hearing what she believes as the truth, Jocie plots revenge. If her father will bring James to her, she will drink with him (she is a near teetotaler), getting him drunk before carrying him in her bed, while her father and others he brings with him at daybreak will attest to sexual misconduct, allowing the Hogans to get back the $10,000 which they know he will pay out of guilt.
Hogan goes off, but James, hours late, finally does finally show up, while Jocie attempts to get him soused. Knowing her as well as he does (he has long perceived the lie of her sexual indiscretions), he refuses to allow her to drink.
And as they two talk in the moonlight, she gradually uncovers the truth, that the offer from Harder was verbally accepted only so that the next day he can again refuse him, bedeviling the vile, rich neighbor.
Recognizing his honesty, Jocie nearly swoons over a couple of kisses between the two of them and his frenzied head buried on her lap, as he alternates between coherent banter and almost shrill drunken memories that continue to haunt him.
Allowing herself to be taken in love, she brings him into her bed, where he quickly, again in his drunken state of mind, attempts to rape her, she running from the room declaring that she is not a “whore.”
He apologizes but also suggests it may be good that she has seen him like that, his real self who would totally destroy her if they become more romantically entwined. 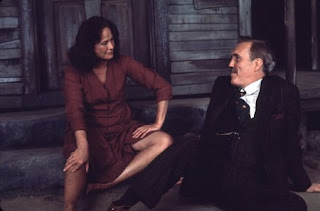 Finally, he drunkenly mumbles out the terrible story of how, upon his mother’s death and, with her coffin in baggage, during his voyage to her final burial he called each night for a $56 dollar whore with whom he had sex. He was so drunk by the time they reached their destination that he missed his mother’s final funeral.
Jocie is shocked, but ultimately forgives him, and realizes that he has told her something he had told no other. She allows him to rest on her lap for the rest of night, only awakening him with the sunrise.
The result is obvious since James is off to New York by the end of the week, probate on the family home finally coming to an end.
Not only has Jocie realized the truths of his private confession, but accepts it as an unconditional offering of love, while still perceiving that the man whom she loves is actually, like his entire family except Edmond (O’Neill) who is extremely ill ghosts.
What most fascinates me about this dance with a dead man is Jocie’s—and to a certain extent James’— constant effort to pull and push away from one another while at the very same moment they entice each other back into embrace. It is truly a kind of dance with death punctuated with fearful hope and utter disgust. By the exhausting end of this “dance,” Jocie can hardly walk, so tied up in knots are her legs for holding and protecting him all night.
But by the daylight, when her father returns, claiming it was all scheme, not for the money, but to bring the two of them together, his daughter has grown strong knowing that once in her life she did possess love, even if it was delivered from the dead of the Tyrone family. She threatens to finally leave her father, but by the end of the play remains with him.
And it is, ultimately, this alternating sense of love and rejection which makes O’Neill’s work so very brilliant—even if it takes only great actors to achieve it on stage.

Posted by greenintegerblog at 10:35 AM