to stop breathing
by Douglas Messerli

Lanie Robertson (libretto), songs sung by Billie Holiday sung by Audra McDonald Lady Day at Emerson’s Bar and Grill  / 1986, the filmed TV production I watched on July 17, 2020 was from 2016.

Talk about coincidences, which visit me on a regular basis, on July 17 I had a hankering to finally watch Audra McDonald’s performance of Lady Day at Emerson’s Bar & Grill, a one woman show, with great contributions by Billie Holiday’s pianist and conductor, Jimmy Powers (Shelton Becton), Clayton Craddock on drums and George Farmer on bass. That show, after rattling through dozens of small regional theaters, had its Broadway premiere in 1986 at the Circle in the Square, transformed by director Lonny Price and set designer James Noone by slightly lifting one end of the stage to allow a select few theater patrons to be seen seated while discretely drinking at small tables as they witness the devastating fictional performance only about three months away for Holiday’s death. 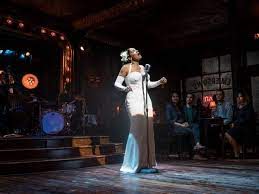 I had so long postponed watching the work for some of the very same reasons that the theater critic of the Los Angeles Times, Charles McNulty observed: “I must confess that I had my qualms. When one recalls Holiday’s sublimely ruined sound at the end of her career, the period in which Lanie Robertson’s concert drama is set, one doesn’t think of McDonald’s soaring, Juilliard-burnished soprano, a gold medal voice still in its athletic prime.”
What I had entirely forgotten was that “The Day Lady Died”—the title of one of my favorite Frank O’Hara poems who last three stanzas read—

I go on to the bank
and Miss Stillwagon (first name Linda I once heard)
doesn’t even look up my balance for once in her life
and in the GOLDEN GRIFFIN I get a little Verlaine
for Patsy with drawings by Bonnard although I do
think of Hesiod, trans. Richmond Lattimore or
Brendan Behan’s new play or Le Balcon or Les Nègres
of Genet, but I don’t, I stick with Verlaine
after practically going to sleep with quandariness

and for Mike I just stroll into the PARK LANE
Liquor Store and ask for a bottle of Strega and
then I go back where I came from to 6th Avenue
and the tobacconist in the Ziegfeld Theatre and
casually ask for a carton of Gauloises and a carton
of Picayunes, and a NEW YORK POST with her face on it

and I am sweating a lot by now and thinking of
leaning on the john door in the 5 SPOT
while she whispered a song along the keyboard
to Mal Waldron and everyone and I stopped breathing
…actually occurred on July 17, 1959.

Well, I didn’t at all have to be skeptical about McDonald’s performance. Not only does she appear to get most of Holiday’s eccentric lyrical phrasing right, her often drop of the final syllables, and the intense alternation of alto and soprano vibrato, but she quite stunningly portrays Holiday in the  last days of her life in which the great singer was not only alcoholic—which makes for some highly dramatic dips and near falls, particularly when she attempts to take the few steps down into the audience space—but very much still under the influence of heroin, the marks of which she has attempted to cover over by wearing long white half-gloves that perfectly match what critic Marilyn Stasio described as “a while column gown.” 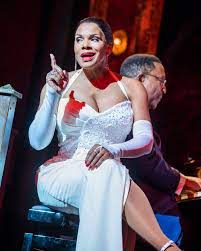 McDonald also fragmentarily tells some of her life story through the use of what singers generally describe as banter between numbers—even though, in this case, the talkative interludes slowly begins to outnumber the music. Holiday first explains her distate of even being in Philadelphia, where Emerson’s exists, relating one of her favorite quips: “I used to tell everybody when I die I don’t care if I go to Heaven or Hell long’s it ain’t in Philly.” Later, she reveals the reason: it was in the city of “brotherly love” that a judge sent her away to prison for processing drugs, possibly smuggled into her suitcase by her then lover the trumpeter Joe Guy, who introduced her to heroin. Her jail sentence resulted in her losing the all-important New York license to play in cabarets and clubs, which she explains is why she is now at Emerson’s.
Of course, at no time in her life did Holiday reveal, particularly as banter between songs, so much detail about her painful life. As Stasio writes:

Robertson’s script is unrealistically stuffed with just about every
known biographical detail about her unhappy life. The mother
(“the Duchess”) who got her chubby little girl her first housecleaning
job in a whorehouse. The humiliations she endured traveling
on club dates through the segregated deep south. The rotten bad
luck of falling in love with a no-good man who got her hooked on
heroin and set her up to take the fall on a drug charge. All that,
plus the appalling injustice of losing her cabaret card and being
banned from performing in New York.

By the time near the end, so drunken that she has descended to the bar to pour herself her own fresh drink, we are hardly surprised when Holiday somewhat offhandedly describes that as a young girl she was raped. The story that proceeds of her performance of the classic “Strange Fruit,” describes her travels with Artie Shaw through the South in which she was forced to eat in the kitchen and could only enter and exit through it. Having to urinate badly, she attempts to find out where “the colored bathrooms” are, but before she can uncover that secret, she is confronted by a highly bigoted waitress who tells her, in no uncertain terms, that there are no colored bathrooms in this establishment, and that Holiday is most definitely not wanted in this restricted world. Tired of the abuse, Holiday squats and pisses all over the legs and feet of her merciless foe.

Thank heaven, between these extremely dramatic revelations, McDonald still has the opportunity to sing some of Holiday’s greatest numbers, including the bawdy “Pig Foot (and a Bottle of Beer)” and “Tain’t Nobody’s Business If I Do” and “When a Woman Loves a Man,” and—after a break to get a heroin fix—the song she wrote for the Duchess, a somewhat bitter cry after she had been rejected a loan from her mother, “God Bless the Child.” But it is perhaps the song that is most atypical of her general oeuvre, “Strange Fruit,” that literally takes one’s breath away.
What’s truly fascinating about this work is in the renewed protests of “Black Lives Matter,” Holiday’s comments and life in general summarize so many of the current summaries of blacks wherein this theatrical vehicle, what many might simply describe as a musical entertainment, reiterates the issues of today.
This Lady Day, filmed at McDonald’s performance at Café Brazil in New Orleans in 2016, reveals the great singer as quite literally falling apart, yet still able in wise-cracking memories able to make even the most sour patrons giggle and through her singing force everyone to “stop breathing.”

Posted by greenintegerblog at 12:48 PM