some questions to ibsen about his ghosts
by Douglas Messerli

Henrik Ibsen Ghosts / the production I saw was a BBC television production in its Theater Night Series, originally broadcast on June 14, 1987

I must presume that nearly everyone who has and is currently reading my USTheater, Opera, and Performance website and the many volumes of my annually produced My Year will know something, and may even have possibly read Ibsen’s 1881 drama, which had its premier in, of all places, Chicago, Illinois in 1882, performed by a traveling Danish theater company, made up of mostly amateur performers.
This play, if you recall, is not a work about tragic figures who are punished for their refusal to live up to the society’s moral values, but are brought down, quite ironically, by their refusal to break the strict values of the late 19th century provincial world in which they live. 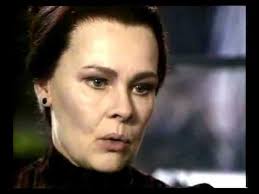 In particular, the seemingly saintly Mrs. Alving (quite brilliantly acted in this BBC production by Judi Dench), after long enduring her husband’s “degeneration”—which consists, evidently, of wine and women, including bedding the house maid Johanna—she rushes into the arms of her local pastor, Manders (Michael Gambon), for advice and, so it seems from her later confidences, perhaps even for love.

Insisting that she return home to help her husband defeat his devils—a common dictum even today among hypocritical spiritual advisors who order women to remain in the bondage of abusive relationships. Given the intelligence and fortitude Mrs. Alving naturally possesses, she returns, sending her young son, at a far too early age, to Paris to study art, she taking over her disinterested husband’s financial affairs which, upon his death, has made her a wealthy woman. Now, years later, she is able to build an orphanage in his name, partly a tribute to her guilty conscience and, at the same time, an attempt to close all debts, emotionally and morally, she may feel she still owed her entrapped husband—particularly after she has come to realize that as entangled as she was in a relationship of deceit, so was Captain Alving ensnared by close-minded values of those around him, including herself.
Into this hothouse of sorrow and guilt, her son Oswald (Kenneth Branagh), after having some success in his artistic career, returns to the isolated, always darkened but immaculately kept house, presumably to help celebrate the new orphanage, but actually because he is having difficulty in seeing which has sent him to a doctor who, as close as Ibsen himself is able to speak the truth, is diagnosed as having a “softening of the brain”—or, in modern parlance, the young man is suffering from inherited syphilis and will soon become blind. 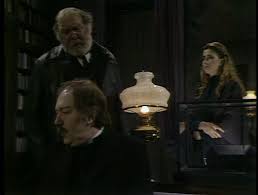 All of this is complicated by Manders’ visit to the Alving manse to deliver a speech for the opening of the orphanage, a time when Mrs. Alving also choses to reveal to him that her husband was the father of the beautiful young woman now working as her housemaid (Natasha Richardson), not the often drunken and truly hypocritical Engstrand, who by cozying up to the pastor has hoped to get his “daughter” to return to town with him, where he plans to open a “home for wandering sailors” with perhaps a little grant for his new enterprise as well.
As if things were not bad enough, Oswald appears to have taken a romantic liking to Regina, who unknown to either of them, are half sister and brother.
Now that I’ve refreshed your memories a bit, I have two major questions to ask, both of which, have troubled me since I fist read this play in Norway as a 16-year-old.
Although I here seemingly address these questions to the reader, they might also be send to be indirectly asked of the playwright himself.
Let me begin first with the problem of Engstrand (Freddie Jones), who is also the first character of this dark drama to express his chicanery. The savvy Regina immediately sees through his proposals to create a home for sailors, particularly when he insists that she come “home” to help him run it. The “home” clearly is to be a whorehouse, and the feisty woman whom Mrs. Alving has helped to educate wants nothing at all to do with it. Besides, it is clear that she has her eyes on the young son of the Alving family, who has previously promised to take her back with him to Paris. In secret she has even learned French. Indeed, Regina is quite openly embarrassed by her “father,” and several times insists he leave her and the house immediately.
Engstrand, while later pretending a newfound religiosity, invites Manders to lead the nightly prayers, a ceremony he claims he has instigated, for the betterment of his fellow carpenters.
Even a 16-year-old boy could see through his plot. As the candles are lit for the prayers, flames are ignited by the fresh sawdust of the construction, and the would-be orphanage quickly burns to the ground. Engstrand, certainly the firebug behind the orphanage’s destruction, can now freely, if somewhat subtly, bribe Manders into making sure that he receives some of Mrs. Alving’s remaining funds for his sailor’s home project.
Given Regina’s immediate recognition of her father’s intentions and Mrs. Alving’s knowledge that he is only the titular father of her husband’s child, how can Manders or anyone else—including Regina, when she finally learns of her true parentage, determines to become a prostitute in the tradition of her mother by returning to town with Engstrand—want anything to do with this scoundrel? Why has Mrs. Alving, knowing what she does, even hire him, evidently paying him well, to work on construction of the orphanage?
And, of course, Engstrand’s multiple deceptions—at one point even convincing Manders that in marrying Johanna, while ignoring the money she had been bequeathed by Mrs. Alving, married her simply out of love and caring for a girl in her predicament.
Hardly does Manders enter the Alving house, when he appears scandalized that Mrs. Alving is reading contemporary fiction, seriously warning her against their effects, although he has admittedly read none of them.
A short while later he convinces the benefactress that if she were to buy insurance to cover the new orphanage she (and more particularly he) might be subject to local talk about the necessity to insure something that stood for a godly belief in the betterment of the society around them, both town and country.
Later, he is outraged by the fact that Oswald has not only regularly dined with his artist friends, many of whom are unmarried and fathers of children, but that  Oswald speaks out so strongly for the natural morality of his friends as opposed to church teachings.
When we finally learn of his long-ago advice to Mrs. Alving and his refusals to accept her desperate love for him, we can only ask what on earth was behind Fru Alving’s attraction to this hypocritically babbling idiot in the first place. Even she, when Mandeers becomes convinced of Engstrand’s defense of his marrying the Alving’s housemaid, calls him a “baby.”
Why she has even allowed him—given her own self-revelations and her growing investigation of the narrow culture in which she lives—into her house, let alone into her financial affairs with the orphanage is almost inexplicable. Throughout much of Elija Moshinsky’s brilliant production, Dench is forced to sit in silent observation of this fool who seems more out of a comic opera or a play by Molière than the great Norwegian character drawn from Ibsen’s prolific pen.
In the end, I feel the Manders figure is almost a statement of Ibsen’s failure in this play. If the events of Ghosts with its series of recurring patterns that apparently cannot be contained by its characters suggests a truly contemporary tragedy, its stock figures such as Engstrand and Manders to not feel appropriate to a work that so dutifully explores the intelligent and inquisitive performances of actors such as Dench, Branagh, and Richardson. 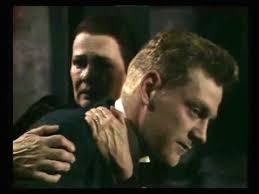 My only justification for Ibsen’s introduction of such fools is that, despite even the revelations of Mrs. Alving and the hard-hearted realism of Regina—we eventually learn that Oswald wanted her to remain close to him so that, when the time came when he would lose his sight, predicting that she would have grown tired of having to deal with such an invalid, Regina might willingly and mercifully have injected him with the morphine he brought back to Norway with him—it becomes apparent that the two would-be seers, each in their own way, are also quite blind.
It is only Oswald, unable now to see even the sun along the horizon of daybreak, who can truly see that for all their failures he now must die. His cry of “the sun, the sun” might almost be read as emanating from a kind of new Christ, crying out “Father, forgive them; for they know not what they did.”
The even the indecisive Mrs. Alving, syringe in hand, must now, like a kind of errant Mary, kill her immaculately-birthed* child.

*I use this phrase because in Ibsen’s play, Mrs. Alving, who would have certainly passed on her son’s syphilis, seems to be free of all its symptoms.