another country
by Douglas Messerli

In one of the best offerings by a contemporary theater company is this bleak year, The Public Theater is currently offering free on-line viewing of Jessica Blank’s and Erik Jensen’s play The Line from July through August 4th, evidently extended, since I saw this moving response of 7 voices who each served on the front-lines of New York City’s COVID-19 crisis on August 20, 2020.
The words these “talking heads” speak are their own, and do not represent composites so the credits read. But the fictional names represent nurses, doctors, and others who devoted months of their lives, while endangering their own health in order to deal with the growing terror of disease surrounding them and their patients, most of whom, they all assert were workers, primarily essential employees who kept grocery stores open, stood as guards for apartment buildings and businesses, helped to deliver the mail, and served in a hundred other jobs that kept those who had the financial abilities to quarantine themselves and work from home.
Their impassioned reports of the progress of the disease from a mere item of news that developed into the unspeakable pandemic which left hospitals without beds, ventilators, and even oxygen; that forced doctors to work 16-17 hour shifts in which they were required to make life-and-death decisions by choosing which patients might or could not receive their aid; demanded that ambulance drivers and paramedic workers make 3,000 and by the end of the epidemic up to 7,000 runs a day, while rejecting those who they recognized could not survive on the trip to the hospital; and required nurses wearing ineffectual masks to watch over those in their care without any visitations from family or friends, can only bring tears to the eyes of anyone with a shred of empathy. 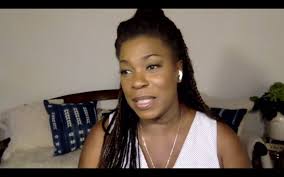 Two of those from which we hear, Sharon (Lorraine Toussaint) a manager at a senior residential facility and Vikram (Arjun Gupta), a doctor, come down with the disease themselves and, despite their own difficulties in getting proper treatment—particularly in Sharon’s case—survived.

Perhaps Vikram expresses the situation best as Jacquinn Sinclair summarizes that figure’s comments in her review in The ARTery:

As Vikram rides the subway, he notices that
most people on the train during the shelter-
in-place order are black and brown people
heading to or from work. After recovering
from the coronavirus, Vikram puts in some
time at a hospital in the Bronx. On his way
there he passes public housing developments
and he knows these are the people who will
fill the hospital. 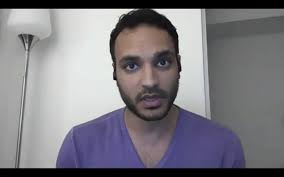 As another of the group later laments: I cannot get the vision out of my head of all the empty apartments of those hundreds who died. Who could even retrieve what they left behind.
Many of them, such as the first-year intern Jennifer (Alison Pill), are angry. Having observed in the public hospital in which she worked he dying patients lying in beds crammed into both sides of the hallways, and after being forced to jerry-rig and paste with masking tape machines that might help the sick to breathe after running out of ventilators, and, perhaps most importantly, being unable, given her rank, to even question the decisions of doctors and other supervisors working with her, she is justifiably angry. She felt suddenly, she recalls, as if she were living in “another country.” 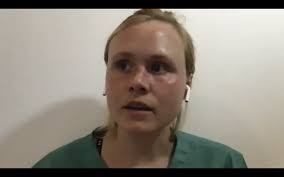 In one particular case, an elder patient kept attempting to pull off the mask pumping needed oxygen into his system, an act that meant a sudden loss in his pulse and his inability to breathe. Trying to explain to him that if he wanted to live he would have to put up with the burning sensations the oxygen masks produced, she finally taped the mask into place, while still checking on him hourly, only to discover, upon returning to work the next morning that someone had removed the patient in the night into a room, as she puts it, where “there were no direct eyes on him.” A technician has discovered him alone, without a pulse. “I worked so hard to keep him alive,” she moans, her eyes awash in tears.
Oscar (John Ortiz), a former actor turned Emergency Medical Technician, sees his own beloved Brooklyn-born uncle die in a hospital with less resources that the one in which he works.
When she is finally able to return to the nursing home in which she works, the black nurse Sharon finds that most of her favorite elders whom she had long almost stridently worked to protect and to demonstrate her love for are now “gone,” dead. When a grief counselor shows up, weeks after the worst of the events which the nurses under her supervision had to endure, she agrees to suggest they should attend, but refuses herself to be there. Furious for the fact that only after those working with her, not to mention the patients under their care, have been left alone to suffer without proper tools and distancing precautions, Sharon berates the belated one-day visit provided by the care-home directors who, she hints, are now also attempting to alter reports and emails to the facilitie’s advantage.
Ed (Jamey Sheridan), a 26-year veteran paramedic, is also fed up, in this case by being described as a hero, just like the firefighters were after 9/11. If we’re suddenly heroes, he argues, what were we before this disease, as we struggled our best to save patients from numerous other diseases every day. And what about those who man the desks that allow the patients entry, the janitors who clean up the surgery rooms and hospital halls, the cooks and servers who bring the nurses, doctors, and patients food, and the dozens of others who work hard every day to help New Yorkers to keep attending to their everyday lives. This is not about heroes, but about a long line of individuals, he concludes, who miraculously help everyone along their daily paths. If he has belief in the city, it is because of “the line” made up of giving and caring individuals who help to make everything going smoothly, even when everything seems to project despair. If these are not precisely the character Ed’s words, they stand for his uplifting summation of why, even in disaster, things eventually are resolved.
Asked to demonstrate more openly, after the crisis, his love of New York, Vikram explains that New York is wonderful, but it is also uncaring, lonely, and off-putting to many people. It is the combination of these facets and the diversity of who have these reactions that makes him love the city.
In the end, these citizens “on the line” together express some of the most powerfully positive sentiments in our terrifying and cynical-invoking times.
Check out The Line as quickly as you can (they stop streaming on September 1) to discover a theater-piece that is worth watching many times over.

Posted by greenintegerblog at 10:53 AM