the time is not now
by Douglas Messerli

Stand-up comedian, comic writer, and actor Hannibal Buress’ 2019 performance before a live audience, Miami Nights, is now being broadcast free on YouTube, in part because of the Covid-19 epidemic. It’s a gift that everyone should take the opportunity to see before it disappears. 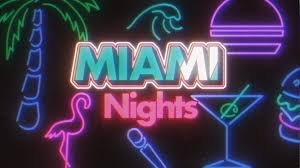 The very variety of Buress’ previous works on The Eric Andre Show, his briefer appearances on the talk shows of Jimmy Fallon, David Letterman, Jimmy Kimmel and others, as well as his own comedy shows and albums (Hannibal Buress Live from Chicago and Animal Furnace)  and a brief stint at writing for Saturday Night Live, has brought him a great deal of attention, but as he jokes, not enough to gain him universal celebrity. When people seem to recognize him, he generally responds, “I get that all the time,” and merrily walks his way down the streets without the adulation which he feels might hinder his life.
Soon after, he quips that twice a year he is asked to host a game show, answering in a god-like voice with a projection-screen fire raging behind him: THE PROPHECY WILL BE FULFILLED, BUT THE TIME IS NOT NOW. Indeed, Buress’ new work is about doing things at “the right time” in a world in which he and others can simply survive. 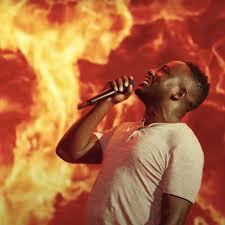 He admits to the audience that he has stopped drinking (“I want to choose the way I die,” he insists.) Preferably he would like to die from a rare disease that bares his own name “like Lou Gehrig Disease,” he jokes.
His asthma, and the lack of his friends’ appreciation for the seriousness of the problem is the subject of another short series of amusements.
As for the time to die, just like hosting another game show, a year in which thousands are dying from the pandemic and George Floyd and others have been killed by police is not the right time to go, he warily suggests, leading into the two major skits of the evening.
The first involves his arrival in Nashville, where the moment he enters a taxicab, the driver tells him that he can’t play his instrument in the cab. Having said nothing about playing an instrument or even carrying a case in which he might be hiding one, the comedian is a bit confused.
Without further ado, the driver reports that he had a passenger who played Kanye West the other day and kept singing his song “Nigger man, Nigger man, Nigger man.”
Buress was quite astounded; “yes, Kanye sometimes uses the first syllable “Nig” throughout his work, but has lots of words in between and doesn’t lay into the final r the way you did just now”; “I was thinking maybe I missed something on his first album College Dropout?”
He looks it up on his cell-phone. No such title appears, he reports to the cabbie. As the conversation continues, Buress begins to wonder is this a new form of racism. Do a group of cabdrivers meet monthly to ponder how they might enter into bigoted conversation without seeming to be explicitly stating their racist sentiments? 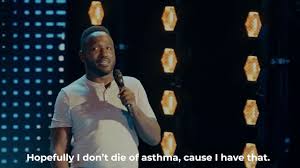 Soon after he begins an even longer retelling of his now famous arrest in Miami for disorderly conduct and drunken behavior. The comedian admits that he, having no food and water to accompany them, had far too many drinks: “How many drinks did I have? I don’t know. How many albums does Snoop Dogg have? (His audience laughs.) You don’t know either, you only know it’s more than 10 and less than 30.”
Realizing, however, that he was in bad shape, Buress left the bar and in front of a large mansion which was evidently hosting a Basel Miami art party asks a cop if he will call him an Uber, since the comedian has lost his cellphone, offering the pay him an extra $20.
The policeman, presuming he was one of the party guests, orders him off the street, the logic of which makes utterly no sense to our drunken friend. To “get it together” he retreats to another bar with the cop behind him, now insisting that Buress has to leave the bar because of his condition.
Clearly that leaves the performer in a difficult position in which he is seemingly trapped in a no-man’s land where he is not permitted inside nor outside, a kind of catch-22 situation from which there can be no escape.
Given the recent events surrounding Floyd’s meaningless death and the several others killed similarly by police that have been brought to light through the “Black Lives Matter” protests, however, Buress’ situation is even more troubling. As Alexandra Schwartz writes in The New Yorker:

…Mortality is also on his mind. ….”I want
my own way of dying.” he says. It’s a joke
about ego, but the unspoken subtext—about
the precise way in which a Black man in America
does not want to die—hangs in the air, to be
picked up in the story that the act has been
building toward….

His solution is to return to where he discovers the cop once more, speaking directly into the man’s body camera: “Hey, what’s up, it’s me, Hannibal Buress. This cop’s stupid as fuck.”
Buress, himself, admits it was probably not the best thing to say—despite it being absolutely legal—to a clearly riled-up man in blue. And the drunken performer recalls using even choicer language to describe and agitate the man who arrested him when they later reach the police station where the coper takes him, all of which might have been prevented if the cop might have simply taken the action of calling an Uber. Yet, putting his name directly into the body cam was probably the best way to put the incident on the record, possibly also preventing the now nervous law enforcer from taking a more private action. 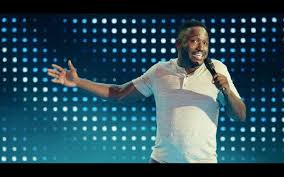 Buress’ case (with the help of a lawyer named Bieber) was thrown out along with a fine and the requirement to attend a day’s session about the evils of inebriation, during which, despite his best attempts, Buress was recognized by fellow attendees.
The cop, it turns out, was one of those who police chiefs mistakenly, in an act of ablution of their kind, describe as “a bad apple.” One of the many headlines from Miami newspapers describes the potential violence that the comedian might have faced that night:

For those of you who might not know what a Fireball Binge is, I’ll provide a definition: Fireball is a cinnamon flavored whisky manufactured by the Sazerac Company of New Orleans. The company itself describes the 33% alcohol liquid: “If you haven't tried it yet, just imagine what it feels like to stand face-to-face with a fire-breathing dragon who just ate a whisky barrel full of spicy cinnamon. Live it, love it, shoot it – what happens next is up to you.”
My Webster’s New World Dictionary identifies the word “binge” as “a drunken celebration or spree.”

Los Angeles, August 9, 2020
Reprinted from USTheater, Opera, and Performance (August 2020).
Posted by greenintegerblog at 11:47 AM