Douglas Messerli | "Where and When" (on Kaye Ballard: The Show Goes On")

It seems to me that I always loved the singer/comedian—and her talents don’t end there—Kaye Ballard, but that can’t, obviously, be true since the only role that I actually heard her perform (I must admit dozens and dozens of times) was in the 1961 Robert Merrill and Michael Steward musical Carnival in which she played The Incomparable Rosalie. I was only 14 at the time, and would not visit New York City until at least 8 year later; yet I fell in love with her—as well, I should add, with Anna Maria Alberghetti (who I did meet one evening years later), Jerry Orbach, James Mitchell, Pierre Olaf and the rest of that august cast—through her drunken rending of the love/hate relationship she had, apparently off stage as well, with the James Mitchell character, “Humming,” (she was brilliant at singing songs that represent a slightly tipsy chanteuse such as in her famous Rodgers and Hart rendering of “Where or When”) although I now prefer her performance in Carnival of “It Was Always You.” 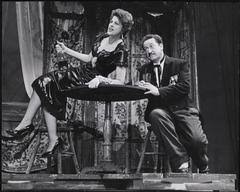 After reading a biography of lyricist John Latouche and while working on a piece on “My Favorite Broadway Songs,” I much later discovered her “Lazy Afternoon” from The Golden Apples, which easily made “My Favorite’s” cut. 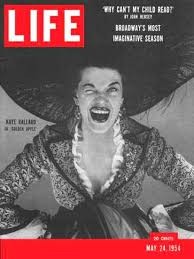 But I must have seen her as well on TV’s The Ed Sullivan Show, The Mel Torme Show or The Perry Como Show; and, of course, I saw her, without knowing it, in The Ritz, in which even the handsome Treat Williams couldn’t make me divert my gaze from her.

When last year an e-mail message suggested I might watch the Don Wingate special streaming-live production of Kaye Ballad: The Show Goes On, I immediately signed up and waited patiently until 7:00 only to be told that I could not enter the platform such I was viewing it through with two connections—the same problem Criterion had for a few weeks before they fixed it, despite the fact that my Wifi connection was my only entry onto the site.

I was highly disappointed, but knew that it would eventually show up somewhere else, which it did this past week when I watched it with great delight on the Los Angeles Laemmle Movie Theater streaming service. 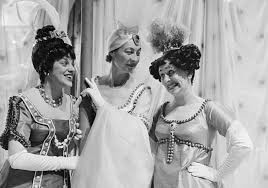 So I discovered I was not the only one who had developed a crush on this woman just because of her immense talent and openness. It seems that everyone—except Phil Silvers who treated her badly and cut most her songs from her first full Broadway show, Top Bananas—was her “very best friend.” Marlon Brando, Carol Channing, Eve Arden, Julie Andrews, Mimi Hines, Spike Jones (with whose crazed orchestra she first performed), Ethel Merman, Desi Arnez, Jerry Lewis (“I must have been the only American who truly adored him”) Judy Garland, Andy Warhol, Betty Davis, Alice Ghostley, Doris Day, Steven Allen, Woody Allen, Donna McKechnie, Liliane Montevecchi, Jerry Stiller, Ann Margaret…the list goes on. Many of these and others she also helped in their careers, since she often premiered the songs they later made famous, including “Fly Me to the Moon,” “My Man,” and “Cabaret” long before they tickled the vocal chords of Frank Sinatra, Doris Day, Barbra Streisand, and Liza Minelli.

In fact, Ballard was, in part, responsible for the hiring of Carol Burnett (after she turned down a stint on The Gary Moore Show), Streisand, Joy Behar and numerous others. She was a true “Broadway Baby” a number which she sang on a revival of Follies, yet she was so much more.

Singing for years in the most noted nightclubs in New York, including The Bon Soir, The Blue Angel, El Morocco, and elsewhere in Chicago, San Francisco, and Los Angeles, she would draw in the crowds and celebrities like Garland, Merman, Davis, Betty Hutton, and others just to watch her sing brilliant imitations of their own renowned performances.

After watching the tabulations of Wingate’s celebration of her life, it appears that except in her later years, Ballard was never without a gig, either in a nightclub, a theatrical revue (the old name for loosely bound musical entertainments), a Broadway show, a television series, or a film. Even the shows that closed out of town, such as the musical rendition of Molly Goldberg’s serial radio show The Goldbergs, Molly and noted composer Marc Blitzstein’s Reuben, Rueben were awarded deserved kudos by critics. She even famously played the flute. 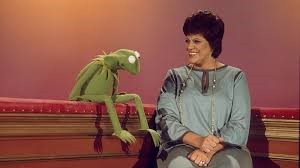 When one of the celebratory guests of The Show Goes On asks why, after she had become so incredibly famous hadn’t Ballard risen the very top of many legends with whom she was friends. He argues that it was, in part, the era in which she lived which demanded pigeon-holing performers. “The trouble was that Kaye Ballard was just too versatile,” he concludes.

It was certainly not a problem for her various audiences or even for me, who fell in love with her in a Marion, Iowa living room.

Posted by greenintegerblog at 5:40 AM