In this terrible time of the pandemic COVID-19, when theaters and most museums around the world are closed, some theater and opera companies as well as film festivals have been remarkably innovative in offering new works through open-timed, on-screen streaming. Given the demands of living intensely in quarantine at home with family, the idea that one can simply tune into these works at any time of day or night within the space of specific dates is a far more brilliant strategy that other performance-oriented organizations who have limited their screenings to specific hours and days, as if they were still locked-in to the rise of and close of the curtain.

One of the most innovative of these companies is the small San Jose Opera, which filmed Jake Heggie’s chamber work Three Decembers with its three singers (Susan Graham, Efrain Solís, and Maya Kherani),  and, in this instance, two pianists (Veronika Agranoy-Daafoe and Sunny Yoon, wearing protective masks) and conductor (Christopher James Ray), in a manner closer to MET-live HD productions, even subtly toying with the Metropolitan Opera’s backstage invitation to its audiences.

Indeed, stage director—and in this case video director—Tara Branham along with her set director Steven C. Kemp openly acknowledged their pandemic-skirting production by doing away with the proscenium stage altogether—except in the last scene wherein they celebrate the central character’s leave-taking of both the theatrical and human stage—by setting their production in a seemingly closed-down theater with clothes hanging on racks, chairs angled upon hooks, and, at least in one scene, employing the workmen’s metal scaffolding as a set, drawing in couches, tables, and a few props as needed. It is a bit like seeing an entire opera come magically alive on an empty stage that has temporarily closed down for the season—in short, a brave acknowledgment of the truth. Yet, here we were, those wonderful singers and musicians (who had apparently lived as a kind of pod-like family for the duration of rehearsals and filming) producing an opera as if we had just entered the backyard barn of some Mickey Rooney movie. 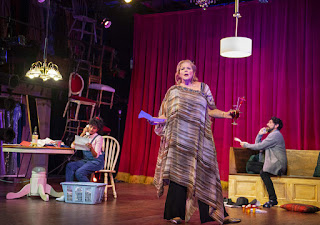 It also reminded me and at least one other critic (Harvey Steiman, writing on the blog Seen and Heard International) of earlier days of television glory when theater and opera were regulars on the smaller screen. Growing up I watched, with great joy, Gian Carlo Menotti’s Amahl and the Night Visitors with my mother for several years each Christmas. Perhaps with any luck, this “Christmas” or, at least, “December” opera will become a seasonal staple for contemporary home screen and computer-bound audiences.

As always Heggie’s shimmering and often dark, minor-keyed score served as a treasure to the ears, performed by the always powerful mezzo-soprano Graham as the dominating mother / grande dame actress Madeline (“Maddy”) well supported by Solís as her gay son Charlie and Kherani as her unhappily married daughter Bea. This trio was particularly convincing when performing as an ensemble in the very first scene which began as a musical reading of Maddy’s annual Christmas letter by Charlie in San Francisco and Bea in Hartford, joined eventually by the overbearing mother who, we can well imagine, even from the far away Barbados quite literally enters their own living rooms.

Graham is particularly stunning in her sudden “recollection” of their long-dead father and she unexpectedly—given her larger than life career—walking the Golden Gate Bridge, the young couple very much in love and stunned by the ocean on one side and the glorious view of the Bay City on the other. No matter how much we eventually grow to dislike this pushy prima donna we always recall that she was once a young innocent simply dreaming of her life ahead.

Unfortunately, that life led—after her husband’s death by a car accidently hitting him on a New York street—to an almost total abandonment of her children as Maddy took up a life in the theater, becoming a famous star and infamous mother who resents her son for having become a homosexual, unable to even remember the name of his companion Burt dying of AIDS, and even less attentive to her daughter’s plight of living in a marriage with college-age children and an unfaithful husband. For Maddy, as even she admits, the theater and all the illusions it represents are better than everyday life. One of the most poignant moments of the opera, in fact, occurs not in its glorious operatic refrains but in Heggie’s gentle spoofing of Broadway musical theater as Graham sings, as David Allen writing in Opera News describes it, “one stand-alone number, a ballad from Maddy’s otherwise unseen Tony Award-winning turn,...a knockout.” 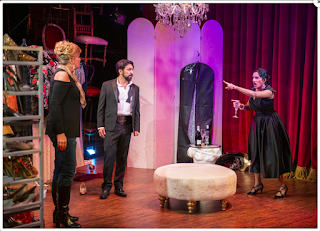 Actually, we never find out whether or not Madeline wins the Tony for which she has been nominated, but she surely wins the hatred of her own children, declaring as she does just before the award ceremony that for all these years she has hidden the truth about their much beloved and almost forgotten father (both were just young children when he died, and Charlie, as he longingly sings in an aria, remembers only a chair where perhaps his father once sat). He was not the loving man she has recreated for them, she brutally reports, but a failed alcoholic who, instead of dying in a drive-by accident jumped to his death before an oncoming subway train. Somehow it never registers in her momentous ego that her career might have also accounted for his alcohol consumption and his feelings of desolation.

When Maddy dies soon after, her children, nonetheless, give her an appropriately staged farewell, forgiving her despite the fact that even after death she returns—at least in their and our imaginations—to deliver her own eulogy centered around her egocentric philosophy to the effect of “life is so grand I’m glad I managed to attend it”—correcting her offspring even as they bid her and the audience farewell: “I’ve already said that!” 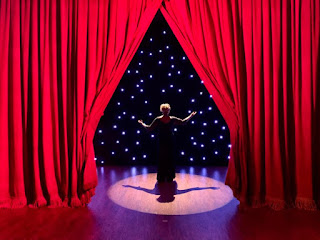 For all the wonderful music delivered through these singers performances, however, one might simply wish for a better scripted or at least less mawkishly sentimental plot. Based on an unpublished play by Terrence McNally (whose plays, I have to admit, I’ve always found to be hit-or-miss) Gene Scheer’s libretto makes even Charlie’s heartfelt sorrow over his lover’s death from the pandemic of another age and Bea’s conjugal loneliness—even Maddy compares her to her husband—seem more like whining than the true suffering they clearly experience. As Jerome Lawrence and Robert E. Lee’s character Auntie Mame proclaimed, “Life’s a banquet, and most suckers are starving to death”—a sentiment surely that this work’s Maddy would share. Alas, the villain of McNally’s and Scheer’s collaboration is far more interesting than those whose lives she devastated, apparently just suckers, the gullible and easily deceived children she left.

Posted by Douglas Messerli at 8:09 AM