the man who fell to earth

Comedian, actor, and playwright Paul Sand’s most recent play, The Pilot Who Crashed the Party—which received its premier workshop performance last evening, April 29, at the Odyssey Theatre in Los Angeles—might be best described as an odd mix of the absurdist-like work of Thornton Wilder’s The Skin of Our Teeth (undergoing a Broadway revival even as I write) and a late Edward Albee play such as Me Myself and I.

Like Wilder’s world, Sand presents us a gathering of individuals who, like most of us today after two years of a pandemic disease and a war in Ukraine, may soon find that we have “come through”—the phrase that D. H. Lawrence uses to describe his and his lovers’ psychological and emotional survival—a number of individual crises; but in surviving, each of them are now focusing very much on Albee’s “me myself and I,” fixated on their superficial lives despite their closely knit little society. 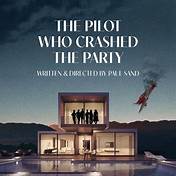 The occasion of their rainy night celebration is the 50th birthday of Sally (Jacqueline Wright) who is hosting the event in her Santa Monica Mountains home. With her is her housemate/companion Daniel (Lee Boek), best friends movie actor Laura (Megan Rippey) and Laura’s ex-husband, a bisexual gadfly Ilo (Irish Giron), and their friend Valerie (Debra Lane) who seems to be in charge of the meal and celebratory cake. Sally has hired a violinist (Yennie Lam) to accompany the evening meal and after dinner games, at which point the audience enters into their presence.

The game they appear to be playing as the work begins is a kind of live-version of the old board game Clue, in which the celebrants must guess which of their party has just killed one of their guests, in this case Ilo playing the dead man, a knife in his back as he sits dead at the dinner table.

This is clearly Daniel’s forte as he picks up an almost invisible thread from the oriental carpet, examines it, and traces it back to the red tab of a Band-Aid which Sally has placed upon her finger after cutting herself on the knife. But before they can truly close the case, the dead man announces that he simply has to go to pee, rises, and closes down the game.

Once more the night has become a rather dreary one, despite their clever talk and games, since the rainstorm seems to be one of those that descends upon the city only once every other decade. The creek below the mountain upon which Sally’s house sits has already overflowed its banks and turned into a torrent of mud, and the houselights are blinking of and on.

And as if a heavenly force had determined that very night to punish this little Sodom, the large-windowed villa is buzzed by a small airplane several times before crashing into the house, a wing landing upon the very dinner table where moments early they were all gathered. A moment later the pilot, dazed and confused knocks on their door. At the very moment of the crash they also lose their lighting and the use of their single telephone, cellphone reception in the mountains being unavailable. 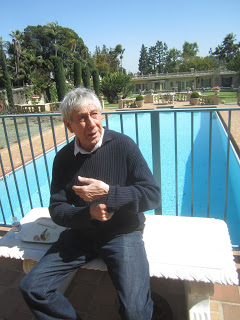 Before he can ever explain who he is, the young man (Sol Mason) collapses, as the startled houseguests and their hosts carry him off to a bedroom and Sally rushes to read her medical encyclopedia about remedies for brain hemorrhages.

Fortunately, the young aviator awakens to explain that his name is Anthony but that he can remember nothing else. He knows the names for objects and their purpose, but can’t recall whether or not he has a home or in it a worried wife. He seems to be convinced that it was his car that crashed into the house, not an airplane, particularly since he has never flown as far as he recalls and, as Erica Jong explains it, has a fear of flying.

Leaving him to get some rest the party guests re-gather to try to imagine how they might proceed, only to have Valerie recall that someone with a head injury should never be permitted to fall asleep since it may result in a coma. Accordingly, they rush in to pull him from his bed and throughout the rest of the play insist that he cannot for one moment sleep.

Realizing that with the storm none of them will be able to leave that night, Sally assigns the bedrooms to each guest, and arranges that they alternate a watch over their incredible guest.

That quirky plot device allows them each to get better acquainted with their handsome guest, as one by one they tell him their histories accompanied by the dramatic musical renditions of the hired girl, who herself attempts to follow the pilot around and charm him a bit like a gypsy violinist in a Hungarian restaurant.

Their stories, obviously, also help us to get to know the characters better, although it quickly becomes apparent that the tales they tell, even though they appear to be autobiographical, reveal more about the inner imaginations of these figures than their true lives.

Sally, for example, tells him a long yarn of a romantic adventure she has had in a small Brazilian town with a gaucho, replete with a white horse and a large silver buckle circling his denim pants. The tale sounds more like the kind of narrative one might hear on the famed Brazilian TV soap operas, so popular in South America, more than a real-life experience. But it is certainly entertaining and perfect for actor Wright’s flair for the theatricalization of the old kind of  melodramatic thee-a-ter!! She quickly becomes convinced that the unknown guest, like her, is a true romantic, suggesting—when they later play the game of “guessing the guest’s name”— that he has to an “ Erik.”

Down to earth opera singer Valerie believes it must be Bart, while Ilo, who keeps the young man entertained with stories of his and Laura’s travels through Italy where, he claims, they served as lovers to a wealthy polyamorous couple, insists that their guest is obviously gay, even if he hasn’t yet come out of the closet.

Laura insists that, like herself, he is deeply suffering inside, having been tortured by having lost, as she has 2 ½ times, someone whom she/he deeply loved.

But Daniel, who disappears throughout much of this play, has the strangest theory as to the origin of the young man. He insists that he is a threat to them all, having come to kill them; and, confronting the young man, he claims to not only know who he is but why he has been sent, which he maintains is from an FBI or CIA cell, knowledge he has gleaned from having served in Peru and other spots where spies have trained and been assigned. He knows, so he claims, because he himself has served just such a role, and now they have sent someone to get rid of him.

His paranoia becomes so overwhelming that ultimately he pulls a gun on the stranger threatening to kill him, the pilot saved only when Daniel’s friends restrain him and take away the gun.

As morning finally arrives and the storm abates, the pilot’s wife, Bess (Caroline Quigley) arrives to claim her errant husband, who she insists has long been a reckless adventurer, wrecking several airplanes and disappearing for months at a time. But he is also a well-known orthodontist with boys and a large dog at home. The moment he sees his wife, the Pilot remembers everything of his basically banal life—except for his adventurous moments of course. And he now has no memory of his amorous adventures that night with Sally.

The couple leave behind the stunned party guests, hardly believing the truth about the pilot who has so seemingly altered their own lives, Sally is particularly shocked. So disappointed with truth, they can hardly imagine that the woman really was his wife, that he has kids and a large dog home awaiting him. And then...well they now can’t find Daniel. Where could he have gotten to? They check out the entire house, the garage, and from the large window they search the landscape below without finding him. Maybe Daniel was not as paranoid as it seems. Perhaps Daniel was right?

If the play begins sounding a bit like Wilder mixed with Albee, by the end we perceive that it is perhaps much closer to an earlier “absurdist-like” play of the 20th century, a work that, as the darkness of World War I began to settle over a frivolous European world, would eventually change everything, creating the angst and chaos that helped, in turn, bank the flames for World War II and its aftermath. That play, George Bernard Shaw’s great comedic drama, Heartbreak House (1920), spoke of a heartbreak very different from the kind of which Valerie speaks, of a universal devastation of the soul the likes of which we are confronting still today.

We doubt the disappearance of one seemingly mad man from the Santa Monica Mountains will have much effect outside of this mad household, but symbolically it expresses just how little it takes to spark terror among allies when one recalls that it simply took the assassination of the Archduke Franz Ferdinand Austria, heir presumptive to the Austro-Hungarian throne by a Bosnian Serb student, Gavrilo Pincip—the Duke journeying through Sarajevo, Bosnia-Herzegovina, recently annexed by Austria-Hungry—to bring about the War that killed 15 to 24 million people, although perhaps a quarter of the imprisoned soldiers may have been killed by the flu pandemic of 1918.

And what if Daniel is truly a CIA spy, the pilot an interloper sent to get rid of him? It doesn’t take much for madness to embrace any individual, as these birthday celebrants make clear, particularly when people begin to remake others over in their own images of themselves.

Sand’s play perhaps needs a little tightening of its various entanglements, and maybe another director or Sand himself will be able to energize his other performers to balance the mercurial performance of Wright; as it is she tends to dominate a work in which the other talented actors seem waiting their turn to shine. Finally, as wonderfully frightening as the rain, lightning, and thunder is upon the stage, it needs to be tuned down just a little so that we can fully hear the witty script.

But these are minor quibbles about a play that is quite remarkable otherwise. I think this would also make a perfect film or TV drama.

Posted by greenintegerblog at 12:38 PM