As director Bart DeLorenzo writes in his short introduction to the program for the current production of Henrik Ibsen’s Ghosts, now running through October 23rd at the Odyssey Theatre Ensemble:

“I feel that 2022 is a kind of ‘after’ moment. Like we’re crawling out of the wreckage and we can finally look around at all the damaged, collapsed structures that have never supported what we want out of our world. And we can maybe see more clearly how we’re continuing to hurt each other and how we might progress. Like Oswald in the play, we’re asking the past, ”What kind of life have you given me? And as we rethink and remake our world, maybe we can begin differently.”

To me, at least, it appears that these days we are only digging in deeper into our own ghosts, haunting our own horrible pasts. Certainly the central subjects of Ibsen’s 1881 play read like headline banners of our tabloids and our entertainment news stations—as translator Richard Eyre reiterates them: the problems and effects of patriarchy and class distinctions, free love, prostitution, religious hypocrisy, heredity, incest, and euthanasia.

These obviously, were subjects that got Ibsen’s play Gengangere rejected for production by nearly all Scandinavian theaters—the play had its premier with a Danish touring group in Chicago in 1882—performed finally in Norway in 1883. Even the King of Sweden told Ibsen that it was not a good play. It was banned in England, just as today books with far lesser controversial subjects are being banned from libraries and schools all over the US. 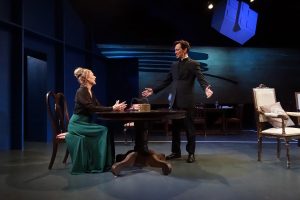 But even more disturbing than his outre subjects, perhaps, was his play’s unmitigated attack on bourgeois social and religious values, values still held by millions throughout the world and certainly in our country in this time of the rising pressures of conservative thought. Reverend Manders (here played by Barry Del Sherman) condemns nearly everything with which he comes in contact in the home of Helene Alving (Pamela J. Gray), from the books on social economics and women’s independence, to the way Helene has raised—or perhaps we should say, “not cared properly”—for her son, Oswald (Alex Barlas), having sent him away early to live in Paris to remove from the evils of her own home.

Manders dismisses the books even if he has never read them, and equally mocks the free lives of the Bohemian artists with whom Oswald has been living, without apparently having been to Paris. Oswald angrily defends the open relationships of his Parisian friends suggesting that they live more loving relationships with their unmarried women and bastard children than almost anyone he knows in the provincial Norwegian world from which he has come. And his mother argues that his views are no different from her own, an even more amazing revelation for the pastor who is about to spend a day and long night being shocked by the truths that are paraded before him.

No sooner has he finished his flustered conversation with Oswald than he brings up Helene Alving’s own past, which began soon after her marriage to the so-called “Captain” when she attempted to leave him, visiting her then youthful friend Manders, a young seminary student at the time whom she believed she loved him, to confess how her arranged marriage to Alving was simply untenable given his notorious drunkenness and womanizing.

Manders is proud to have refused temptation having sent her back to her husband, convinced now that she is about to dedicate a newly built orphanage on her own land in memory of her husband, that it’s all been for the best.

But Ibsen takes the opportunity, the long day before that dedicational ceremony, to allow Helene to catch him up on the facts, since he has dared not visit her since her “disgraceful” attempt to escape the marriage. In fact, so Helene reveals, the marriage did not improve, but merely worsened, Alving’s drunkenness and personal abuse of her increasing. Even his affairs grew more licentious as he nightly bedded her own maid, Johanna, who bore his daughter, the current maid of Helene’s household, Regina Engstrand (Viva Hassis Gentes). That fact even further inculpates Manders who, through Jacob Engstrand’s (J. Stephen Brantley) lies—he who is currently the head carpenter of the orphanage—has confirmed by his own signature Regina into the church registry as Jacob’s legal daughter.

Helene further reveals that it was not her husband who developed their land, making them rich, but she herself who usurped the duties he had abandoned, through intelligence and fortitude developing her farmstead into a source of income so that she can now spend precisely what was left of her husband’s estate on the false memorial of the orphanage, while leaving her own monies to her son at her death.

In short order, in other words, Helene reveals the mendacity, hypocrisy, and utter stupidity of men like Manders of her community, who advises her not even to take out an insurance policy on the new building because people might gossip about his own lack of faith in God to protect it. How Helene ever imagined that she once loved Manders, who even she describes as a “baby,” is one of the many mysteries of this play. 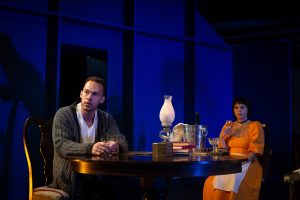 Once Ibsen has established his feminist heroine, one might have thought he could rest in his dramatic revelation of the mean and narrow-thinking patriarchal societies of provincial Norway. But the playwright does not at all rest on his abilities to demonstrate the rotten foundations of the lives of wives and children such as Helene and Oswald, but turns the table, so to speak, to show us even more startlingly how a strong-willed woman like Helene and even a free-thinker like Oswald are both facilitators and victims of such closed-off worlds.

Indeed, it is Ibsen’s remarkable analyses of how hurt and revengeful women such as Helene help create the worlds in which men like her husband attempt to escape, and how both of them working together help to pass on their own dreadful failures to their children that transform this play into a statement of global indignation. In this case, as nearly anyone who has even heard of this play knows, she has passed on deadly syphilis to Oswald, forced to visit not because he necessarily wanted to return to the barren and utterly boring wilds of small town in Norway but because of what the doctor has described as “the softening of his brain.” He has fevers, increasing blindness, and an inability to work.

Ghosts are truly everywhere in Helene Alving’s house, the ghosts of her own loves and those she has not permitted. But even that word “ghosts,” which Ibsen himself found as an unsuitable translation of “gengangere” which, as Eyre points out, literally means “a thing that walks again,” is far too romantic to convey the horror that both wife and son discover within themselves. Perhaps we should use the word “zombie,” that suddenly popular demon of our own time, to describe the specters of this work which are not afraid to devour the bodies of their own flesh and kind.

Even Oswald must eventually admit that he is repeating his father’s life with his temporary escape in alcohol and races around the table with Regina, although at least he recognizes that only she might be strong enough to finally, when things get really bad, to jab the syringe of morphine into his veins (in this play version, alas, the morphine comes in pills, which in fact is easier to swallow by oneself than by the force of another as we witness in the last scene). What Frau Alving and even Ibsen won’t admit is that her son’s syphilis could not be inherited from Oswald’s father except through a sore in her vaginal channel upon his conception—unless it was immaculate. 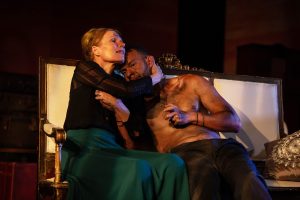 If nothing else, the horror tale that Ibsen tells is not in the least possible of being described as that most despised condition that both Oswald and his mother can imagine: boredom. If anyone who carefully watches the spiraling revelations of this work were to describe it to me as boring, I’d sentence them to engage with the endless jabber of fabrications of QAnon for the rest of eternity. For Ibsen’s play, as he and others now for almost a century have come to recognize, is sadly based solely on the dreadful truths of our often shabby lies and lives.

The trio of actors, Gray, Sherman, and Barlas, do a credible job of re-creating Ibsen’s house of horrors despite, at times, Richard Eyre’s somewhat rambunctious updating of the former staid British translations and his own devouring of a great deal of the poetry of the original.

For the most part scenic designer Frederica Nascimento did a decent job of condensing three separate rooms, living room, dining room, and bedroom onto one stage. But I cannot imagine what a series of boxes full of a jumble of objects spread out upon apron of the set might signify. I suspect it is meant to represent Captain Alving’s old mementos packed up and perhaps ready to be sent off to the orphanage when it opens. Clearly, it is meant to represent further aspects of the ghostly presences that surround Helene and her son. But it still creates a confusing blockade between the actors and the audience, the closeness of which is one of the delights of the Odyssey stages.

And finally, do we really did an upside down hanging symbol of the orphanage building ready to come crashing down when it all catches on fire and is ready to be destroyed—without insurance of course? To me it merely served as yet another scenic intrusion to an already very busy set and series actions as those who fight the fire return and leave the house.

But these are minor cavils in what otherwise was a most commendable production of play that seems suddenly very necessary, as DeLorenzo hints, for our own time.

Posted by Douglas Messerli at 12:44 PM